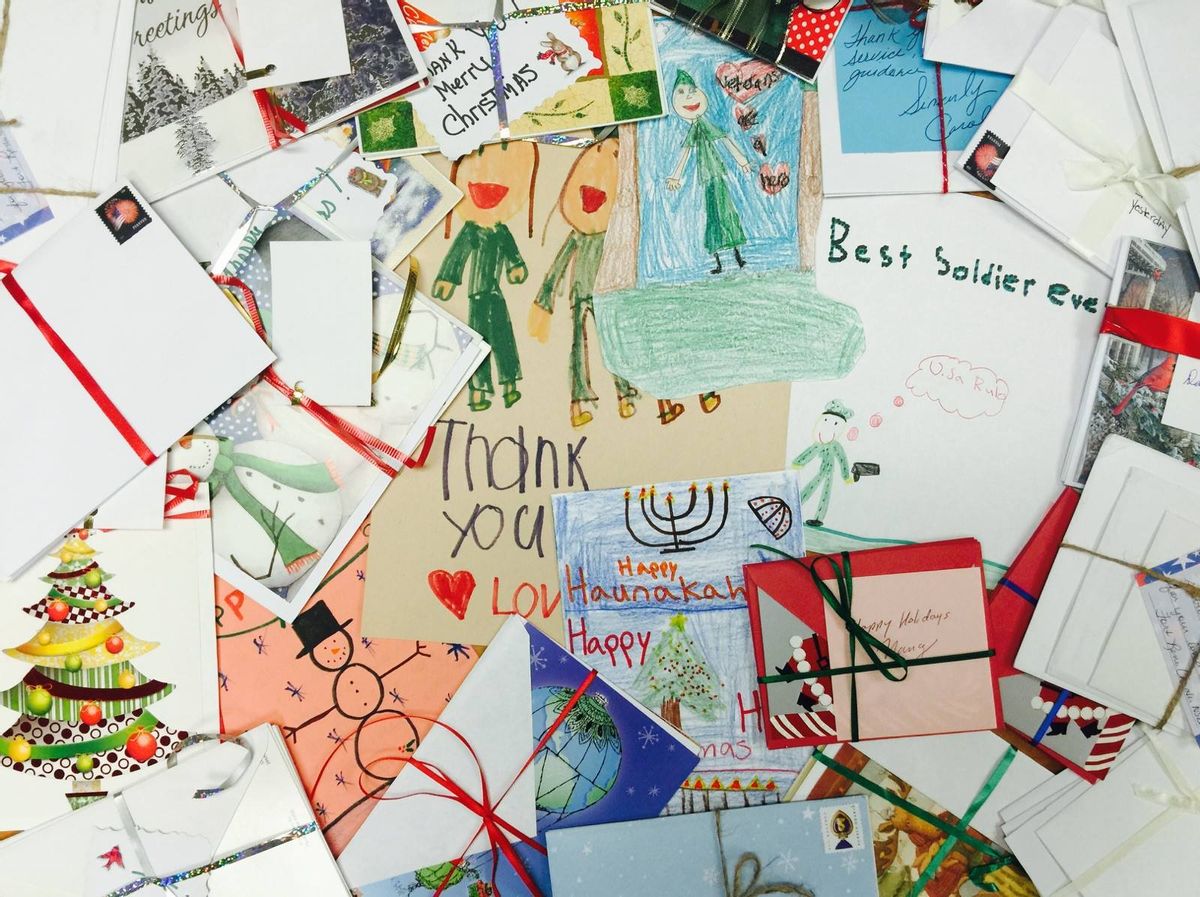 Perennial open-hearted entreaties are circulated online every year just before the holiday season, suggesting that Americans add "A Recovering American Soldier" to their Christmas card lists:

When you are making out your Christmas card list this year, please include the following:

If you approve of the idea, please pass it on to your e-mail list.

While no one can fault the sentiment behind the suggestion (not only to remember the less fortunate during the holiday season but to make a special effort to reach out to those who have been wounded in the service of their country), such exhortations are outdated: in these times of heightened security, mail from strangers to unnamed soldiers must be discarded unopened for everyone's safety.

The U.S. Postal Service will not accept mail addressed to "Any Soldier," "Any Wounded Soldier," or the like because if they did, it could be providing a conduit for those who might do harm to armed services members. Such offerings are either returned to sender (if a return address has been provided or if one is found within the package) or donated to charities (if no address for the sender is found):

Programs that allowed people to send mail to servicemembers unknown to them were discontinued following the terrorist attacks of 2001. Mail addressed as “Any Service Member,” “Any Soldier, Sailor, etc.” will not be accepted. If this mail is deposited into a collection box it will be returned to sender. Items without return addresses are opened in our Mail Recovery Center Network to determine the sender’s address. If it is impossible to determine the sender’s address, we donate care items to local charities.

Similarly, military hospitals will not accept letters, cards, or packages addressed in such manner for the same reason. Such beneficences, no matter how kindly meant, are not permitted to reach the soldiers they were intended for. Walter Reed Army Medical Center (WRAMC) officials echoed this information in a statement regarding public efforts in sending cards to unnamed soldiers who are recovering in the facility's care:

Mail to Wounded and Recovering Soldiers

Walter Reed Army Medical Center officials want to remind those individuals who want to show their appreciation through mail to include packages and letters, addressed to "Any Wounded Soldier" that Walter Reed will not be accepting these packages in support of the decision by then Deputy Undersecretary of Defense for Transportation Policy in 2001. This decision was made to ensure the safety and well being of patients and staff at medical centers throughout the Department of Defense.

Instead of sending an "Any Wounded Soldier" letter or package to Walter Reed, please consider making a donation to one of the more than 300 nonprofit organizations dedicated to helping our troops and their families listed on the "America Supports You" website, www.americasupportsyou.mil

Every year there is a Facebook Post that goes viral asking citizens to send Holiday Cards for service members, veterans and families receiving care to Walter Reed Army Medical Center. Walter Reed Army Medical Center, on Georgia Ave closed more than 5 years ago. Any cards sent to 5900 Georgia Ave addressed to "Any Soldier," or to "A Recovering American Soldier" will be returned to sender because the address no longer exists.

This year you can also assist a service member, veteran and their families by providing cards they can send home to their loved ones this holiday season. The deadline for all cards including Hanukkah, Christmas and Kwanzaa is Friday, November 30, 2016.

Items to include in each bundle:
3 blank holiday cards (same holiday per bundle and no glitter)
3 blank envelopes with postage stamps
1 short message to the service member (do not included contact information, only first name) Bundled with a ribbon

If you would like to continue sending signed holiday cards in the traditional sense, please contact your local Red Cross office, Military Treatment Facility or VA Hospital to obtain the local guidelines.