Did Members of the Migrant Caravan Paint a Swastika on an American Flag and Set It on Fire?

A photograph of protesters in the Honduran capital setting fire to a U.S. flag inflamed some Americans. 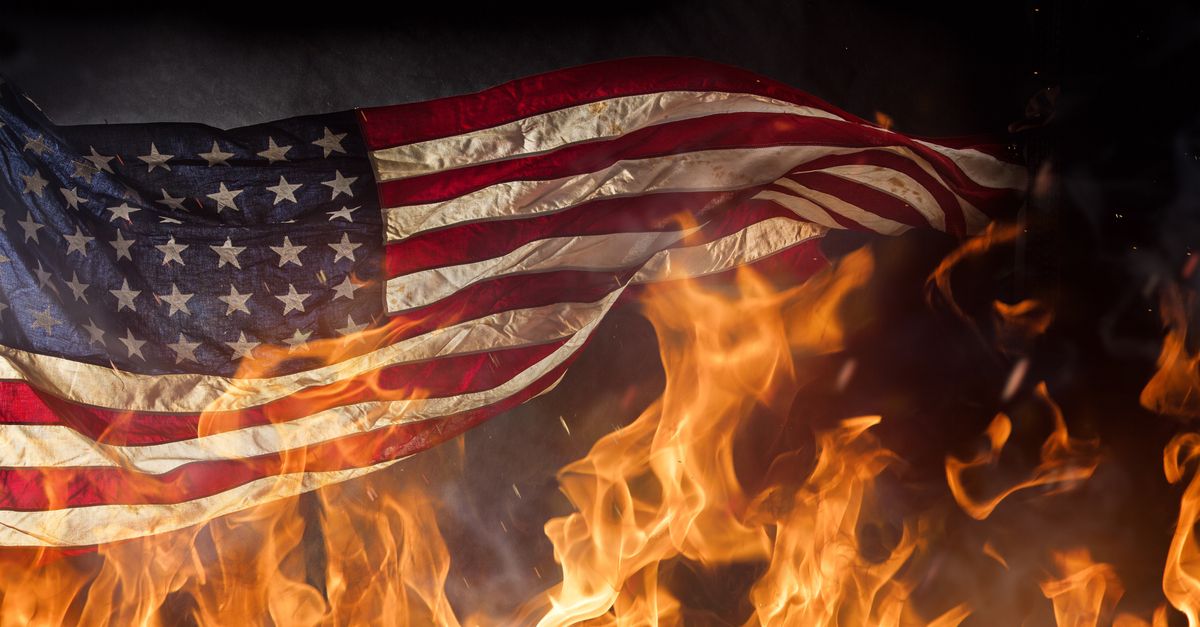 Claim:
Migrants traveling in a caravan from Central America to the U.S. drew a swastika on an American flag and set it on fire.
Rating:

On 22 October 2018, as thousands of migrants trying to reach the United States headed north out of Central America into southern Mexico, social media users shared an image some claimed to show members of the caravan defacing an American flag with a swastika and burning it: The image was real enough, but it didn't depict what many claimed of it. The picture was taken by Associated Press photographer Fernando Antonio on 19 October 2018 in front of the American embassy in Tegucigalpa, the capital city of Honduras, but the caption accompanying the photograph noted that at the time the picture was snapped, the migrant caravan was "stuck" at the Guatemala-Mexico border, hundreds of miles away from Tegucigalpa:

Two people burn a United States flag during a protest in favor of the caravan of migrants that is currently stuck on the Guatemala-Mexico border, in front of the American embassy, in Tegucigalpa, Honduras, Friday, Oct. 19, 2018. The U.S.-bound caravan that once totaled more than 3,000 Central American migrants looked to be about a third that size Saturday morning, when its remaining members woke up on a bridge that divides the borders of Guatemala and Mexico and waited to get past a crossing guarded by hundreds of Mexican federal police.

Unsurprisingly, some websites spread misinformation about the image with vaguely-worded stories. InfoWars, the conspiracy peddling network run by Alex Jones, reported under the headline "Hondurans Paint Swastika on American Flag, Set It on Fire; Wave Honduran Flags, Give Us the Finger" that "These are the people demanding we open our borders."

Right-wing blog Breitbart.com posted the picture with the headline "PHOTO: Caravan Protesters Paint Swastika on American Flag, Burn It in the Street."

Although the persons pictured were protesting the treatment of migrants traveling with the caravan, they were not themselves part of the caravan.

About 7,000 migrants started north from Honduras on 12 October 2018, and on the day the photograph was taken they were temporarily blocked at the Mexican border by authorities. After facing down riot police wielding pepper spray, many broke through the border fence separating the two countries and as of 22 October 2018 had reached Tapachula in southern Mexico.

Caravans comprise many asylum seekers, including women and children fleeing violence and hunger in their home countries. The activity has become the source of fear-mongering by U.S. politicians in the lead-up to the 2018 midterm elections.