A series of old photographs were re-shared as if they depicted members of a migrant caravan burning the U.S. flag. 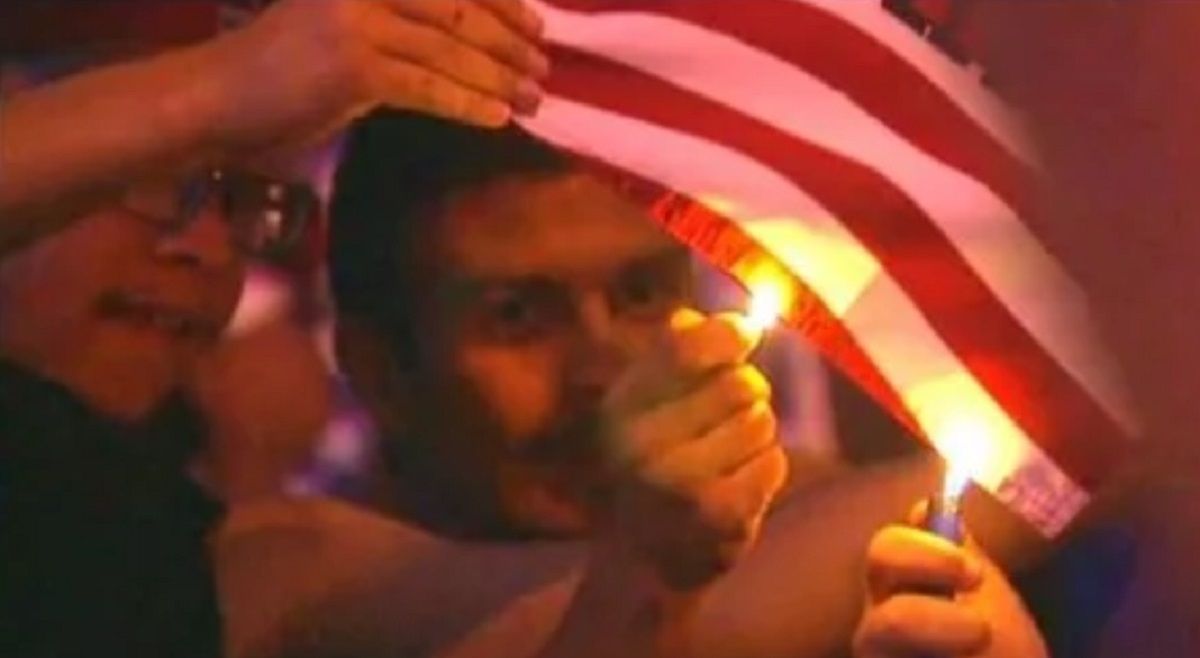 Claim:
A series of photographs shows members of a migrant caravan on their way to the U.S. in October 2018 burning the U.S. flag.
Rating:

In the fall of 2018, multiple attempts were made to paint the immigrant caravan traveling north from Honduras toward the United States as a violent mob with nefarious intentions. This group of migrants was falsely accused of attacking police officers, Congressman Matt Gaetz floated an unfounded conspiracy theory holding that the caravan was being funded by alt-right boogeyman George Soros, and President Trump stated (without evidence) that "criminals and unknown Middle Easterners" were traveling among the group.

On 23 October 2018, we came across yet another unfounded accusation of this nature. This time, a set of photographs of people burning the American flag was posted to social media along with the claim that the images featured pictured members of the caravan in the act of setting Old Glory ablaze: The illegal caravan of immigrants are flying the Honduras flag as they burn the American flag as they march towards the USA wanting asylum! They are not asylum seekers! They are invaders!

None of these photographs was taken in 2018, nor do any of these images picture persons traveling with the migrant caravan. In fact, the top picture doesn't even show an American flag being burned.

The photograph seen at the top was taken during an anti-Trump riot in Albuquerque, New Mexico, in May 2016. This image was used as a thumbnail for a video report about the protests by Fox News and is commonly shared as if it showed a man burning an American flag. However, the object being burned is actually a Trump banner with red and white stripes and not an U.S. flag. This difference is evident through a closer look at the upper-right corner of the image: The Trump banner burned at this protest is more clearly visible in the following video from KSAZ-TV:

The second image in this collage (showing a burning flag on the ground) was taken in 2010 outside of the American Embassy in London. This photograph is available via Getty Images, where it is accompanied by the following caption:

Demonstration Held Outside US Embassy Against Qur'an Burning Threats

LONDON, ENGLAND - SEPTEMBER 11: An American flag burns outside the American Embassy, during a protest in Grosvenor Square, on September 11, 2010 in London, England. US Controversial pastor, Terry Jones has sparked protests across the world after planning to stage an International Burn a Koran Day on 9/11, the anniversary of the 2001 attacks on the World Trade Centre in New York. Mr Jones has since postponed the event after sparking international condemnation and protests around the world. (Photo by Dan Kitwood/Getty Images)

The final image (featuring a woman in a "Revolution" shirt) was taken outside of the Quicken Loans Arena in Ohio in July 2016 and shows supporters of the "Revolutionary Communist Party, USA" burning a U.S. flag. The incident resulted in the arrests of a dozen protesters, including Gregory "Joey" Johnson, who was previously arrested for burning a flag in 1984. Johnson fought those charges and his case ultimately landed in front of the U.S. Supreme Court (Texas V Johnson) in 1989. The court ruled that flag-burning constituted a form of free speech.

Judge Charles Patton echoed the Supreme Court's 1989 decision when he dismissed the charges filed against Johnson in 2016:

"If there is a bedrock principle underlying the first amendment, it is that the government may not prohibit the expression of an idea without more that removes the idea from the First Amendment's protection," Patton wrote in dismissing charges of failure to comply, aggravated disorderly conduct and obstruction of official business. "... In the case pending before the Court, the defendants were engaged in the expressive conduct of flag burning. As repugnant as that behavior may be to some, Texas v. Johnson makes it plain that such conduct may not be sanctioned as breaches of the peace."

None of the images featured in this social media post shows a member of the migrant caravan burning a United States flag. One of the images doesn't even feature a flag, another was taken in London, and all of them are at least two years old.