Did Video Show Gosar Wave from US Capitol Window on Jan. 6?

Other versions of the same rumor claimed that the video instead showed Republican Rep. Andy Biggs or Randy Weber. 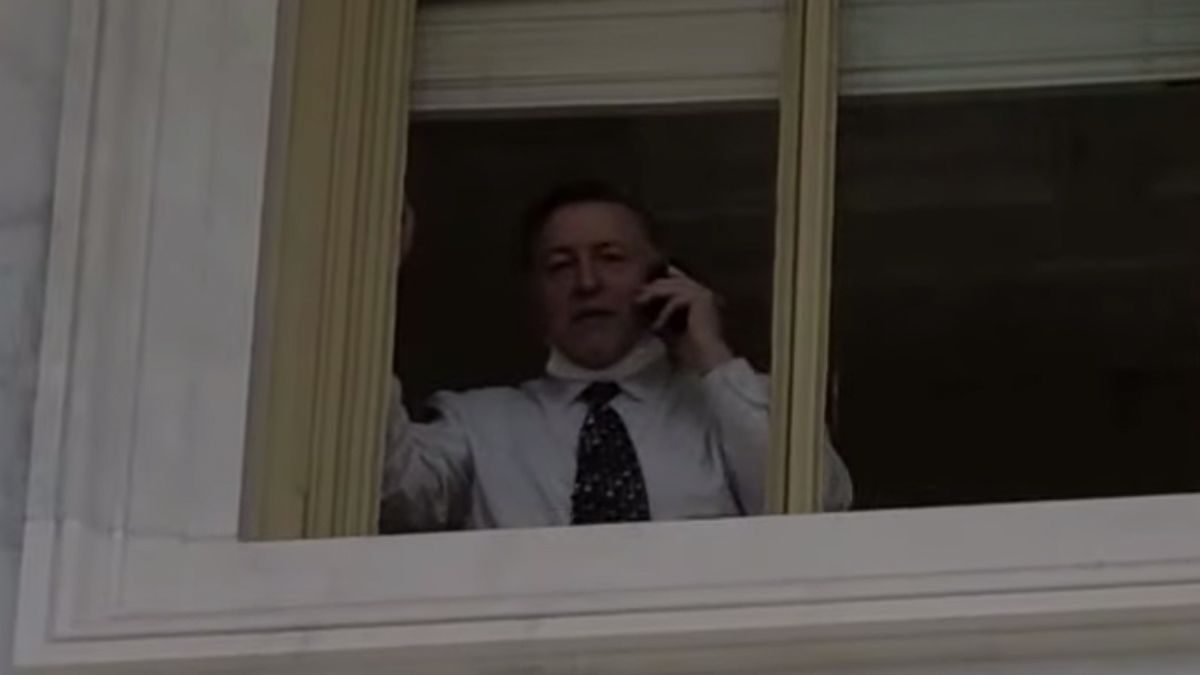 Ever since the U.S. Capitol riot in Washington, D.C., on Jan. 6, 2021, online sleuths have looked for answers about a specific video of a man waving at protesters from one of the windows of the Capitol building. The man who was waving wore a dress shirt and tie, leading many to believe he might have been a Republican politician who was sympathetic to supporters of then-U.S. President Donald Trump. One of the most mentioned theories was that the video showed Rep. Paul Gosar, a Republican who had made the false claim that there was widespread voter fraud in the 2020 U.S. presidential election:

One of the clips that was most scrutinized showed the man who was waving suddenly moving away from the Capitol window:

Some Twitter users theorized that the video showed Gosar being yanked away from the window by fellow Republican Rep. Mo Brooks, who also had said he believed the debunked conspiracy theory that there was widespread voter fraud in the election:

"This Jan. 6 video needs to be investigated," one popular tweet with thousands of engagements read.

Others believed the video showed Reps. Andy Biggs or Randy Weber. Both men also said they believed in the false notion that there was massive and widespread election fraud:

One of the tweets that theorized that the video showed Weber waving from the Capitol window received quite a bit of engagement:

After more than a year of theorizing, the case was finally solved by Twitter user and "sedition hunter" @K2theSky.

In a tweet, @K2theSky said it wasn't Gosar, Biggs, or Weber waving from the Capitol window, nor was it any other politician. Instead, it simply showed a journalist named Bob Agnew. On Jan. 6, Agnew was a U.S. Senate correspondent for Salem Radio Network news:

According to videos on Agnew's own Facebook profile, this was true. One clip showed that his face, dress shirt, and tie all matched the other video.

In the clips, he was simply following directions from law enforcement to stay put in a specific area of the building. According to all of the videos on his profile from that day, he spent time looking out of the Capitol window while narrating that he was waving at people who were waving and making "menacing signs" at him.

"There you see some supporters down there [for President Trump]," Agnew said in one of the videos. "Some of them are looking up to me. Some think I'm a bad guy. They think I'm a member of, I don't know, whatever part of the press they don't like. Some don't know who I am. Some are waving. Some are making menacing signs. But, here I am, basically trapped in the Senate radio and TV gallery."

The video even included a glimpse of the empty U.S. Senate floor:

Agnew responded to our questions after this story was published. On Nov. 2, 2022, he told us on Messenger, "I didn't fall but rather stepped down off the chair I was standing on to be that high by the window." This cleared up why he appeared to disappear so quickly from being visible in the window.

In sum, the man in the video who was waving from the Capitol window on Jan. 6 was Agnew, a journalist, and was not Gosar, Biggs, Weber, or another Republican politician, as previously theorized.

Nov. 2, 2022: This article was updated after we received a response from Agnew.