Just ahead of the fall holidays, a viral social media rumor suggested the pumpkin in pumpkin pie is secretly produced from other squash. 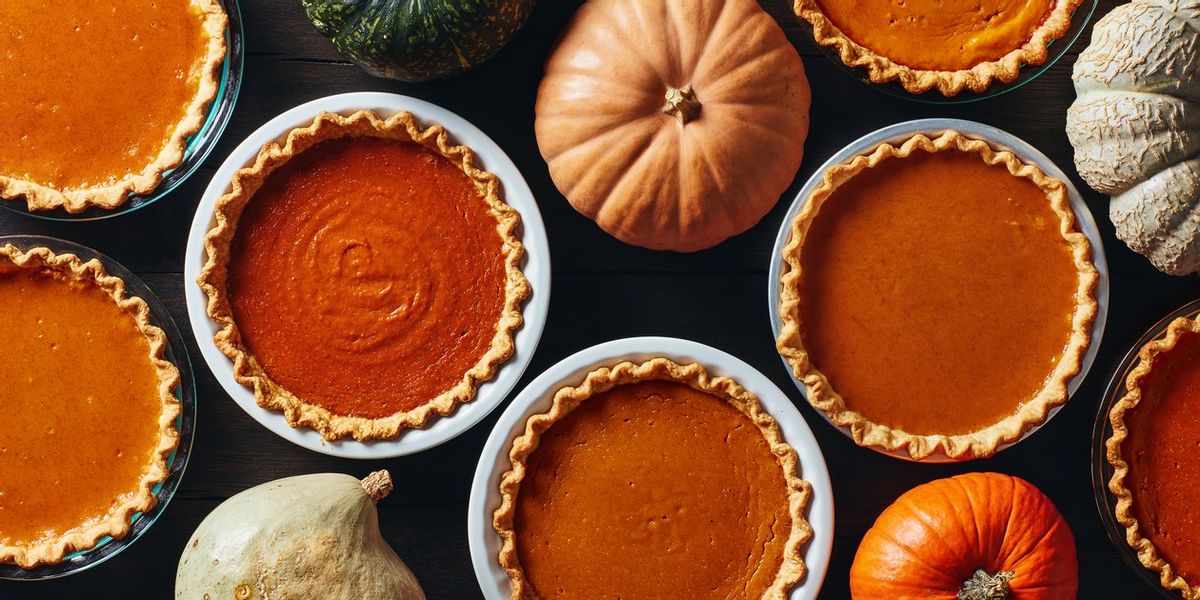 Claim:
Most canned pumpkin isn't actually pumpkin, but a mixture of other squashes (including butternut).
Rating:

As much of 90 percent of pumpkin sold in the U.S. (and 85 percent worldwide) is a proprietary cultivar known as a Dickinson pumpkin, which are less photogenic than the type of pumpkins commonly used for display purposes.

The majority of canned pumpkin is not a blend of butternut and other winter squashes.

On 23 September 2016, Facebook users began sharing an article which claimed that the pumpkin typically used in pumpkin pie is in fact a multi-squash blend containing little to no pumpkin:

I found out something extremely disappointing and concerning this week that has made me rethink most everything in my life, so I’d like to share a little PSA with the class ... Pumpkin puree is not pumpkin. It’s squash.

Pumpkin puree: You know, the canned orange stuff that’s lining the supermarket walls right now? The stuff you use to make all your favorite fall desserts that’s labeled “100% pumpkin”?! Yes, well, it’s actually made from 100% not pumpkin. The mix is made from a variety of winter squash (think butternut, Golden Delicious, Hubbard, and more). Libby’s, the brand that produces about 85% of the country’s canned “pumpkin” filling, has actually developed a certain variety of squash that they grow, package, and distribute to supermarkets across the country — all the while fooling innocent, trusting consumers into believing they’re eating a pumpkin ... As it turns out, pumpkins can be fairly stringy and watery; certain varieties of winter squash make a richer, sweeter puree that works way better for packing the now-ambiguous flavor we all love into our favorite fall dishes.

Additionally, the USDA is fairly lenient with gourd terminology in general, which is why it’s perfectly legal to label a food product as “pumpkin” when, in reality, it’s made from a different variety of squash. So it’s all good now that there’s an explanation, right? NO. It’s not.

Although many readers expressed surprise and horror at the concept, the claim was not new. At least two food blogs spilled the beans (or seeds) in 2014, alerting the world to the fact that the pumpkins used in canned pumpkin were of a type largely unsuitable for jack o'lantern carving. Earlier versions of the claim were less reliant on shock factor and included more detail about the purported makeup of canned pumpkin:

And [Dickinson pumpkin] is a variety of Cucurbita moschata, the sole ingredient in most canned “pumpkin” sold in the U.S. The Dickinson variety of squash was developed specifically by Libby’s, the brand responsible for selling about 85 percent of canned pumpkin pie filling sold in the U.S. As you can see, it bears a lot more resemblance to a butternut squash than anything you’d think to carve a face on ... So if you’re a longtime fan of pumpkin pie, chances are you’ve actually been enjoying something more along the lines of butternut squash pie. Seasoned with “squash spices.” Which coffee chains use to make seasonally appropriate “squash spice lattes.” Yes, squash spice lattes.

According to botanists, however, asserting a clear distinction between "pumpkin" and "squash" is difficult because there is no strict botanical definition for pumpkins. Semantically, pumpkins are a type of squash, and the Dickinson cultivar is listed as a pumpkin, as are other c. moschata varietals:

Names differ throughout the world, but in the United States, any round, orange squash used for pies or jack-o-lanterns is likely to be called a pumpkin.  But the term “pumpkin” really has no botanical meaning, as they are actually all squash.

Naturally, the thought of a butternut squash (typically dressed in a savory manner, though not always) in pie or cheesecake is perceived as less appetizing, and the consternation on social media has been more immediate than it was in 2014 when the matter was approached in a less alarmist fashion. In November 2013, High Plains Public Radio did a profile — not an exposé — on Libby's, Dickinson pumpkins, and the aesthetic factor, and they noted that the information they collected no secret:

The variety [farmer John] Ackerman grows for Libby’s, called the Libby’s Select, is closer to a butternut squash than it is a jack o’ lantern. It isn’t harvested for its looks. Its off-white skin is peeled away and the thick orange flesh inside is cut out, steamed and strained before it is put in a can at the local Libby’s processing plant.

“We tell our schoolchildren it may not be as pretty as some of the other pumpkins, but it makes a great pumpkin pie,” Ackerman says of the Libby’s Select.

Although that article compared Dickinson cultivars to butternut squash, it included a photograph a field of the former looking like pumpkins — perhaps not doorstep-worthy pumpkins, but recognizable pumpkins nonetheless: The label for Libby's canned pumpkin also naturally lists "pumpkin" and not "squash" as an ingredient: Agricultural trade groups have definitively deemed the C. Moschata cultivars as "pumpkin" and not "squash":

Pumpkins belong to the Cucurbita genus, along with cucumbers, melons, and squash. However, the term “pumpkin” refers to members of four different species, C. moschata, C. mixta, C. pep, and C. maxima.

A UK-based source for agricultural information noted that the extensive range of varietals under the "pumpkin" umbrella are "also sometimes known" by either description (i.e., pumpkin or squash):

Cucurbita pepo has been cultivated for its edible fruits for thousands of years and remains a crop plant of great economic importance today. An extensive range of cultivars is available, including those grown to produce fruits for Halloween lanterns and pumpkin pies, courgettes (zucchinis), marrows, many types of squashes and ornamental gourds. It is important to note that the common names pumpkin and squash are used for more than one species of plant. For example the fruits of some cultivated forms of Cucurbita maxima, C. moschata and C. argyrosperma are also sometimes known as pumpkins and squashes.

Some critics have cited lax Food and Drug Administration (FDA) standards as the culprit behind the purported pumpkin perfidy, but those guidelines (in effect since 1938) don't appear to be predicated on squash subterfuge. Nor does the existence of a rule permitting the use of the terms squash and pumpkin interchangeably constitute evidence that the primary brand of canned pumpkin engages in a misleading practice:

Since 1938, we have consistently advised canners that we would not initiate regulatory action solely because of their using the designation "pumpkin" or "canned pumpkin" on labels for articles prepared from golden-fleshed, sweet squash, or mixtures of such squash with field pumpkins. In the absence of any evidence that this designation misleads or deceives consumers we see no reason to change this policy.

Predictably, Libby's (the primary manufacturer of canned pumpkin, and a Nestle brand product) was besieged by legions of concerned holiday bakers on social media shortly after the article referenced above began circulating. Many consumers asked if their canned pumpkin was a blend of other squashes, to which a representative for Libby's answered:

Pumpkin is a variety of squash belonging to the "Cucurbitaceae", or gourd family which also includes melons and cucumbers. Libby's proudly uses 100% pumpkin in our Libby's solid pack pumpkin. We do not use Hubbard squash, or other types of squash. In fact, Libby's uses a specific cultivar of pumpkin called Dickinson.

The "Libby's Select" strain of Dickinson is our own, developed over decades by our own agricultural people. Dickinson pumpkins are considered "the king" of eating pumpkins.

Nestle maintains that Libby's is responsible for the manufacture and sale of 85 percent of pumpkin worldwide (as high as 90 percent in the U.S.), and their use of a proprietary Dickinson cultivar was well-established prior to the Great Pumpkin Panic of 2016. Although pumpkins and squash are very closely related, the company denied that they ever used a "blend" of various squashes in their popular canned pumpkin.

It is true that Dickinson pumpkins are less photogenic than common decorative varieties, but it is false that the bulk of canned pumpkin is a blend of winter squashes such as butternut. It is also true that the FDA allows for sweet squash blends to be sold under the label of "pumpkin," but that doesn't appear to be the case with Libby's, who use Dickinson pumpkins.

In short, pumpkin pie aficionados can rest assured their canned pumpkin of choice is indeed a pumpkin and not a blend of other squashes masquerading as such — although perhaps not a type that could double as a carving pumpkin.