Was the Canadian Flag Displayed Across Niagara Falls?

A patriotic display could be seen at Niagara Falls on Canada Day 2019, but it wasn't THAT elaborate. 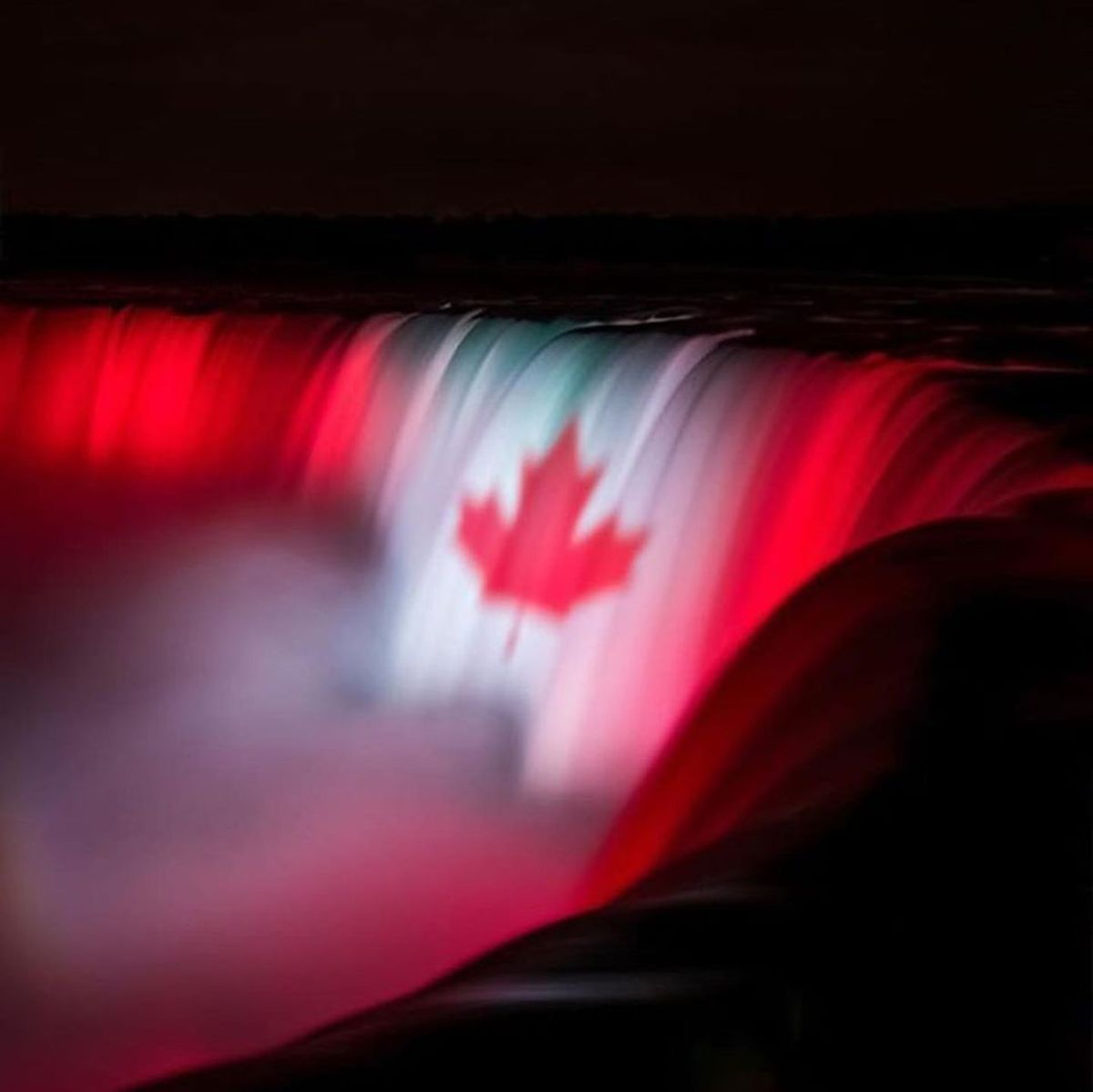 A photograph supposedly showing a light display across Niagara Falls featuring the Canadian flag was widely shared on social media on Canada Day, July 1, in 2019: This is not a genuine photograph of Niagara Falls on Canada Day. While the Falls sometimes are illuminated in a variety of colors at night, these displays typically consist of solid bands of colors (not shapes such as the maple leaf shown above).

The Niagara Parks Commission provided some details about the real "Falls Illumination" events on their website:

Every evening beginning at dusk, Niagara Falls is transformed into an incredible, multi-coloured water and light masterpiece.

Special lights are housed in the Illumination Tower, next to Queen Victoria Place; on the roof of Table Rock Centre, at the brink of the Horseshoe Falls; and deep in the Niagara Gorge, across from the American Falls. Together, these lights work to create a breathtaking view not to be missed. The falls are also lit in custom colours for short durations to mark significant dates in support of charitable causes. Special colour illuminations are provided courtesy of The Niagara Falls Illumination Board.

In addition to these nightly light shows, the Falls are occasionally lit with specific colors in honor of special events and holidays. When the Toronto Raptors won the NBA championship, for instance, the waterfall was lit red:

On Canada Day, the lights illuminate Niagara Falls in red and white, the colors of the Canadian flag — minus any maple leaf.

The above-displayed image was created by digitally editing a photograph of the Niagara Falls' Canada Day display that was posted to Reddit in 2018. Here's a look at the edited image (left) and the original image (right): Chris Giles, travel media relations and content coordinator for Niagara Parks, confirmed that the image to the left "has been photoshopped."

Angela Berti, a spokesperson with New York State Parks, told us: "There was NO projection of the Canadian flag on the Falls. That is not a practice that is allowed. The Falls are lit each night, however, by the Niagara Falls Illumination Board, a binational organization that oversees the lighting of the Falls. We work hard to keep the Falls as natural as possible."

This wasn't the only digitally altered picture of the Canadian flag on Niagara Falls to circulate on Canada Day 2019. This is also such a picture: This picture was originally submitted to Worth1000.com (now DesignCrowd.com) in 2005 for the "Nationalism 2" Photoshop contest:

The rules of the contest explained: "Just look in the crowd at any international sporting event. National pride is bursting at the seams. Body paint galore. Now we want you to take this idea a little farther. Place national symbols/flags on any random object. Don't just place a flag marking on someone's face. How boring, how unoriginal. You can do better than that."