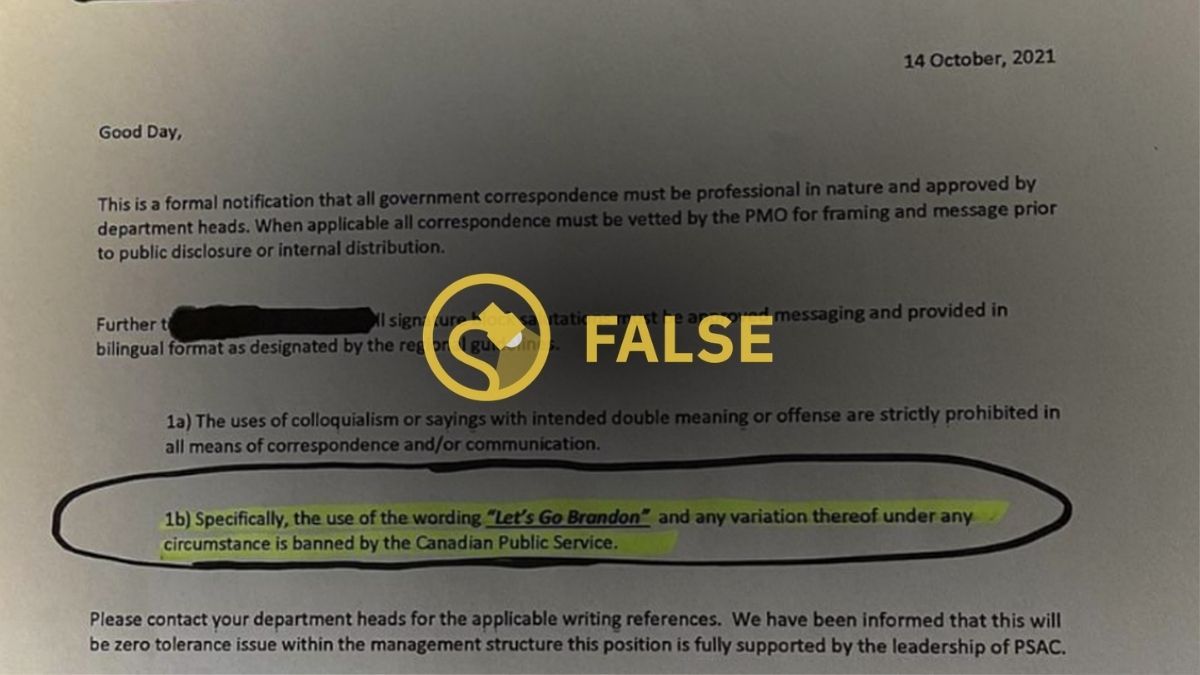 In October 2021, an image supposedly showing a memo from Canadian government agency Shared Services Canada, forbid employees from using the phrase "Let's Go Brandon," a euphemism for a lewd anti-Biden chant, was circulated on social media: This is not an official document from the Canadian government forbidding the use of the phrase "Let's Go Brandon."

A Shared Services spokesperson told the National Post: “We can confirm this message was not issued by Shared Services Canada and it does not reflect departmental policy."

The phrase "Let's go Brandon" was popularized in the fall of 2021 as a sort of euphemism for the phrase "F*ck Joe Biden." This started in early October 2021 when NBC Sports reporter Kelli Stavast interviewed NASCAR driver Brandon Brown following his victory at the Talladega Superspeedway. As Stavast attempted to talk to Brown about his victory, the crowd started chanting "F*** Joe Biden." Stavast noted that the noise of the crowd was making it difficult to talk and said that it appeared the crowd was chanting, "Let's Go Brandon."

Since then, the phrase "let's go Brandon" has been widely used on social media, been put on T-shirts, popped up at anti-vaccination protests and Trump rallies, and has even led to a hit song on the iTunes chart.

An anti-President Biden rap song inspired by the viral "Let's go Brandon!" trend is now sitting at the top of the iTunes hip-hop chart.

The song, performed by rapper Loza Alexander and entitled "Let's Go Brandon," first went viral on TikTok before making a fast rise up the iTunes hip-hop chart to clinch the number one spot.

While this chant has become popular among Trump supporters and some conservatives in the United States, it's unclear if it has achieved mass appeal in other countries. This seems unlikely as a recent poll found that the vast majority of Canadians say they would vote for Biden over Trump.