An anti-immigrant image makes a host of false accusations about benefits available to Muslim refugees in Canada. 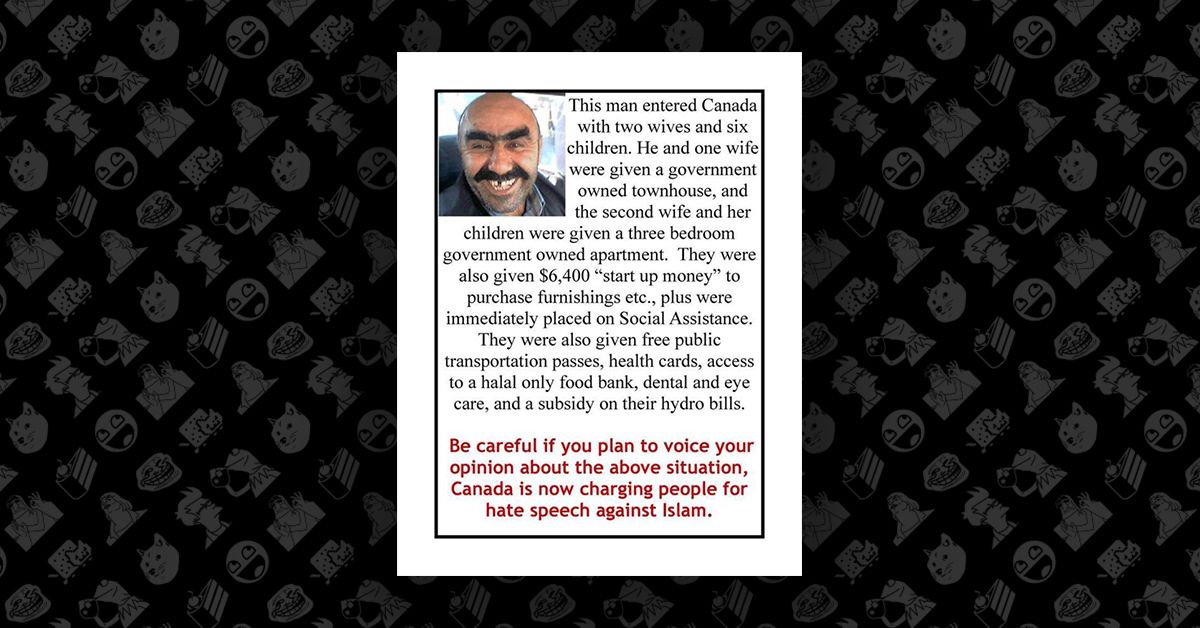 Claim:
Canadian immigrants with "two wives" receive a host of government benefits upon their their arrival.
Rating:

In January 2017, an image macro circulated via Facebook taking aim at Muslim refugees in Canada by misstating the nature of several benefits available to them. The misleading nature of the macro begins with suggestion that a smiling gentleman depicted in the image actually entered Canada with "two wives and six children," even though this photograph has actually been used by various "funny pictures" web sites for several years.

The "two wives" claim appears to play off of reports of Muslim male immigrants secretly practicing polygamy, even though the practice of having more than one spouse at a time is illegal in Canada. The Supreme Court of British Columbia upheld that law in a November 2011 ruling involving a non-Muslim polygamous sect.

According to Immigration, Refugees and Citizenship Canada, a federal agency that helps both immigrants and refugees, that law is taken into account during the immigration process.

The agency told us:

Polygamy is illegal in Canada, and therefore multiple marriages are not recognized under Canada’s immigration laws. This means that a permanent resident or Canadian citizen can only immigrate with one spouse after having dissolved other marriages to “convert” their polygamous marriage to a monogamous one.

Immigration, Refugees and Citizenship Canada (IRCC) has advised the [United Nations Refugee Agency] that individuals in a polygamous marriage should not be referred for resettlement to Canada. As well, IRCC officers assess privately sponsored refugee cases against Canada’s immigration laws, including monogamous marriage requirements. Therefore, individuals practising polygamy would be inadmissible to Canada.

The reference to "privately sponsored refugees" concerns a separate program, though Syrian and Iraqi refugees are currently exempt from having to show documentation recognizing them as such. Regarding the claim of a "government-owned townhouse" and "a three bedroom government-owned apartment," the agency said:

The government does not own apartments or townhouses which are then given to resettled refugees.

Immigration officials also provided examples of regional average payments for refugees and their families distributed through the Resettlement Assistance Program (RAP), which can be seen below:

Resettlement support normally includes a one-time start-up payment to assist the refugees in establishing a household in Canada, as well as monthly income support to help them get through their first year in Canada. Monthly support is provided to cover the costs of food and incidentals, shelter and transportation. This amount varies depending on the family size and is guided by the prevailing provincial social assistance rates in the province where the refugee(s) reside.

Income support for most resettled refugees is provided for their first year in Canada by the federal government, private sponsors or a mix of both. When income support ends, it is normal for some refugees in need to transition to provincial or territorial social assistance support.

The program also provides referrals to agencies in the country's various provinces who can help them acclimate themselves after emigrating. According to the agency:

Among other things, these service provider organizations help newcomers to find and retain employment, including referrals to assess foreign credentials. They also offer free language assessment and training to help newcomers contribute to the economy. Support Services, including child care, transportation assistance, translation, interpretation, crisis counselling and provisions for disabilities, are offered across the Settlement program to enable access to direct settlement services.

The reference to immigrants' being given "health cards" is a possible allusion to the Interim Federal Health Program (IFHP) which provides "limited, temporary coverage of health-care benefits" to refugees until they qualify for the country's public healthcare system, which is administered through provincial and territorial governments and not funded by the federal government.

As noted above, the benefits payments distributed to refugees do cover the cost of buying foods, but the macro's statement regarding "access to a halal-only food bank" misleadingly presents that as another government service. In reality, those services are often operated by private organizations such as the Canadian Muslim Women's Institute, or CMWI. We were unable to get in touch with CMWI for more information prior to publication, but the group's president, Yasmin Ali, explained the circumstances facing many of the people they help in a September 2016 interview:

With the kids going to school and needing clothing and ... school supplies, the extra food that they can get through Winnipeg Harvest is a good help to free up some money so they can actually access other necessities, pay other bills and get other things that they need.

The macro closes by stating that "voicing your opinion" could open people up to hate speech charges. In reality, the country's anti-hate laws do not address just general "opinions," but hate speech:

Under section 318, everyone who advocates or promotes genocide is guilty of an offence punishable by up to five years’ imprisonment. The term “genocide” is defined to mean killing members of an identifiable group or deliberately inflicting on an identifiable group conditions of life calculated to bring about the group’s physical destruction. Section 318(4) of the Criminal Code defines an “identifiable group” as any section of the public distinguished by colour, race, religion, ethnic origin or sexual orientation. No prosecution under this provision can be undertaken without the consent of the provincial Attorney General.

Under section 319(1) of the Criminal Code, everyone who, by communicating statements in a public place, incites hatred against any identifiable group where such incitement is likely to lead to a breach of the peace is guilty of an indictable offence punishable by up to two years’ imprisonment, or of a summary conviction offence.

Section 319(2) makes it an offence to communicate, except in private conversation, statements that wilfully promote hatred against an identifiable group. Section 319(7) defines “communicating” to include communicating by telephone, broadcasting or other audible or visible means. “Public place” is defined to include any place to which the public has access as of right or by invitation, express or implied. “Statements” include words spoken or written or recorded electronically, electromagnetically or otherwise, and also include gestures, signs or other visible representations.

The ongoing conflict in Syria has triggered the worst humanitarian crisis in the world today. The Government of Canada remains committed to upholding its humanitarian tradition to resettle refugees and offer protection to those in need. Canada has a long and proud tradition of providing protection to those who need it the most by providing refuge to the world’s most vulnerable people and has welcomed generations of newcomers who have helped us build our society, culture and economy in long lasting and enduring ways.

Immigration from all streams provides significant benefits to Canada and to the immigrants who have come here to build their new lives. When we come together to welcome and integrate newcomers, it strengthens our communities and contributes to our country’s success—it helps build our society, culture and economy in long lasting and enduring ways.

The agency also noted that — according to preliminary findings — 53 percent of privately-sponsored adult refugees living outside of Quebec by 1 March 2016 had already found employment. IRCC said the employment rate for adult refugees taking part in government assistance programs outside of the same province was around 10 percent, which it attributed to "substantially lower language skills."