Did Canada 'Ban Beyonce' Over Her Super Bowl Performance?

Singer Beyonce has not been banned from entering or performing in Canada based on her 2016 Super Bowl halftime performance. 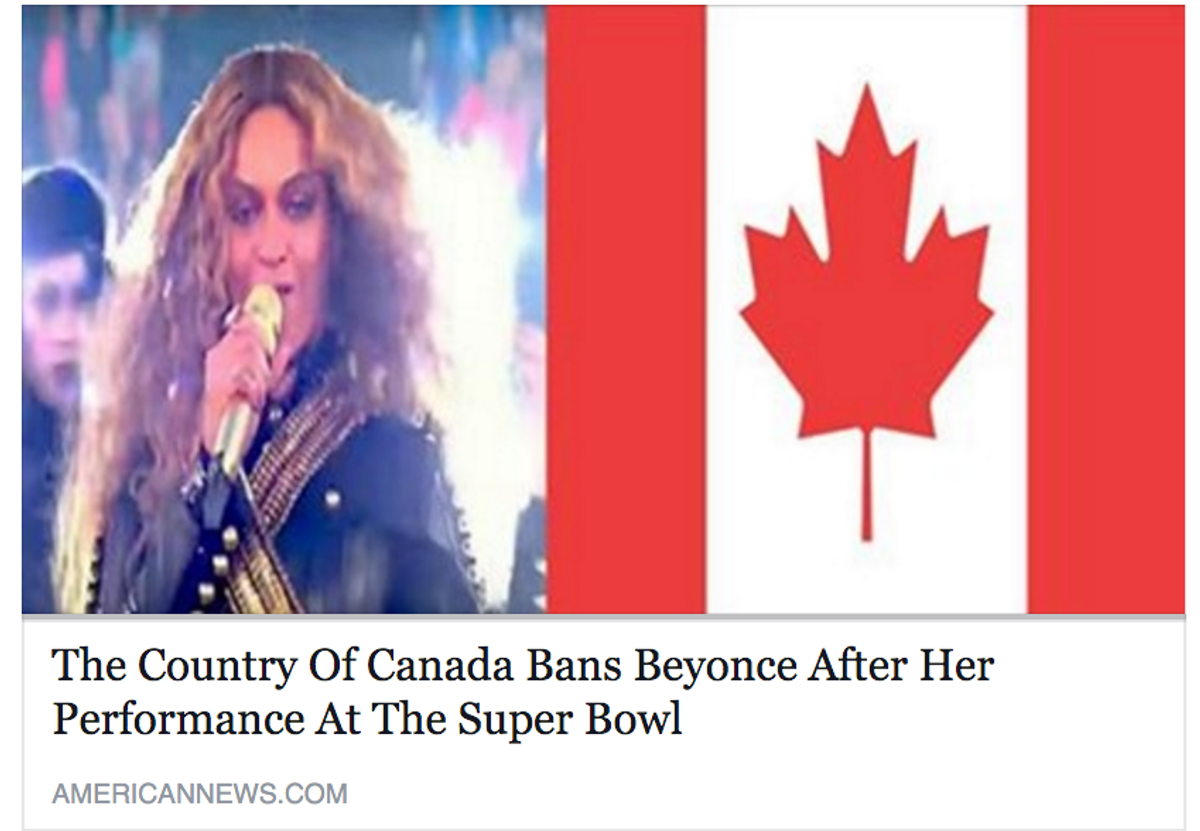 Claim:
Beyonce has not been banned from performing in Canada based on her 2016 Super Bowl halftime performance.
Rating:

On 14 February 2016, the disreputable web site American News published an article reporting that popular singer Beyonce had been banned from performing in Canada due to her supposed use of her February 2016 Super Bowl halftime appearance "as a platform to focus on black power": The article was misleadingly tagged with the clickbait headline "Canada Does Not Allow Beyonce to Perform in Their Country," as, the page's content didn't match the claims of its title. The text simply reported that a single Canadian official had suggested banning Beyonce from performing in that country might be a possible course of action:

As you've likely seen and heard by now, the star used her performance as a platform to focus on black power, including references to the Black Panthers and Malcolm X. Concerned citizens were immediately furious with the references, accusing Beyonce for "perpetuating racial tension" by celebrating those who encouraged racial violence.

Now, it's becoming abundantly clear that other countries were as put off by the performance as the United States was. One Toronto official has even suggested that Canada prevent Beyonce from performing in the country if she truly does support the New Black Panthers.

A 13 February 2016 article by America's Freedom Fighters also appeared under a clickbait headline stating that "Canada Does What NOBODY Will After Seeing Beyonce's Racist Show," but that article also walked the claim back in its text.

Both misleading articles linked to an 8 February 2016 Toronto Sun item whose thirteenth paragraph referenced Canadian reactions to the performance. and noted that Beyonce had upcoming shows scheduled in Canada:

But Beyonce has announced her Formation World Tour is coming to the Rogers Centre in Toronto May 25 and to Commonwealth Stadium in Edmonton on May 20.

"Perhaps Immigration Minister John McCallum should have her investigated first?" wondered the Ward 39 councillor and former federal MP. "If someone wore bullets and supported (a radical group) here, they would not be welcomed in the United States — that's for sure."

He said he wouldn't ban Beyonce based on this performance but if a probe found she or her dancers financially support the New Black Panthers, "she or some of them could be found not eligible to enter the country as others in the past have faced."

Karygiannis called the whole approach "disturbing" at a time when "we should not be promoting gun culture or anti-police sentiments."

As that brief portion of the article relayed, a single Toronto councilman merely suggested that if Beyonce or any of her troupe were proved to have provided financial support to any radical groups, they might be denied entry to Canada on that basis. That's a far cry from the stated claim that Canada has already "banned" Beyonce from performing there based on nothing more than the tenor of her brief Super Bowl appearance.