Can Water from Plastic Bottles Be Toxic?

Does reusing, freezing, or warming plastic water bottles cause them to break down into dioxins or carcinogenic compounds? 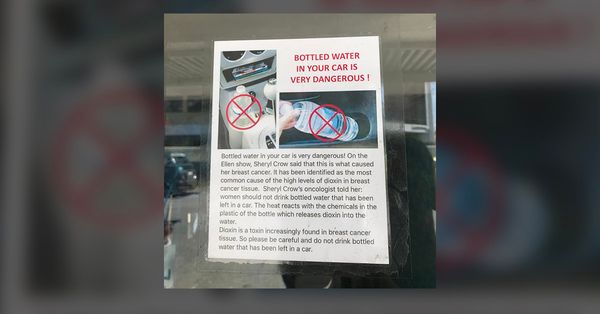 Claim:
Reusing, freezing, or warming plastic water bottles will cause them to break down into carcinogenic compounds or release dioxins.
Rating:

Whether heating some types of plastic bottles could increase the leaching of harmful phthalates into the fluids they contain.

Sorting out the various claims made about potential health issues associated with plastic water bottles is a difficult process, both because so many different claims about them are circulated and because the generic term "plastic bottle" can in fact refer to any one of several different types of bottles with distinctly different chemical properties.

No water bottles in freezer. A dioxin chemical causes cancer, especially breast cancer. Dioxins are highly poisonous to the cells of our bodies. Don't freeze your plastic bottles with water in them as this releases dioxins from the plastic.

[Collected via e-mail, 2004]
Many are unaware of poisoning caused by re-using plastic bottles. Some of you may be in the habit of using and re-using your disposable mineral water bottles (eg. Evian, Aqua, Ice Mountain, Vita, etc), keeping them in your car or at work. Not a good idea. In a nutshell, the plastic (called polyethylene terephthalate or PET) used in these bottles contains a potentially carcinogenic element (something called diethylhydroxylamine or DEHA).

The bottles are safe for one-time use only; if you must keep them longer, it should be or no more than a few days, a week max, and keep them away from heat as well. Repeated washing and rinsing can cause the plastic to break down and the carcinogens (cancer-causing chemical agents) can leach into the water that YOU are drinking. Better to invest in water bottles that are really meant for multiple uses. This is not something we should be scrimping on. Those of you with family — please advise them, especially for their children's sake.

Do Not Drink Water Bottles Left in the Car

My husband has a friend whose mother recently got diagnosed with breast cancer. The doctor told her women should not drink bottled water that has been left in a car. The doctor said that the heat and the plastic of the bottle have certain chemicals that can lead to breast cancer. So please be careful and do not drink that water bottle that has been left in a car and pass this on to all the women in your life.

Water, soda, and juice are typically sold in bottles made from polyethylene terephthalate, also known as PET or PETE. These containers are intended to be disposable, single-use bottles, although many consumers wash them and re-use them to hold drinking water or other beverages. Some of the example items reproduced above claim that freezing or re-using PET bottles releases unsafe levels of carcinogens such as "dioxins" or the plastics additive DEHA (diethylhydroxylamine) into whatever liquids they may contain. However, according to the American Chemistry Council, such claims are inaccurate on two counts: DEHA is not used in the manufacture of PET bottles (nor is it created through the breakdown of such bottles), and DEHA is not classified as a human carcinogen:

DEHA is neither regulated nor classified as a human carcinogen by the U.S. Occupational Safety & Health Administration, the National Toxicology Program or the International Agency for Research on Cancer, the leading authorities on carcinogenic substances.

In 1991, on the basis of very limited data, the U.S. Environmental Protection Agency classified DEHA as a "possible human carcinogen." However, in 1995, EPA again evaluated the science and concluded that " ... overall, the evidence is too limited to establish that DEHA is likely to cause cancer."

Further, DEHA is not inherent in PET as a raw material, byproduct or decomposition product.

Moreover, DEHA has been cleared by FDA for food-contact applications and would not pose a health risk even if it were present.

Finally, in June 2003, the Swiss Federal Laboratories for Materials Testing and Research conducted a scientific study of migration in new and reused plastic water bottles from three countries. The Swiss study did not find DEHA at concentrations significantly above the background levels detected in distilled water, indicating DEHA was unlikely to have migrated from the bottles. The study concluded that the levels of DEHA were distinctly below the World Health Organization guidelines for safe drinking water.

In fact, DEHA is not inherent in the plastic used to make these bottles, and even if it was the U.S. Environmental Protection Agency (EPA) says DEHA "cannot reasonably be anticipated to cause cancer, teratogenic effects, immunotoxicity, neurotoxicity, gene mutations, liver, kidney, reproductive, or developmental toxicity or other serious or irreversible chronic health effects." Meanwhile, the International Agency for Research on Cancer (IARC), says diethylhexyl adipate "is not classifiable as to its carcinogenicity to humans."

As for the notion that freezing water in plastic bottles releases dioxin, the American Chemical Council asserted:

There simply is no scientific basis to support the claim that PET bottles will release dioxin when frozen. Dioxins are a family of chemical compounds that are produced by combustion at extremely high temperatures. They can only be formed at temperatures well above 700 degrees Fahrenheit; they cannot be formed at room temperature or in freezing temperatures. Moreover, there is no reasonable scientific basis for expecting dioxins to be present in plastic food or beverage containers in the first place.

Q: What do you make of this recent email warning that claims dioxins can be released by freezing water in plastic bottles?

A: This is an urban legend. There are no dioxins in plastics. In addition, freezing actually works against the release of chemicals. Chemicals do not diffuse as readily in cold temperatures, which would limit chemical release if there were dioxins in plastic, and we don't think there are.

Dr. Halden did note that drinking water from plastic bottles that had been exposed to high temperatures could be problematic, though:

There is another group of chemicals, called phthalates that are sometimes added to plastics to make them flexible and less brittle. Phthalates are environmental contaminants that can exhibit hormone-like behavior by acting as endocrine disruptors in humans and animals. If you heat up plastics, you could increase the leaching of phthalates from the containers into water and food.

Another common type of plastic bottle is made with bisphenol A, also known as BPA. These products are typically rigid plastic bottles intended for multiple re-use, such as baby bottles or water bottles carried by cyclists. Concerns about tests that may link BPA ingestion with cancer and reproductive damage in some animals and the possibility that BPA could leach out of plastic bottles and into the liquids they contain has led to bans on the use of BPA in plastic products intended for children (such as baby bottles), and has prompted some consumers to seek out non-BPA alternatives.