A pair of articles about the legality of rape in police custody confused social media readers. 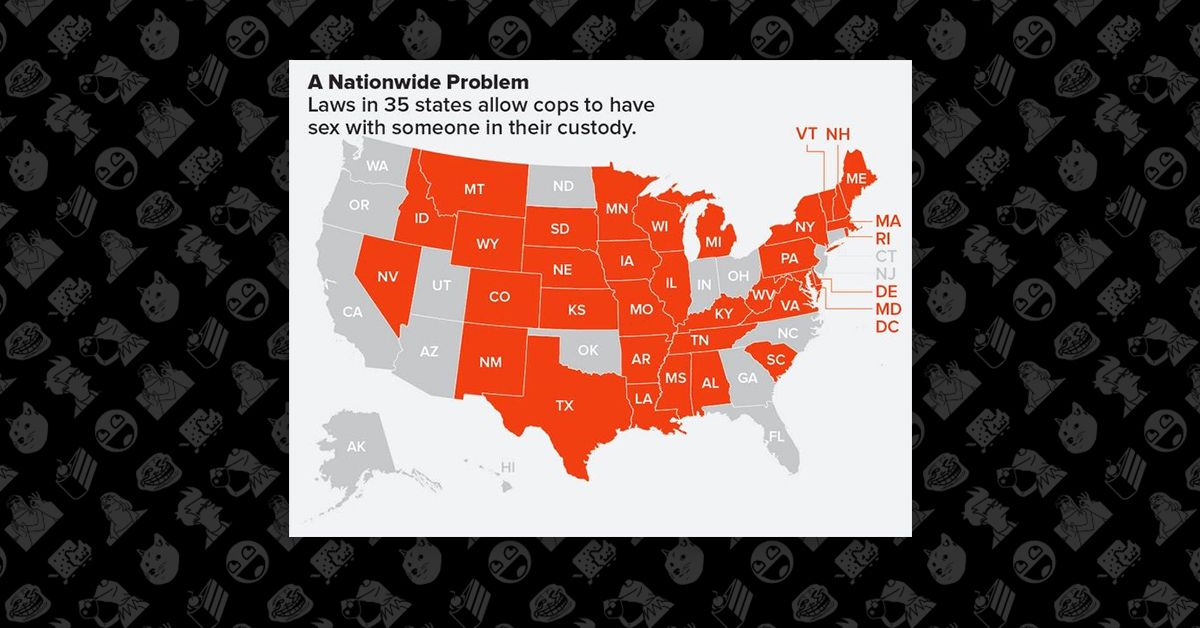 Claim:
In 35 states, it's legal for police officers to have sex with unconsenting detainees.
Rating:

In 35 states, no laws expressly define all sex between police officers and detainees as non-consensual.

However, rape by police officers is illegal in all 50 states.

The articles stemmed from the case of a New York City teenager who had accused two officers of handcuffing her and taking turns raping her in a police van. While some readers, like the above, read the coverage of that case and claimed it was legal for police to sexually assault individuals in custody, the truth behind that claim was that consensual sex between an on-duty officer and a detainee was not explicitly illegal in 35 states.

Such statements stemmed from poor readings of a 7 February 2018 story published by BuzzFeed News. That report began with an account of the alleged assault of a teenager named Anna from Brooklyn:

Inside [a van], Anna said the detectives took turns raping her in the backseat as the van cruised the dark streets and as she sat handcuffed, crying and repeatedly telling them “No.” Between assaults, she said, the van pulled over so the cops could switch drivers. Less than an hour later, a few minutes’ drive from where it all began, the detectives dropped Anna off on the side of the road, a quarter-mile from a police station, surveillance footage shows. She stood on the sidewalk, her arms wrapped around her chest, looking up and down the dimly lit street and pacing slowly before borrowing a cell phone from a passerby to call a friend.

The piece subsequently described what it termed a legal "loophole":

But Anna didn’t know that in New York, there is no law specifically stating that it is illegal for police officers or sheriff’s deputies in the field to have sex with someone in their custody. It is one of 35 states where armed law enforcement officers can evade sexual assault charges by claiming that such an encounter — from groping to intercourse — was consensual.

BuzzFeed’s spotlight on Anna’s case was meant to underscore their finding that in 35 states, no laws existed to expressly define all sex between police officers and detainees as non-consensual by its nature alone. Therefore, a detainee might feel obliged to “consent” to sex in order to avoid being arrested or detained, even on false charges.

A person in police custody can’t give genuine consent, free from coercion. Not to armed police officers who have the power to arrest them if they say no.

But here’s the kicker: Buzzfeed’s investigation found that in 35 states, it’s legal for police to have sex with people in their custody.

Police officers are no different — if you’re in the back of a cop’s car, you are at their mercy. The police shouldn’t be able to exploit that power differential to force themselves on vulnerable women yet, in most states in America, they can do so and face no legal consequences.

A map appended to the BuzzFeed piece displayed wording that made a de facto reality (because of a lack of law banning it) seem like a de jure legal standing holding that police have explicit permission to have intercourse with people in custody: But the context of the article made clearer that rape by police was illegal in all 50 states, and that Anna's alleged attackers were arrested, according to BuzzFeed:

The cops made no arrest [when Anna was detained], issued no citation, filed no paperwork about the stop. Hours later, Anna and her mother went to a hospital, where Anna told nurses two detectives had sexually assaulted her, according to hospital records. Semen collected in Anna’s rape kit matched the DNA of detectives Eddie Martins, 37, and Richard Hall, 33, of the Brooklyn South narcotics unit. Both have since resigned from the force and been charged with rape.

The context often missed in the spread of both articles was that laws exist in several states classifying any sex as non-consensual if one participant is on-duty in a position of power (such as a corrections officer or social worker). (In New York State a law of a similar nature did not include "police officers" or "detainees" in its language.)

BuzzFeed further asserted that of 158 law enforcement officers charged since 2006 with sexual assault, sexual battery, or unlawful sexual contact with a detainee, "at least 26 have been acquitted or had charges dropped based on the consent defense."

In short, the original item published by BuzzFeed pertained not to laws "allowing" police officers to rape with impunity, but an absence of laws that explicitly defined any sexual contact between a detainee and officer as non-consensual in many states.

RAINN (The Criminal Justice System: Statistics).   "The Vast Majority of Perpetrators Will Not Go to Jail or Prison."     Accessed 12 February 2018.