A felon can regain the right to vote via a pardon, but most felons regain that right upon completion of their sentences. Such decisions vary from state to state. 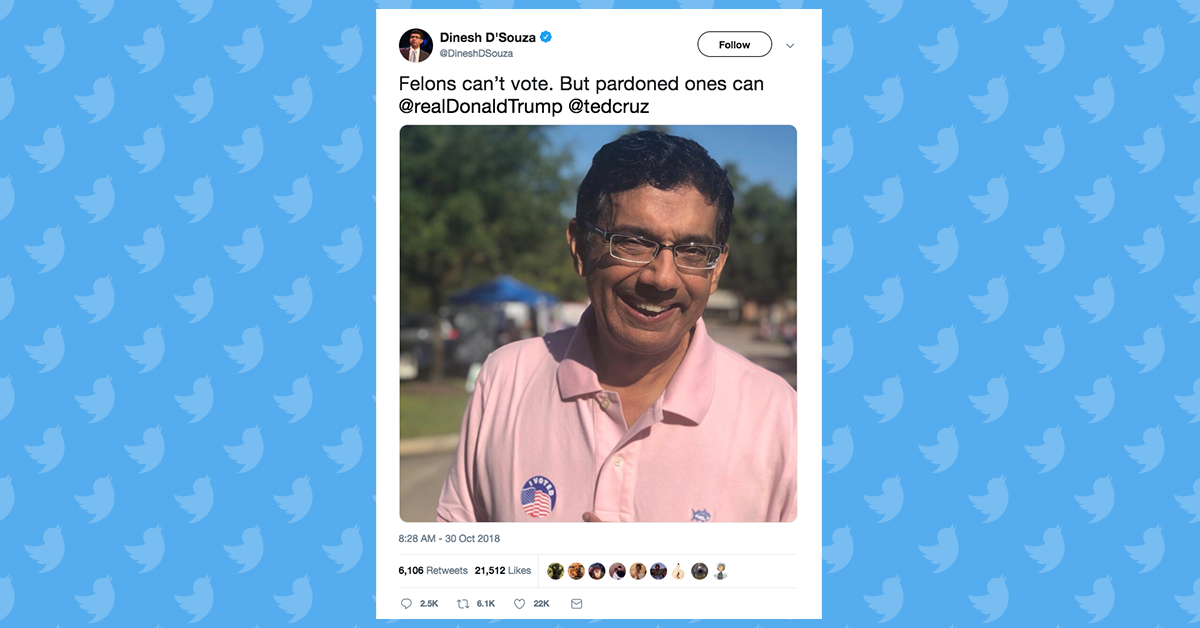 The power for states to deny voting rights to persons convicted of crimes has been inferred as constitutional based on section two of the Fourteenth Amendment to the U.S. Constitution, which states (emphasis ours):

[W]hen the right to vote at any election for the choice of electors for President and Vice President of the United States, Representatives in Congress, the Executive and Judicial officers of a State, or the members of the Legislature thereof, is denied to any of the male inhabitants of such State, being twenty-one years of age, and citizens of the United States, or in any way abridged, except for participation in rebellion, or other crime, the basis of representation therein shall be reduced in the proportion which the number of such male citizens shall bear to the whole number of male citizens twenty-one years of age in such State.

The inference that it would be constitutional for a state to disenfranchise an individual “for participation in rebellion, or other crime” was affirmed most recently in the 1974 Supreme Court case Richardson v. Ramirez. As a result, the power to take away and restore voting rights on the basis of criminal history belongs to the individual states and varies significantly from state to state, as explicated by the National Conference of State Legislatures:

In Maine and Vermont, felons never lose their right to vote, even while they are incarcerated. In 14 states and the District of Columbia, felons lose their voting rights only while incarcerated, and receive automatic restoration upon release.

In 21 states, felons lose their voting rights during incarceration, and for a period of time after, typically while on parole and/or probation. Voting rights are automatically restored after this time period. Former felons may also have to pay any outstanding fines, fees or restitution before their rights are restored as well.

In 13 states felons lose their voting rights indefinitely for some crimes, or require a governor’s pardon in order for voting rights to be restored, or face an additional waiting period after completion of sentence (including parole and probation) before voting rights can be restored.

A person convicted of a felony who resided in one of the states that maintain strict felony disenfranchisement laws (such as Florida) could be barred from regaining voting rights indefinitely.

Felons can’t vote. But pardoned ones can @realDonaldTrump @tedcruz pic.twitter.com/5G7SPelalw

D’Souza pled guilty in September 2014 to federal campaign finance law violations and was sentenced to five years of probation, eight months living under supervision in a “community confinement center” in San Diego, and a $30,000 fine. In May 2018, President Trump pardoned D’Souza based on his view that D’Souza had been treated “unfairly.”

According to this timeline, D’Souza was still serving his sentence at the time of the pardon. The question at hand, then, is did D’Souza ever actually lose his voting rights in the first place? As explained above, that would depend on where he was registered to vote. According to Vanity Fair, D’Souza has maintained residences in both California and New York.

California requires “the Legislature to provide for the disqualification of electors while mentally incompetent or imprisoned or on parole for the conviction of a felony.” D’Souza was neither imprisoned nor released on parole, so he presumably would not have been disenfranchised by California as a result of his probationary status.

In New York, the state bars persons “in prison or on parole for a felony conviction” from voting in elections, but it does not bar persons on probation for felony convictions. In fact, Governor Andrew Cuomo signed an executive order in April 2018 granting parolees the right to vote (although that order may still be challenged in court). If D’Souza had been planning on voting in New York, he likely would have been able to do so even if President Trump had not pardoned him.

The shoutout to Senator Ted Cruz in D’Souza's tweet was likely a reference to Cruz's role in suggesting a pardon of D’Souza to President Trump. However, if D’Souza were claiming to be a voter in Texas -- where felons are barred from voting until their sentences (including probation) are fully served -- or in one of the other states where all felons are disenfranchised for the entirety of their sentences and probationary periods, he could be correct in suggesting his rights were restored via President Trump’s pardon.

Update: On 6 November 2018, the State of Florida approved Amendment 4, which restored voting rights to felons (excluding cases of murder or felony sex crimes) who have completed their sentences, as reported by Vox:

Based on the Sentencing Project’s 2016 estimates, this benefits more than a million people. The organization estimated in 2016 that nearly 1.5 million people in Florida have completed felony sentences but can’t vote — about 9.2 percent of the voting-age population in Florida. The total, though, includes some people convicted of murder and felony sex offenses, so not every one of those people benefits under Amendment 4.

Update [13 November 2018]: Added information about the passage of Florida Amendment 4.