A California pastor praised the Orlando nightclub shooting, saying that it's a tragedy more "predators" and "pedophiles" didn't die. 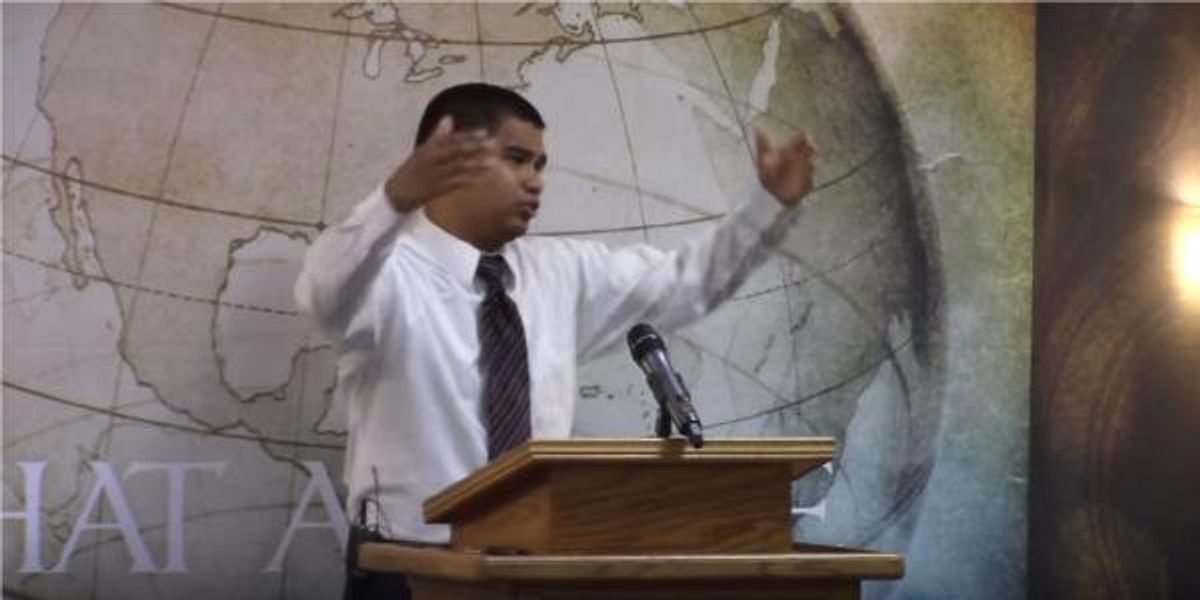 A California pastor responded to the June 2016 shooting at the Pulse nightclub in Orlando, Florida, that killed 49 people and injured over 50 more by praising the gunman and stating that the victims "deserve what they got."

In a sermon delivered the morning after the massacre by Pastor Roger Jimenez of the Verity Baptist Church in Sacramento (and posted to YouTube) Jimenez preached that his congregants should not be grieving for the victims of the shooting at a gay nightclub, equating homosexuals with pedophiles and asserting it was a "tragedy that more of them didn’t die":

"Are you sad that 50 pedophiles were killed today?" Um no. I think that’s great. I think that helps society. I think Orlando, Florida, is a little safer tonight. The tragedy is that more of them didn’t die. The tragedy is I’m kind of upset he didn’t finish the job — because these people are predators. They are abusers. I wish the government would round them all up, put them up against a firing wall, put the firing squad in front of them and blow their brains out."

Jimenez later doubled down on his remarks, asserting again that Orlando had been made safer through the deaths of dozens of innocent nightclub patrons:

"As far as the Bible is concerned, they crossed a line. The sin they performed is worthy of death," he said. "I realize our society doesn't take that, but that's what the bible says. If someone does something that's worthy of death and they end up dying, I'm not gonna mourn them."

"I think [Orlando is] safer now because of these deaths, and the reason I think that is because I believe all of these homosexuals are pedophiles, and the Bible — see our culture and our society puts them in these categories — gay, lesbian, whatever, but that's not found in scripture. And I understand the world does not want to accept that, that's fine. I'm saying as a Christian, the Bible puts people in two categories: normal/natural, unnatural."

As the Sacramento Bee noted, however, the Baptist church with which Jimenez is associated is an independent one (not "Southern Baptist") unaffiliated with any mainstream order of the Baptist faith:

Who is this preacher? Longtime leaders in Sacramento’s faith community say they have never heard of him.

Verity does not appear to be affiliated with any order of the Baptist faith. That means Jimenez can say whatever he wishes without any accountability to a larger religious community.

“It’s like opening up a store and calling it whatever,” said Jerlen Young-Nelson, media director for the National Baptist Convention, America’s oldest and largest African American religious convention, which boasts an estimated membership of 7.5 million people.

“He is a pastor because he calls himself a pastor,” said the Rev. Samuel Rodriguez, president of the National Hispanic Christian Leadership Conference. “A pastor who is not accountable is a pastor who can actually facilitate an atmosphere of spiritual corruption. A lack of oversight serves as fodder for theologically erroneous teaching. Why do we legitimize every Tom, Dick or Harry like this? ... I condemn his entire presentation.”

The empirical research does not show that gay or bisexual men are any more likely than heterosexual men to molest children. This is not to argue that homosexual and bisexual men never molest children, but there is no scientific basis for asserting that they are more likely than heterosexual men to do so. And many child molesters cannot be characterized as having an adult sexual orientation at all; they are fixated on children.

Breton, Marcos.   "Hate Speech from Sacramento Baptist Preacher Is Nothing But Extremism."     The Sacramento Bee.   14 June 2016.