Did Calif. Announce It Will Pay Undocumented Residents COVID-19 Stimulus While Laying Off First Responders? 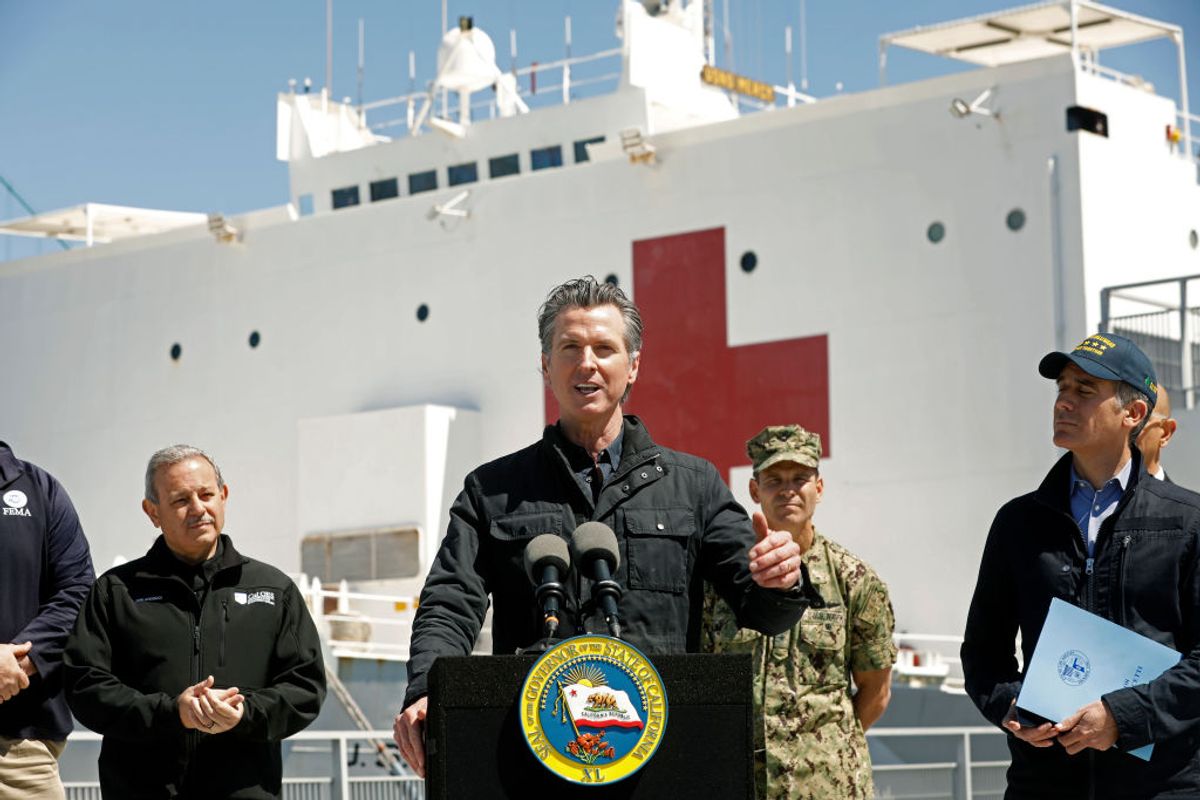 California Gov. Gavin Newsom announced in April 2020 the state would procure $125 million in funds — made up of a mixture of taxpayer dollars and charitable donations — to provide undocumented residents a $500 COVID-19 stimulus payment. More than a month later, he warned of possible COVID-19-related layoffs of first responders.

Newsom didn't announce the stimulus payments for undocumented residents on the same day he warned of looming layoffs resulting from budget shortfalls due to the pandemic. Furthermore, his warning about layoffs was a projection of what could happen at the local level, not an "announcement" of what would happen.

In late May 2020, social media users shared a meme that contained a misleading claim about the state of California. The meme said the state had announced it would give undocumented residents a stimulus payment on the same day it said it would lay off first responders due to diminished state funds resulting from the COVID-19 coronavirus pandemic, implying the two events are causally linked. California Gov. Gavin Newsom on April 15, 2020, acknowledged undocumented residents paid $2.5 billion in state and local taxes in 2019. He then announced the state would draw up a total of $125 million sourced from charitable donations and taxpayer funds to provide $500 stimulus payments to those residents. That was because they didn't qualify to receive federal stimulus checks under the CARES Act, a relief package meant to blunt the economic impact of the COVID-19 pandemic.

This announcement was unrelated to another statement Newsom made more than a month later. In the latter, he urged the federal government to provide financial assistance to states and local governments struggling with economic shortfalls to their operating budgets due to forced business closures during the pandemic. In an interview on CNN on May 21, Newsom stated that without federal help, cities and counties may be forced to lay off first responders.

"The next time they want to salute our heroes, our first responders, our police officers and firefighters, consider the fact that they are the first ones to be laid off by cities and counties," Newsom said when asked by CNN host Jake Tapper what would happen if the federal government failed to bail out states and local governments. "The folks who are out there, the true heroes of this pandemic, are health care workers and nurses. Those county health systems have been ravaged, their budgets have been devastated and depleted, the budget accounts depleted since this pandemic."

Budgets that deal with first responders like police, firefighters, and paramedics are generally administered by local governments, meaning it would be cities and counties in California, not the state itself, that would have discretion over whether or when to cut those services. Furthermore, Newsom didn't "announce" such layoffs would take place; he simply suggested cuts may occur in the absence of intervention from the federal government to financially shore up local governments.

As of late May, California was facing a $54 billion budget shortfall resulting from economic fallout of stay-at-home orders that forced shuttering of most commerce beginning in mid-March, in an effort to slow the spread of the COVID-19 disease. The state one year earlier had a surplus of $21 billion.

In sum, Newsom didn't "announce" layoffs for first responders but instead projected that layoffs at the local level were a looming possibility. He also didn't make the statement on the same day that he announced California would commit $125 million ($75 million of which would come from taxpayers) to give undocumented state residents $500 stimulus payments. The two events are unrelated, although the meme attempted to link them causally. We therefore rate this claim "False."

Associated Press. "California Faces a Staggering $54 Billion Budget Deficit Due to Economic Devastation from Coronavirus."   7 May 2020.