No Evidence Port Slowdown Due to 'Liberal' California Laws

A confluence of issues have created congestion at the busiest port in the U.S. 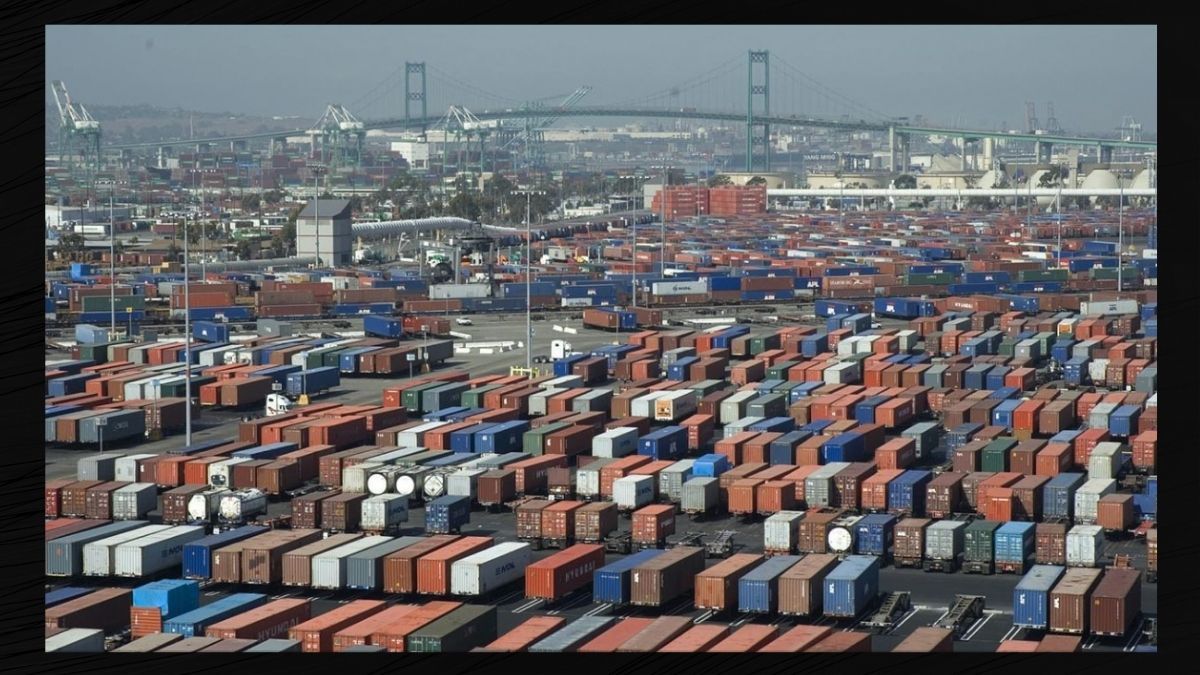 Claim:
The congestion and shipping delays at the ports of Long Beach and Los Angeles are due to California's "liberal" environmental and labor laws.
Rating: The meme above reads, in part:

So ships are piling up at Long Beach waiting to get unloaded. The port is jammed full of containers with no place to stack more. The liberal media is blaming it on the trucking industry while the nation's store shelves are becoming bare ... Well there's more to the story. Could Gavin Newsom and California's liberal trucking laws be the blame ? ?

The NEWS says the California port situation is caused by a driver shortage.

Not so fast: It is in part caused by a California Truck Ban which says all trucks must be 2011 or newer and a law called AB 5 which prohibits Owner Operators.

The two state laws mentioned are AB5, a 2019 law intended to prevent employers from wrongly classifying workers as contractors, and something called "California Truck Ban." The meme also mentions a September 2020 executive order by California Gov. Gavin Newsom that seeks to phase out fuel-burning vehicle engines by 2035 in an effort to combat global warming.

The meme is referencing congestion at the ports in San Pedro Bay in Southern California and the ports of Long Beach and Los Angeles, which collectively handle an estimated 40 percent of the nation's imports. The back-up is resulting in something of a crisis in shipping delays right before the 2021 winter holidays.

The meme above attempts to lay the blame for the crisis at the feet of Newsom, along with California labor and environmental laws. But from a broad perspective, the disruption in the supply chain is a global phenomenon sparked by a confluence of major calamities in 2020 and 2021, including labor shortages, facility closures, and an increased e-commerce demand resulting from the COVID-19 pandemic, extreme weather, and a massive container ship that had become lodged in the Suez Canal for nearly a week.

Here we will look at whether the two laws and executive order mentioned in the meme are to blame for the slowdown at the Southern California ports.

There is no law called the "California Truck Ban." But from the description above — that "all trucks must be 2011 or newer" — it appears the post is referencing the California Truck and Bus Regulation. That regulation doesn't currently block registration of vehicles from the year 2010 and older, however.

The Truck and Bus Regulation requires trucks serving the ports to have engines from 2010 or newer as of Jan. 1, 2023. If they don't, the Department of Motor Vehicles (DMV) would deny registrations to non-compliant vehicles. But the rule, which was adopted in 2008, has taken effect gradually over several years. It's not new, whereas the situation at the L.A. and Long Beach ports in the fall of 2021 is acute.

In an email, Stanley Young, spokesperson for the California Air Resource Board, told Snopes, "As of 2021 only trucks with engines older than 2005 would have their registration denied." Young added that 96 percent of the trucks currently serving the major ports in California are already compliant with the regulation.

"Despite what you may have heard or read, there is simply no evidence to support any claims that the current congestion at our ports has any connection to the state’s efforts to clean up California’s trucks," Young stated. "Since trucks at major California ports have been required to have 2007 or newer engines since 2014, and since these engines are legal until at least 2023, it’s impossible that any shortage of vehicles at ports is the result of CARB regulations."

Assembly Bill 5 (AB 5) is a California law that went into effect in January 2020, although it has faced an onslaught of legal challenges preventing it from being implemented. The law is intended to prevent companies like Uber and Instacart from misclassifying so-called gig workers as independent contractors, rather than employees.

Truckers often operate under an "owner-operator" model, in which they own their own vehicles, which they then use to transport goods as contractors for trucking companies. Both the California Trucking Association (CTA) and freight transport company Cal Cartage Express filed legal challenges against AB 5. Cal Cartage lost its case but the U.S. Supreme Court has yet to decide whether to hear a petition by CTA. Until it does, AB 5 remains in limbo for the trucking industry.

Matt Schrap, CEO of the the Harbor Trucking Association (which represents drayage truck companies serving the ports of L.A. and Long Beach) said it's not a shortage of truckers that's driving the delays, and pointing the finger at AB 5 doesn't take reality into account.

Instead, Schrap said that the 2020 COVID-19 pandemic lockdowns spurred an explosion of online buying that ramped up sharply during the pandemic lockdowns, and the ports of L.A. and Long Beach don't have the infrastructure to handle the sudden influx.

"It’s like jamming ten lanes of freeway traffic into five lanes," Schrap said in a phone interview with Snopes.

Currently, the bête noire for truckers and trucking companies at the ports of L.A. and Long Beach is an excess of empty shipping containers piling up at the ports, which often block truckers from picking up and dropping off cargo.

"We’re struggling with these empty containers," Schrap said. "That is really what’s working us over."

Schrap said he expects that the situation will start to improve, because with the sudden attention on the issue, officials are taking steps to help resolve it, like placing fees on cargo ship companies that leave behind empty containers, and potentially allowing empty container stacking on empty parcels of land at the ports.

But these are just Bandaids on a larger problem, which is that the Southern California ports need investment in infrastructure to prevent crises like these, Schrap stressed.

"We’re in this problem because of the underinvestment in the infrastructure that supports the American consumer’s buying habits," Schrap said. "It's a temporary solution to a longstanding problem."

Newsom issued an executive order in September 2020 seeking to phase out gas-burning vehicles by making all new vehicles sold as of 2035 and beyond zero-emission.

But Newsom's order wouldn't make the current fuel-powered trucks illegal as of 2035. The executive order explicitly states that while California will require new vehicles sold as of 2035 and beyond to be zero-emission, older vehicles will not be illegal to own and operate, and can still be purchased and sold.

A news release from the governor's office announcing the order states, "The executive order will not prevent Californians from owning gasoline-powered cars or selling them on the used car market."