Did a California DA Say Looting Is 'Okay' If Suspects 'Need' What They Steal?

Conservative websites and commentators misrepresented internal prosecutorial guidelines leaked in the summer of 2020. 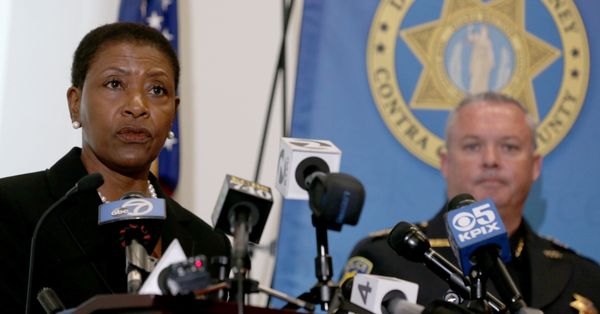 Claim:
In internal guidelines, Contra Costa, California, District Attorney Diana Becton indicated that looting was acceptable and would not be prosecuted if a suspect "needed" what was stolen.
Rating:

In August and September 2020, readers asked Snopes to examine the accuracy of online articles that claimed a California prosecutor had indicated looting was acceptable in cases where the individual involved "needs" the items stolen.

On Aug. 30, 2020, the Organic Prepper website published an article with the headline "These People Want to Convince Everyone That Looting is A-Okay." The article contained a section with the heading "Looting is Okay if They 'Need' the Item," claiming that:

According to a document obtained by Red State News, Diana Becton, the district attorney of Contra Costa County, California, has changed up how looters are charged during a state of emergency.

In order to promote consistent and equitable filing practices the follow[ing] analysis is to be applied when giving consideration to filing of PC 463 (Looting):

a. Factors to consider in making this determination:

i. Was the target business open or closed to the public during the state of emergency?
ii. What was the manner and means by which the suspect gained entry to the business?
iii. What was the nature/quantity/value of the goods targeted?
iv. Was the theft committed for financial gain or personal need?
v. Is there an articulable reason why another statute wouldn’t adequately address the particular incident?"

Oh. Well. If you need those shoes and purses, then it’s totally different...

On Aug. 31, 2020, conservative talk show host Ben Ferguson posted a Facebook meme composed of a screenshot of Red State's headline ("Soros DA Diana Becton Requires Officers Consider Whether a Looter 'Needed' Stolen Goods Before Charging"), along with his own summary of Becton's position: "So now it's okay to loot as long as you 'need' it?! ... This is sick!" Ferguson's remarks, and the descriptions included in the Organic Prepper's article, did not constitute an accurate summary or representation of Becton's prosecutorial guidelines around looting offenses.

On Aug. 27, the right-leaning Red State website posted an article with the headline "Soros DA Diana Becton Requires Officers Consider Whether a Looter 'Needed' Stolen Goods Before Charging." That article claimed to include a leaked document consisting of the internal "looting guidelines" quoted above by the Organic Prepper.

Those guidelines were real, and the document was authentic. A spokesperson for the Contra Costa DA's office confirmed for Snopes that Becton, who is the county's first Black and first female district attorney ever, issued the guidelines in June 2020.

Section 463 of the California Penal Code sets out the state's prohibition against looting. In brief, it upgrades the existing crimes of burglary, grand theft, and petty theft, where a state of emergency or evacuation order has been declared in a given location. In the cases of burglary and grand theft, the law states that when upgraded to crimes of looting, those offenses are "punishable by imprisonment in a county jail for one year or pursuant to subdivision (h) of Section 1170" — that is, up to three years' imprisonment.

Becton's guidelines encouraged prosecutors to make a distinction between theft and burglary offenses that merely happen to take place in a state of emergency, and those that are "substantially motivated by" the existence of the state of emergency.

In order to help them make that distinction, and decide whether it would be advisable or warranted to charge an individual with looting as opposed to theft or burglary, the document sets out five factors to consider: whether the business targeted was closed or open to the public; the means by which the offender entered the business; the quantity and value of the items stolen; whether the offense was committed "for financial gain or personal need"; whether a different statute (other than Section 463) would adequately address the offense committed.

Crucially, the guidelines do not state or indicate that an individual who, during a state of emergency, committed theft or burglary for "personal need" would not be charged with looting. That absolutely remains a real possibility under Becton's guidelines, and one that her spokesperson reaffirmed in response to questions submitted by Snopes. Therefore, the claim that Becton had indicated looting was "okay" if the offender "needed" the items stolen was false, not least because it implied that Becton, or her office, had engaged in a degree of moral absolution as well as legal predetermination, neither of which they had done.

Prosecutors routinely exercise broad discretion in deciding whether to charge individuals suspected of having committed crimes, and how to charge individuals who may have committed several criminal offenses in one action. The factors that influence those decisions are complex and manifold, but prosecutors often weigh the strength of the evidence available, the resources available to them to take upgraded offenses to trial, as well as less tangible considerations, such as political or public pressure, or the broader "interest of justice."

Due to the existence of that discretion in the decision of whether to upgrade theft or burglary charges to looting, it makes sense for a prosecuting agency to attempt to mitigate against any inconsistencies or biases in the decision-making process. Hence the guidelines issued in June.

"We evaluate all possible factors in reviewing whether or not to file criminal charges. We always have an ethical responsibility to ensure when filing a case we can meet the high burden of proving the case to a jury and prove the facts underlining the alleged criminal offense beyond a reasonable doubt. The factors outlined in the policy are similar for our review of [other] criminal offenses — examining the intent and reasons why a crime was committed along with all the other available evidence."

The function of Becton's document was to provide her prosecutors with black-and-white guidelines in order to help them decide whether to charge an arrested person with looting, or charge them with the underlying burglary or theft offenses. It was simply not the case that the document required or even advised prosecutors not to go ahead with a looting charge if the suspect was found to have been motivated by "personal need."

It was also not the case that suspects would go free entirely if a prosecutor decided not to charge an individual with looting, after considering the five factors set out in the guidelines. In that scenario, the individual would still be charged with the underlying offense of burglary or theft, just not the upgraded charge of looting.

Thus the Daily Wire erred in claiming that Becton's guidelines required law enforcement "to consider if looters needed their loot before the police charged them with a crime." Similarly, the blog USSA News falsely claimed that Becton had "openly admitted that she’s going to look the other way at looting in her jurisdiction as long as the people involved can prove they needed the Louis Vuitton purse and weren’t stealing it for personal gain."

The Organic Prepper.  "These People Want to Convince Everyone That Looting is A-Okay."   30 August 2020.