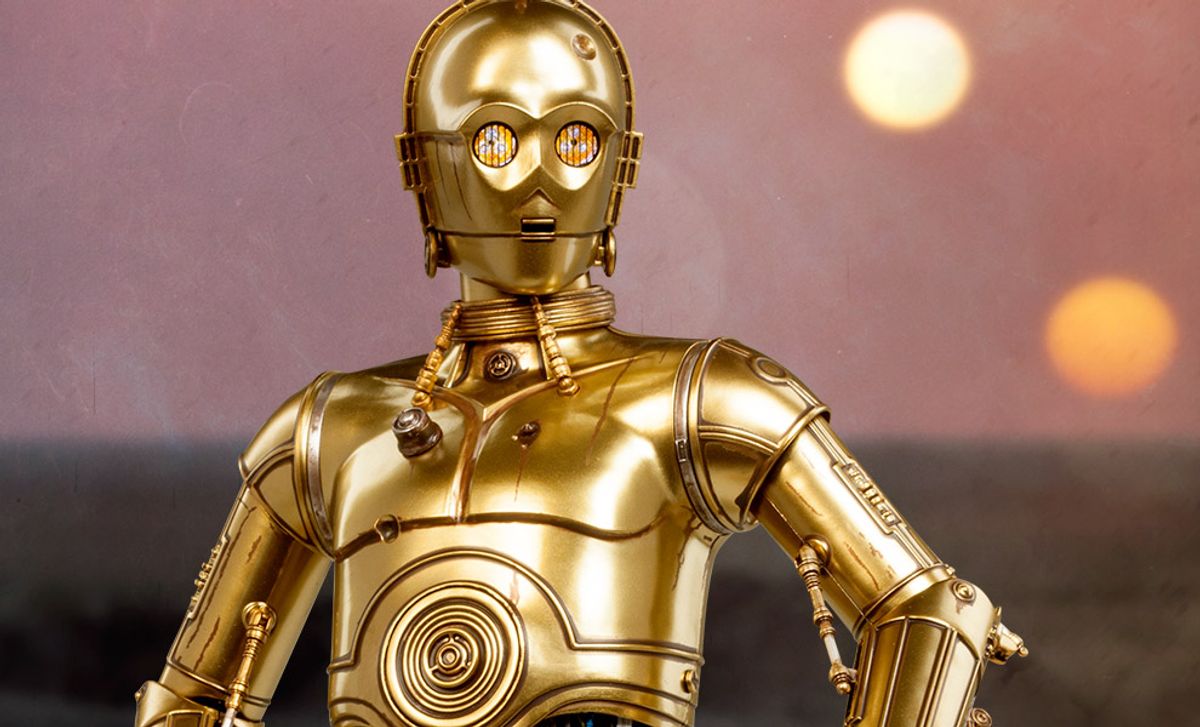 Claim:
A Star Wars trading card was altered to depict the droid C-3P0 with an oversized penis.
Rating: Just how did this image end up on a trading card? As usual, legend places the blame on a disgruntled or prankish artist, just as in the examples of the infamous cover from Disney's The Little Mermaid video and the notorious Renuzit air freshener can. For what it's worth, the official Star Wars web site described what's seen here is just a "trick of timing and light":

[I]t appears that the extra appendage is not the work of an artist, but rather a trick of timing and light. The untouched archive photo shows the image just as it appears on the card. The current theory is that at the exact instant the photo was snapped, a piece fell off the Threepio costume, and just happened to line up in such a way as to suggest a bawdy image. The original contact sheets from the photo-shoot attests to this. They are not retouched in any way, yet still contain the same image. Whatever the real explanation is, the 'mischievous airbrush artist' scenario simply doesn't fit.

Intentional or not, the depiction of a well-hung C-3P0 was realistic enough that Topps later replaced the card with an air-brushed one featuring a tamer rendering. That action spawned a (false) sub-legend that the original version of the card is now comparatively rare and valuable:

Various stories exist about how the image came to be included in the set, everything from an accidental trick of the light, to a deliberate prank by either a LucasFilm or a Topps employee. However it happened, it made card number 207 one of the most famous vintage Star Wars cards ever produced.

Card number 207, as it was originally printed, appeared to give C-3P0 an added appendage that would not be particularly necessary for a droid. For this reason, the card is often referred to by collectors as the obscene version of the card. In reality, the added appendage (which might indeed be a trick of the light in the photograph) isn't terribly noticeable at first glance, and far from being obscene, is somewhat humorous in appearance.

Parents of course were not amused, and as rumors about the existence of an 'obscene' Star Wars card circulated, complaints began to come in. Topps responded by reprinting card 207 for subsequent print lots.