Did BuzzFeed Advocate for Taking Away White People's Guns?

A fake image suggested that Buzzfeed had published a story headlined "Why We Need To Take Away White People's Guns Now, More Than Ever. " 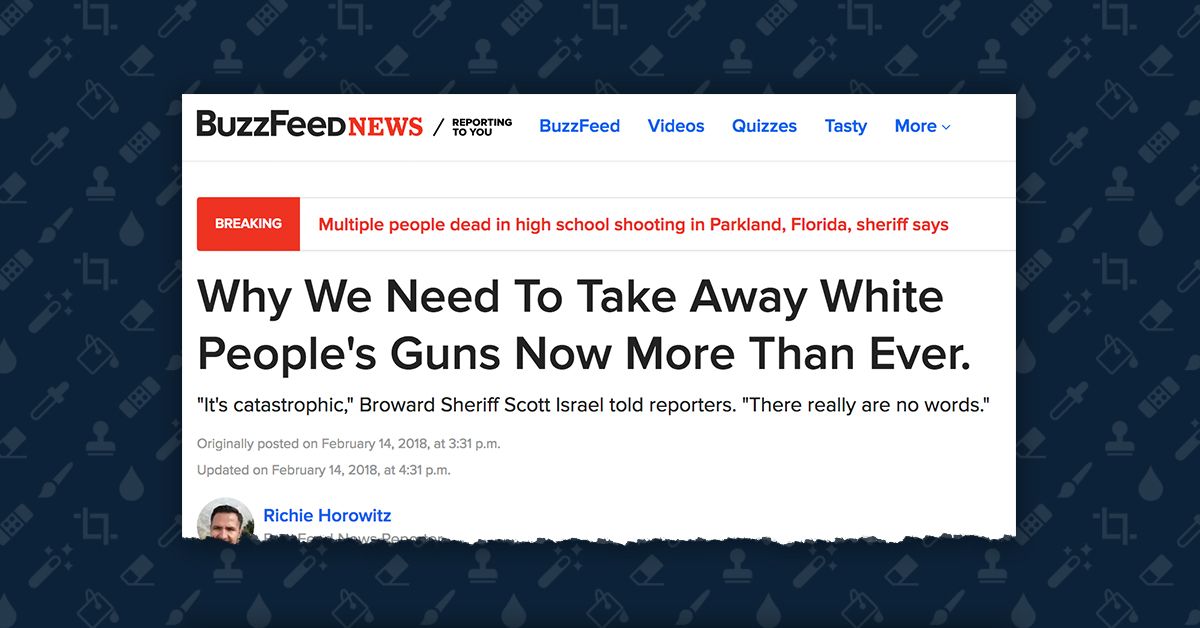 Claim:
BuzzFeed News published a story calling for guns to be taken away from white people.
Rating:

In the aftermath of a deadly mass shooting at a Florida high school on 14 February 2018, a fake screenshot of a Buzzfeed News story arguing that white people should have their guns taken away spread online.

Seventeen people lost their lives in the 14 February shooting at Marjory Stoneman Douglas High School in Parkland, Florida, and more than a dozen were wounded. Nikolas Cruz, 19, has been arrested and charged with the murders. As is often the case in such incidents, while journalists, law enforcement, victims, and their loved ones were scrambling to ascertain and disseminate accurate information in the ensuing panic, disreputable internet personalities swooped in and exploited the confusion to spread false information.

The fake screenshot appeared in the midst of this milieu. It bore the inflammatory headline "Why We Need To Take Away White People's Guns Now, More Than Ever" appeared on social media and attributed a fabricated quote to the Broward county sheriff, who has an apparently Jewish name: The fake screenshot, first appeared on the message board 4chan -- then got a major signal boost when the white supremacist Twitter account MAGA Pill tweeted it out. MAGA Pill gained fame when U.S. President Donald Trump retweeted the account in November 2017.

Lucian Wintrich, White House correspondent for the conspiratorial far-right blog GatewayPundit.com also tweeted the image to his audience of nearly 50,000. Wintrich attempted to use the screenshot of the fake story to attack African Americans, despite the fact that no African Americans were implicated in the shooting. Wintrich later deleted the tweet but it is visible in a screen capture posted by BuzzFeed editor Brandon Wall:

Here is the obviously fake BuzzFeed screenshot in question shared by none other than Gateway Pundit’s Lucian Wintrich pic.twitter.com/7iHFU9w9HD

We're not going to comment on another outlet's editorial standards, but any effort to exploit racial tensions in the middle of a tragedy is repugnant and dangerous. News organizations bear a responsibility for calling these posts what they are: shameful attempts to prey on people's fears during a crisis, spread by some of the worst elements in our society.

GatewayPundit.com has a track record of disseminating unsourced or false information in the aftermath of mass casualty incidents, including publicly identifying an innocent man in August 2017 as the man who killed a person with his car at a white supremacist rally in Charlottesville, Virginia. In July 2017, Wintrich posted an image on Twitter of Native Americans making obscene gestures at Mount Rushmore and claimed they were immigrants who "broke into" the United States.

The fake BuzzFeed story wasn't the only attempt to spread falsified posts in an attempt to smear the news media or spread racial rumors about the shooting.

Alex Harris, a journalist for the Miami Herald, reported that two tweets she wrote were doctored and spread on Twitter to make it appear as if she had asked about the ethnicity of the shooter and for pictures of deceased people when she had done nothing of the kind:

There are 2 fake tweets circulating today attributed to me. They are doctored versions of tweets I sent while trying to tell the stories of victims and survivors -- important stories that need to be heard. I did not ask if the shooter was white nor ask for photos of dead bodies.

Social media users also posted false claims that Cruz is an undocumented immigrant, a DACA recipient, an antifa member, and that he is affiliated with the Islamic State. However on 15 February 2018 the leader of the white supremacist group Republic of Florida claimed that Cruz was associated with his group.