Did Websites Report That Both Buttigieg and Grenell Were 'First' LGBT Cabinet Members?

Those claims cannot both be true. 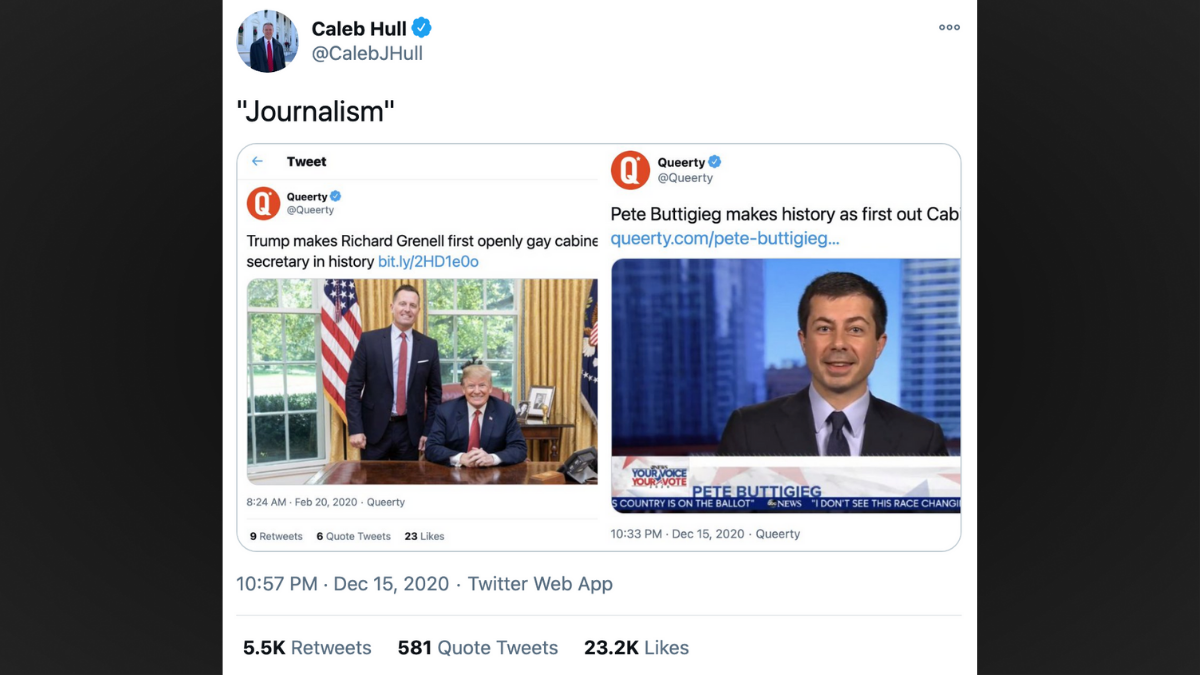 In December 2020, U.S. President-elect Joe Biden named Pete Buttigieg, former mayor of South Bend, Indiana, and former Democratic presidential primary candidate, as his nominee for the position of transportation secretary. The announcement prompted a wave of news articles reporting that Buttigieg, who is a gay man, would become the first openly LGBT Cabinet member in United States history if his appointment is confirmed by the Senate.

On Dec. 15, Caleb Hull shared two screenshots of tweets by Queerty, along with the dry observation "'Journalism.'" The tweet shown on the left was dated Feb. 20, 2020, and read, "Trump makes Richard Grenell first openly gay cabinet secretary in history." The tweet shown on the right was dated Dec. 15, 2020, and read, "Pete Buttigieg makes history as first out cabinet member": Both tweets were authentic, and Hull therefore correctly attributed each of them to Queerty. The tweet relating to Grenell's appointment can be found here and included a link to a Queerty article that further described Grenell as "the first openly gay man to hold a cabinet position."

The tweet relating to Buttigieg's nomination can be found here and included a link to an article on Queerty's sister site LGBTQ Nation that reported Buttigieg "will be the first out gay person to be a member of the presidential Cabinet."

Queerty, therefore, did indeed report in February 2020 that Grenell was the "first openly gay Cabinet secretary in history," before later describing Buttigieg as the "first out Cabinet member." Those are mutually incompatible statements. Those tweets were also authentic, and can be viewed here and here.

A dispute has arisen over whether Grenell should be considered a Cabinet member. On Dec. 16, Queerty itself wrote scathingly of the claim — made by Queerty and others — that Grenell was the first openly gay cabinet member:

Within minutes of the announcement, Trump supporters were calling Buttigieg’s historic nomination #fakenews. They argued that Richard Grennell [sic] was actually the first openly gay person to serve as a member of the presidential Cabinet when he was appointed Acting Director of National Intelligence by Donald Trump earlier this year.

While Trump & Co. love making this claim, there’s always been a caveat that they’ve ignored. Because while Grenell was, indeed, appointed to Trump’s cabinet, he only served in an interim capacity for three months, and he never had a formal Senate hearing because Trump had him jettisoned out the minute it became clear he’d never get confirmed.

...Of course, Trump supporters have never been great at paying close attention to details or believing, you know, facts, so they’re pissed that media outlets are reporting Buttigieg is set to become the first openly LGBTQ cabinet official in history.

LGBTQ Nation, in reporting on Buttigieg's nomination for Transport Secretary, drew the same distinction, writing that:

While President Donald Trump appointed Richard Grenell as acting Director of National Intelligence, a Cabinet-level position, Grenell wasn’t confirmed by the Senate and only served as a seat warmer for the incoming DNI.

By convention, the DNI is treated as a "Cabinet-level" or "Cabinet-rank" position, and the person who occupies that role takes part in Cabinet meetings. The DNI is responsible for reporting directly to the president on matters of national security and intelligence and effectively oversees and integrates the work of the federal agencies that make up the intelligence community. As such, it has grown to become a position of considerable power and influence within the executive branch of the U.S. government.

However, the DNI does not oversee what is known as an "executive department" (such as the Treasury Department, Defense Department, and so on, which are led by Cabinet "secretaries," with the exception of the Justice Department, which the attorney general heads). Similarly, the law that created the role of the DNI does not define it as being a Cabinet position, and the DNI is not listed as one of the 15 Cabinet members in the official order of presidential succession contained in the Succession Act.

Nonetheless, Grenell's appointment as acting DNI was not only historic in formal terms but was especially meaningful in light of the erstwhile treatment of LGBT people within the American intelligence community, who were for many decades regarded, without evidentiary basis, as a "blackmail risk" and excluded from the intelligence community. As the Brookings Institute's James Kirchik wrote in March:

For the first time in American history, an openly LGBT person will lead the intelligence community, a remarkable development considering that, until relatively recently, it not only denied employment to gay and lesbian Americans but thoroughly purged them from its ranks...

While Trump’s appointment of Grenell can be criticized on other grounds, the appointment of an openly gay man to head an institution once closed to gays and lesbians is a milestone. Along with Pete Buttigieg’s historic presidential campaign, it is a sign of progress that people who harbored what was once considered the most shameful secret are now entrusted with guarding the nation’s most sensitive ones.