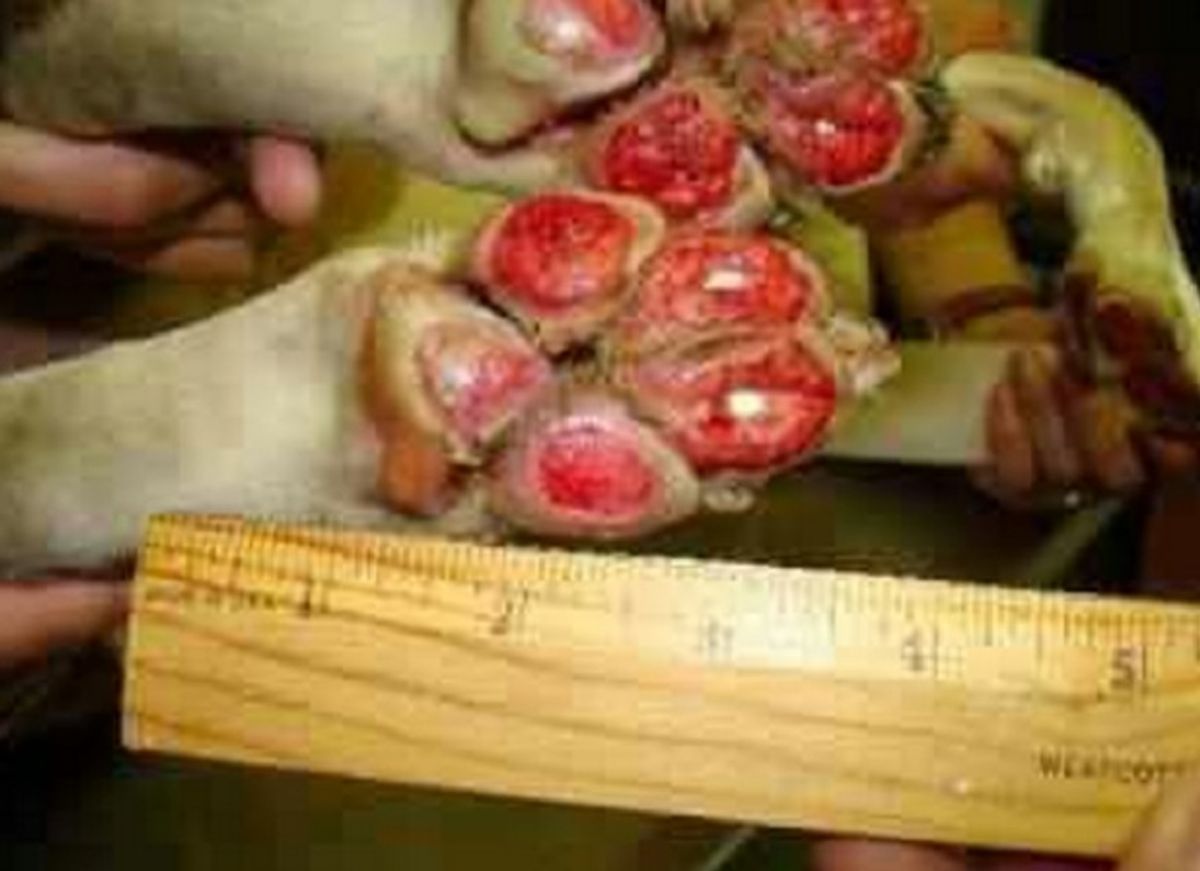 FACT CHECK:   Does a photograph show the paws of a dog that were badly burned due to his being walked on hot asphalt or concrete?

Claim:    Photograph shows the paws of a dog that were badly burned due to his being walked on hot asphalt or concrete.

Origins:   Since at least April 2013 the above-displayed photograph has circulated with appended text warning that "THIS" (i.e., the gruesome state of the poor dog depicted's paws) is why pet owners should avoid walking dogs on hot concrete or asphalt during the summer months.

However, although photograph does depict a dog who suffered grievous paw injuries from contact with a hot surface, the injuries did not stem from his owner's carelessly walking him on a sidewalk or street on an extremely hot day. Rather, the image was taken from a 2011 article about an animal neglect case involving life-threatening burn injuries sustained by a pit bull left on a rooftop during a heatwave:

Bernie was found on a rooftop of a row home in Reading, Pa., in the midst of a heat wave July 19. When police found him, the pit bull had severe, third-degree burns on all four feet, and on his back and belly, probably from falling or rolling over as his pads were scorched.

Although Bernie's condition was grave when he was found, prompt medical attention (including a new stem cell treatment) set him on the road to recovery within a month:

To look at Bernie today, one would never guess his injuries were enough to warrant euthanasia. But a new stem cell treatment, which required special permission from the U.S. Food and Drug Administration (FDA), may have saved the dog's life.

"I would have thought that with such severe third-degree burns on these feet, you would have gotten a lot of scarring and deformity ... and it would have taken a lot longer than one month to heal," says Boyd Wagner, BVMS, MRCVS, and 25-year owner of the seven-veterinarian Wyomissing Animal Hospital, where Bernie was treated. "If you look at these feet now, there's beautiful epithelial tissue — like a baby's bottom."

"When you see day one and four weeks later, you'd be very impressed. Was it the stem cells? I can't say that. But the dog feels better," Wagner says. "I can't believe how bad these were burned. And to see him four weeks later almost totally healed — I'm flabbergasted."

Regardless of the photo's origins, it is true, according to the ASPCA, that dog walks should be restricted (but not necessarily discontinued) during periods of high heat:

When the temperature is very high, don't let your dog linger on hot asphalt. Being so close the ground, your pooch's body can heat up quickly, and sensitive paw pads can burn. Keep walks during these times to a minimum.

Similarly, the Humane Society says dog owners should be mindful of a battery of concerns about their pets during periods of excessive heat:

Take care when exercising your pet. Adjust intensity and duration of exercise in accordance with the temperature. On very hot days, limit exercise to early morning or evening hours, and be especially careful with pets with white-colored ears, who are more susceptible to skin cancer, and short-nosed pets, who typically have difficulty breathing. Asphalt gets very hot and can burn your pet's paws, so walk your dog on the grass if possible. Always carry water with you to keep your dog from dehydrating.

According to a 2011 Accuweather article, high temperatures can lead to dogs' sustaining burns on their paws and exhibiting symptoms of pain and discomfort similar to those of their humans:

The signs that a dog has burned pads are limping, refusing to walk, darker than usual pads, blisters, redness, missing parts of the pad or licking and chewing the foot.

A dog that has been in the water for a while is more easily injured due to pads that have been softened ... If your dog experiences any of these symptoms, the best treatment is to immediately flush the injured paw with cool water, get the dog to a grassy area, and carry him/her if possible.

So while it is indeed possible for dogs to sustain paw burns under conditions of excessive heat, it's unlikely this situation would escape the notice of an attentive walker.