Does This Photograph Show a Woman About to Be Stoned to Death in Iran? 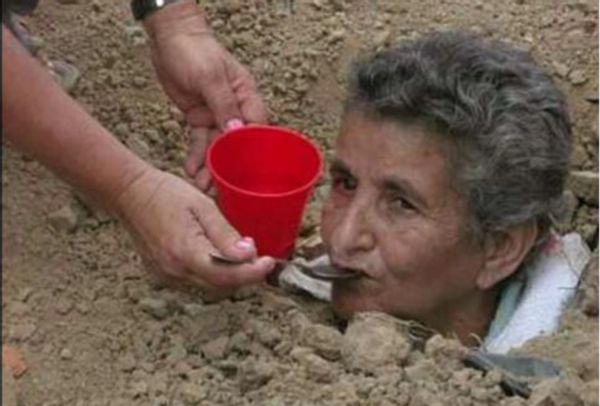 Claim:
A photograph shows a woman buried up to her neck jsut before being stoned to death in Iran.
Rating:

A post repeatedly shared on social media features a photograph of a woman completely buried in the ground up to her neck, being fed water from a spoon by an onlooker. The claim offered in conjunction with this image is that it depicts a woman "about to be stoned to death" in Iran, who is being "allowed ...a spoonful of water before her agonizing death:"

A******s of Thornton Reuters here is a lady who is 'allowed' 3 sips of water before being stoned to death. How safe is she, according to you ? pic.twitter.com/Kaiuu8xM4c

Although Iran has been criticized for allowing the use of stoning as a form of capital punishment (either officially or extrajudicially), the photograph shown above has nothing to do with a stoning, Islam, Sharia law, Iran, or any form of execution or punishment.

The buried person pictured here is a 66-year-old Colombian woman named Maria Gabriela Ruiz, one of three people who voluntarily remained buried up to their necks in the ground for days on end in July 2003, as a protest over the government's failure to relocate 150 displaced persons to a safer part of the city of Cali.

Multiple news coverage photographs documented the protest, with the picture shown above being captioned as follows:

Colombian Maria Gabriela Ruiz, 66, is aided by a woman while she lies buried in the ground up to her neck along with Olmedo Gomez, 42, and Nicolas Salazar, 32, during a protest in a popular sector of Cali, July 4, 2003. Three people, two men and a woman, buried themselves three days ago in protest against the government because 150 displaced persons have not been relocated to a safe sector of Cali.