Did This Woman Confuse Spray Foam Insulation for Mousse?

A photograph supposedly shows a woman who mistakenly used expanding foam insulation on her hair instead of hair mousse. 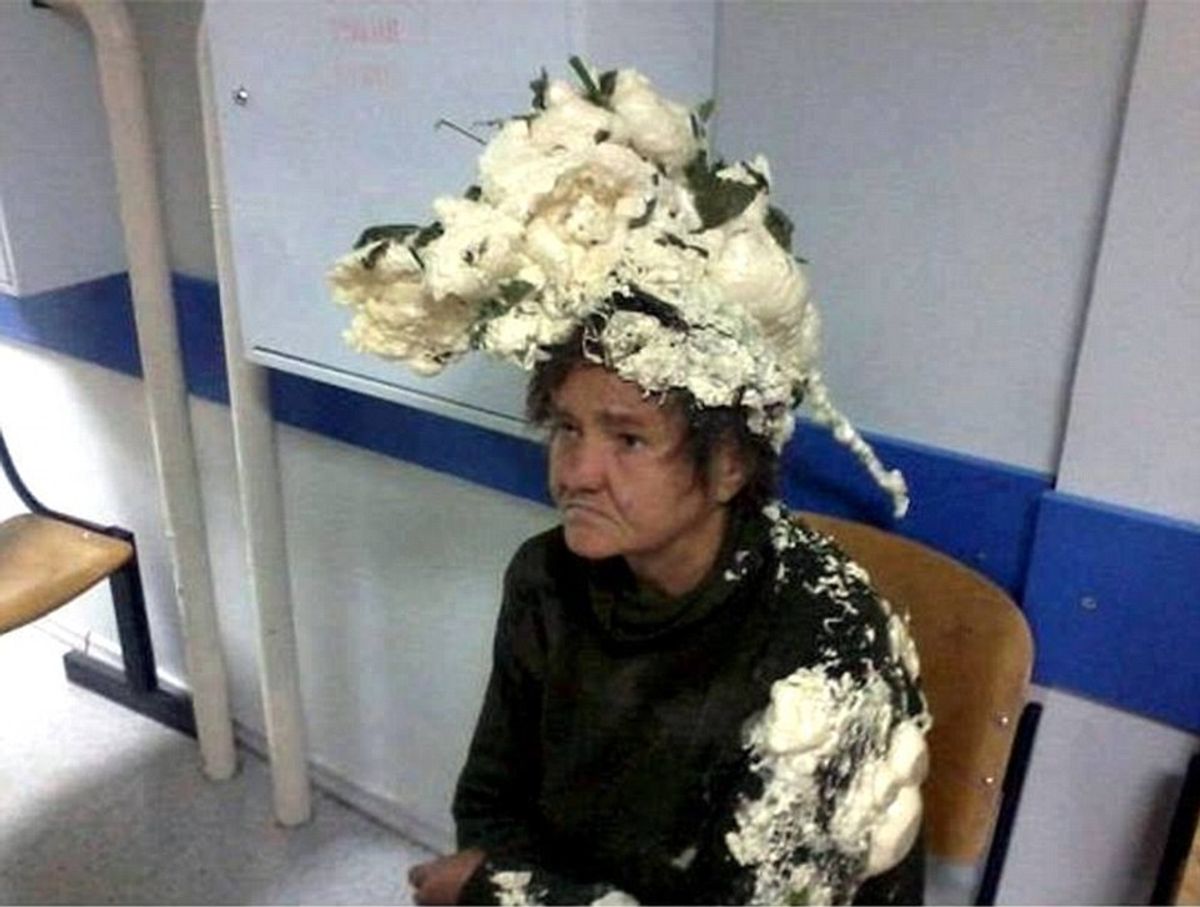 Claim:
A photograph shows a woman who mistakenly used expanding foam insulation on her hair instead of hair mousse.
Rating:

In September 2015, an unusual image began circulating on social media that almost invariably described as depicting a hapless woman who mistook a can of builder's foam for hair mousse (resulting in a trip to the emergency room): The origin of the photograph is unknown. Although a version was uploaded to Reddit on 29 September 2015, the top comments on that thread claimed the image was neither new nor likely accurately described:

And she seems to have confused sticks and leaves for curlers. I think there is a different story to this pic.

Last time this image was posted it was claimed that she mistook it for shampoo. Still doesn't add up.

Apparently based solely on social media claims, a number of news outlets circulated the photograph with the rumored backstory (and no additional verification as to whether that assertion was in any way accurate). The New York Daily News, Mashable, KFOR, the Mirror, Yahoo! UK, and the Daily Mail were among news outlets who ran articles claiming the unfortunate woman depicted confused spray insulation for hair product.

The absolute lack of any information substantiating the claim was no barrier to its widespread appearance on news web sites. The New York Daily News and Yahoo! UK reported respectively:

A woman sprayed builder's foam in her hair when she thought she was just using her mousse. The synthetic sealant apparently added some major poof to her hair.

Pictures trending with hashtags like “#badhairday” and “#DIY” show her waiting in an Eastern European emergency room after the mixup, Yahoo! UK reported.

The mystery woman ended up in A&E after presumably misreading a label and slathering the polyurethane foam all over her head.

The DIY substance is used for filling gaps around the home and holding items in place -- definitely not for achieving a well-coiffured hair style.

An image of the woman sat in hospital -- thought to be in Eastern Europe -- has since been widely shared on social media.

The Mirror maintained that "This astonishing picture shows what happens if builder's foam gets mixed up with shampoo."

Although a number of the news outlets observed that the purported mix-up was uncommon, few if any added that it was unlikely or implausible (which was apparent from the photograph). Moreover, no one stopped to note that the presence of other debris in the woman's hair (as noted by Reddit users) suggested an entirely different chain of events than the one described as the photograph's definitive explanation. And the details of the incident varied from site to site: in some, the woman "misread" the label (itself a virtual impossibility); in others, the outcome was the result of a reaction between foam and shampoo.

After publication, Mashable noted as an aside that the image had been uploaded on 16 September 2015 to a Russian web site.

Confusing spray foam with shampoo as a cause was basically a non-starter, as almost all shampoo comes in squeeze or pump bottles (not spray cans, save for the uncommon "dry" variety). Moreover, mistaking building foam spray for any sort of grooming product beggared belief considering most of the former involves a distinctive (and fiddly) applicator extension: The original poster never returned to the Russian web site's comment thread to proffer any sort of explanation for the photograph, and no users initially discussing the image claimed or even suggested it depicted a woman who mistook building supplies for shampoo or hair mousse. The most popular consensus on the thread appeared to be that the woman was attacked by another person, and although that scenario was also speculation, no posters fronted the "hairstyling gone awry" claim. Some readers surmised that the woman depicted was homeless and sleeping outside when the incident occurred, while others imagined an intoxicated husband was responsible for (deliberately) dousing her in the material.

Neither the woman depicted nor even the location in which the photograph was snapped was known at the time of its wide-ranging circulation on news sites and social media. And while the exact circumstances of the photo remained a mystery, no evidence suggested the exceedingly unlikely claim of hairstyling confusion was either plausible or accurate.