We found several Facebook posts from scammers that misleadingly claimed Mars and other celebrities were giving away $750 gift cards or even $10,000 in cash. 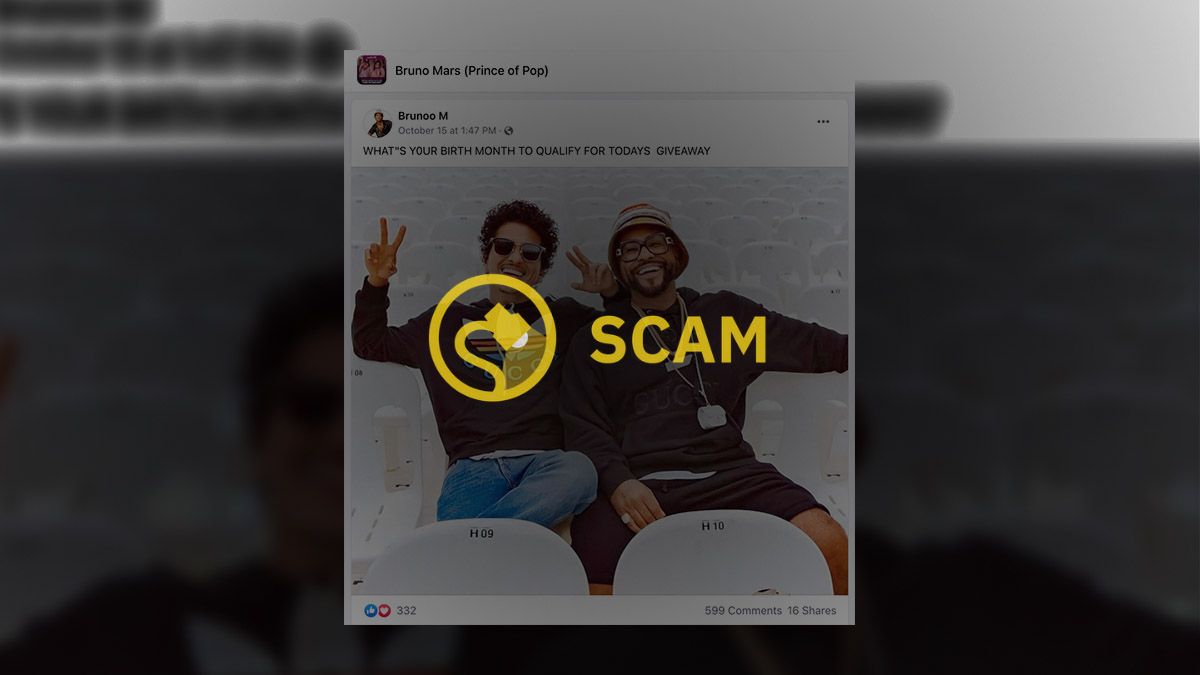 Claim:
According to a Facebook post, users simply need to provide their birth month to win gift cards or cash from Bruno Mars.
Rating:

In October 2022, we received mail from a reader that asked if musician Bruno Mars was holding a Facebook giveaway for gift cards worth $750 or $10,000 in cash. We did some quick digging and, as expected, were able to confirm that scammers were behind these posts. Mars was not giving away money on Facebook, nor did he have anything to do with the scam.

In the past, we witnessed these same kinds of scam giveaways using the photo and likeness of former talk show host Ellen DeGeneres. There were so many of these scams for "The Ellen DeGeneres Show" for so many years that we reported about them on three separate occasions.

As for Mars, we found Facebook posts that asked, in all capital letters, "What's your birth month to qualify for today's giveaway?" It read like this: "WHAT"S Y0UR BIRTH MONTH TO QUALIFY FOR TODAYS GIVEAWAY." In the captions we looked at, the number "0" appeared where the letter "O" belonged in the word "Y0UR," perhaps as a way to hide the posts from searches that were trying to uncover other scam posts with similar language. A quotation mark character also was incorrectly placed in the first word of the sentence, rather than an apostrophe.

Tyler Perry and Garth Brooks, too

In addition to Mars, we found Facebook posts that indicated scammers were pushing the same fake promotions with the photos and likenesses of filmmaker Tyler Perry and musician Garth Brooks. This wasn't the first time we reported about Perry being used in Facebook scams, either. This one mentioned "Garth" but showed a picture of Mars.

These scams appeared to be hosted by several fairly large and unofficial Bruno Mars Facebook groups, some of which had been created by fans. Always keep this in mind when it comes to suspicious offers: If it seems too good to be true, it probably is.

After some users believed the scam was real and commented with their birth month, the scammers then directed them in replies to click a link. The links in those replies went to a page on either sites.google.com or blogspot.com. Those pages made the same promise about Mars, Perry, and Brooks holding a giveaway for either $750 in gift cards or $10,000 in cash. A link at the bottom of that landing page then went to a second website that hosted survey scams.

Survey scams are a specific kind of ruse. They promise big prizes up front, but then lead to a seemingly endless number of surveys with other tantalizing prize promises. Such survey scams often begin with a big promise of $750 delivered via PayPal or Cash App. Usually, the scammers who create the Facebook posts are hoping that users sign up for accounts on various websites that pop up during the survey scams, as they might land them small amounts of referral commission.

At the same time, survey scams also have a chance of being quite dangerous, reported AARP.org:

Amid questions about the supposed subject, sham surveys solicit personal or financial information, such as a credit card number to pay a shipping fee for your prize — something a legit survey will not do. They might trick you into signing up for a “free trial” offer that’s actually a costly subscription for a dietary supplement or other product.

We strongly advise all of our readers to never click any links in offers that seem too good to be true. Also, we recommend sharing this article with family members or friends who might be fans of Mars, Brooks, and Perry, as they might be more susceptible to falling for the scams.