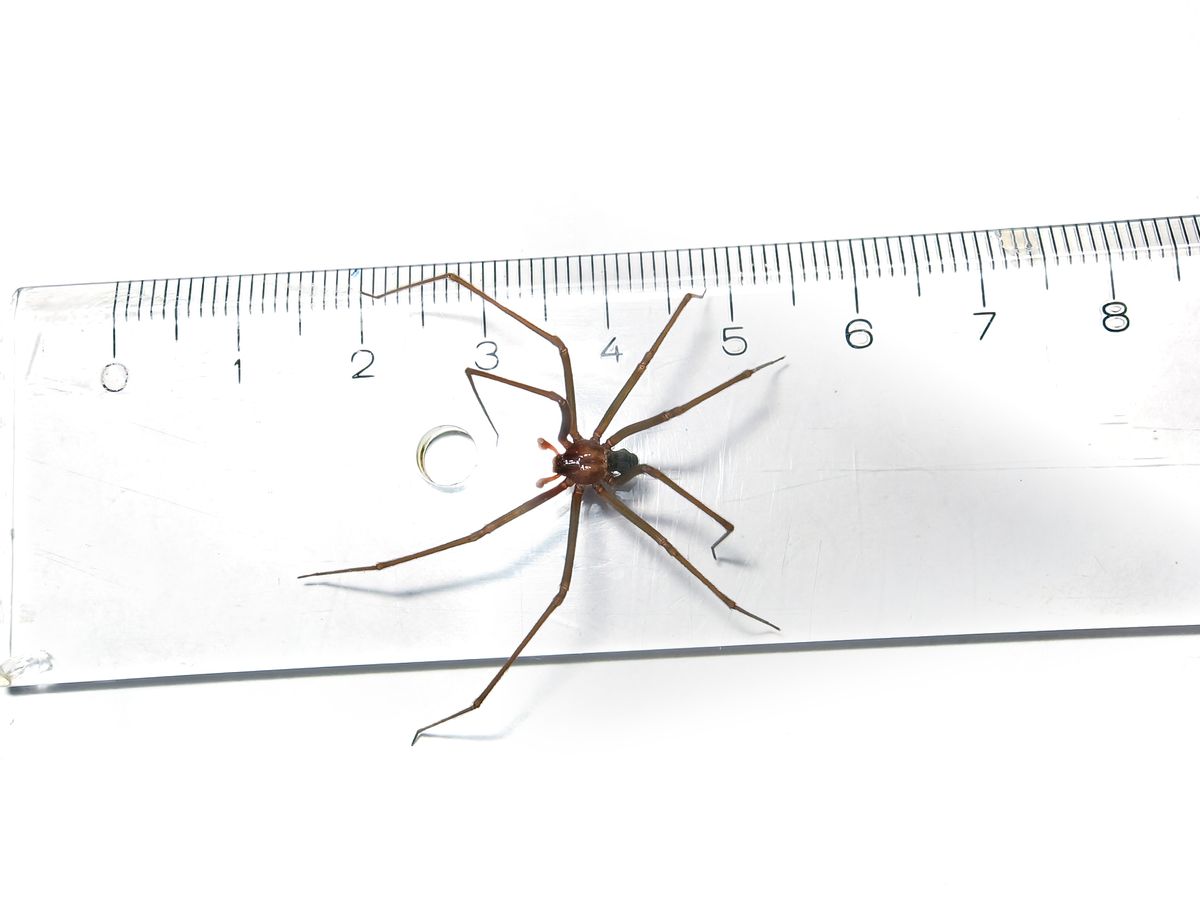 Top view of a recluse spider (Loxosceles sp. known locally as aranha-marrom) from Brazil over a ruler on a white background, size in centimeters. (Image Via Getty Images)

In late August 2019, a viral social media post about brown recluse spiders hiding in delivery boxes from online retailers Amazon and Chewy gave many the creepy-crawlies. We contacted the person who posted the item, David Ohnefloss, who told us he has been an exterminator for 30 years and has never seen a brown recluse infestation that he believes hitch-hiked into his customer's home via a delivery box. But, he told us, because brown recluse spiders aren't native to northern Kentucky, where he lives, and because his customer's home is regularly serviced, he suspects the spiders came in with a delivery of an artificial Christmas tree, which was where the infestation was concentrated.

Ohnefloss told us he initially posted the images with the cautionary tale for his friends and family to see on Facebook, but obliged when someone asked that he make the post public. He woke up the next morning to find the post had been shared thousands of times. People viewing the post outside its context began to ask questions like, "Are brown recluse spiders being found in Amazon delivered boxes?"

That is very unlikely, Ohnefloss told us. The point of his post, he said, was just to urge people to open newly arrived boxes outside, if they can. "If you guys are ordering on the internet, just be aware of what could be coming in the box. You don't have to freak out, but be wary, because we really don't know where these products originate."

But he also wanted to encourage people not to panic about internet rumors of a rash of spiders being delivered into people's homes via delivery boxes. "Something like this is probably a one-in-ten-thousand chance," Ohnefloss told us by phone.

Brown recluse spiders have poisonous bites, but as their name implies, they aren't aggressive and like to hide in dark places. They only thrive in certain parts of the U.S., namely the Midwest and South Central regions. Generally, as the entomology department at the University of Kentucky reports, "These spiders are widely over-reported and less common than perceived." But the venomous bites, when they occur, should be treated seriously.

We consulted with Rick Vetter, a retired research associate in entomology at the University of California at Riverside, and author of the book "The Brown Recluse Spider." Vetter told us it's not impossible for a spider to make its way into a delivery box, but he agreed that the scenario is unlikely.

"Both Amazon and Chewy have such high volume, disturbance and illumination in their buildings that it’s not a place that spiders are going to want to be around," Vetter told us. You're more like to encounter a brown recluse in a garage or an attic than a busy retail warehouse, he said. Vetter also noted that purchased items shipped from Amazon or Chewy would likely be placed in new boxes that were flattened before they were prepared for shipment.

Generally you should be aware of your surroundings if you live in a region where brown recluse spiders live, and exercise appropriate caution. The post above wasn't intended to claim that the poisonous spiders are being sent to homes en masse by retailers via delivery boxes, or that this should be cause for widespread public concern, although it appears many interpreted it that way. It's unknown whether an errant spider might enter a box, but it's unlikely. We therefore rate the claim "Unproven."

Updated to include comments from David Ohnefloss.