Bringing a Gun to a Knife Fight

Scott Baio asserted during a July 2016 MSNBC appearance that President Obama once said if [Republicans] "bring a knife" to a fight, [Democrats] should "bring a gun." 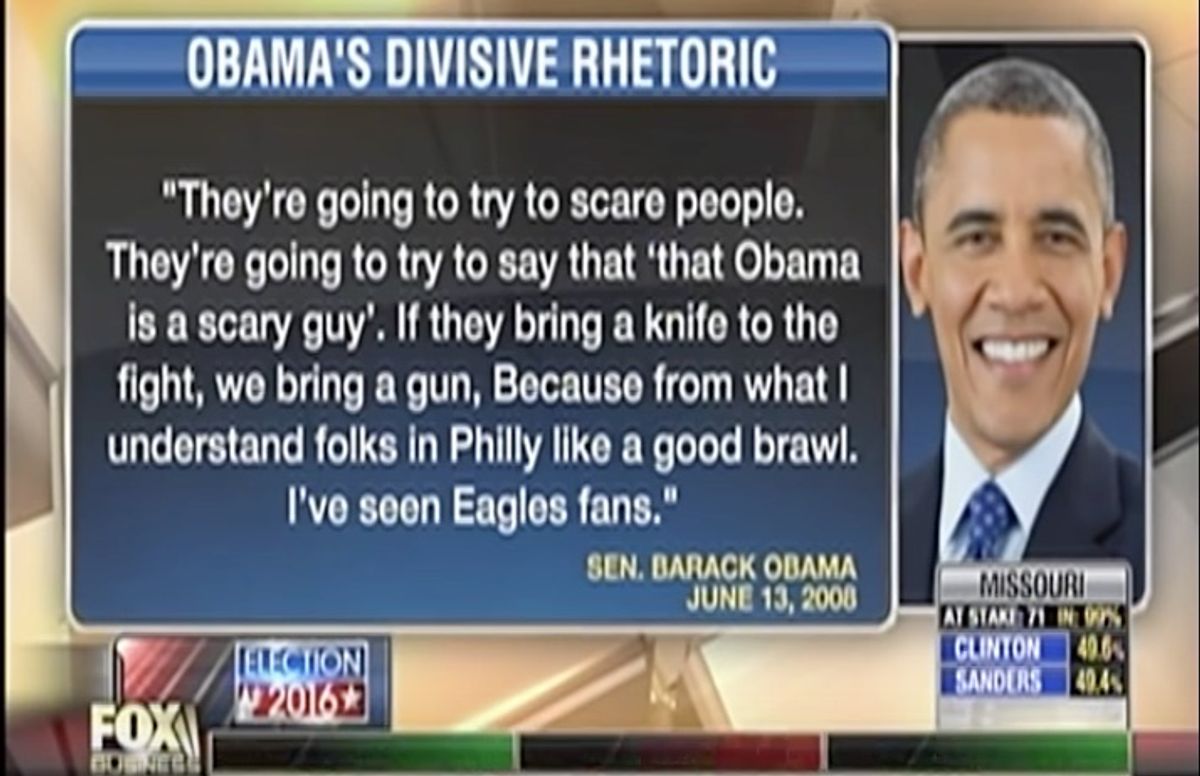 Claim:
President Obama once said that if your opponents bring a (rhetorical) knife to a fight, you should bring a gun.
Rating:

On 19 July 2016, actor Scott Baio (best known in political circles for his portrayal of Fonzie's cousin Chachi in the 1970s TV sitcom Happy Days) engaged in a contentious debate on MSNBC with NBC national correspondent Tamron Hall, during which Baio asserted (in the video above) that President Obama had once said "if they bring a knife to an argument, you bring a gun."

The exchange in question occurred during a debate over civility, and Hall challenged Baio over both his own comments as well as comments made by Donald Trump:

BAIO: Listen, there's different levels to me. You want me —

BAIO: You want me to be square and nice to everybody.

BAIO: Let me talk. And you want me to be sweet and gentle to a man, a president, who says if they bring a knife to an argument, you bring a gun. That's what President Obama said. Now, if you want me to go after a guy like that — all bets are off at that point.

HALL: That's absolutely not true. But I'll tell you this.

BAIO: That's an absolute fact. That is a quote.

Hall seemed perplexed by the claim and unaware othat President Obama had stated any such thing (for which Baio provided no context). But Baio wasn't the first to ascribe the quote to the President in 2016, as shown in an Fox Business News segment (at the end of the video above) that featured a longer version of the quote and dated it as having been uttered on 13 June 2008:

Many social media users were skeptical that the quote was legitimate, and Baio's manner of describing it didn't make it easier for viewers to pin down the circumstances under which President Obama might have said such a thing. That was likely due in part to the passage of time (more than eight years had gone by since the date appended to the on-screen transcription), although some people suggested all evidence of the comment had been scrubbed from the Internet.

The quote itself was commonly cited as having been sourced from the mob film The Untouchables and also frequently referenced by hip-hop artists. One such instance is the track "Takeover" by Jay-Z, of whom the President is a noted fan.

As it turned out, the comment was indeed made by then-Senator Obama at a fundraising event in the City of Brotherly Love, and it was not ignored by mainstream media outlets at the time. The New York Times, reported on 14 June 2008 that:

Senator Barack Obama was fund-raising in Philadelphia. But he was talking about “the Chicago way.”

Channeling the mob drama, “The Untouchables,” Mr. Obama said in reference to the general election rumble with the Republicans: “If they bring a knife to the fight, we bring a gun.”

On the same date, Reuters published an item that stated, in part:

Democratic presidential nominee Barack Obama, who regularly uses language to reinforce his modern-guy credentials, seems to have set that aside when he explained how he won’t be cowed by Republican attacks.

“If they bring a knife to the fight, we bring a gun,” Obama said at a fund-raiser in Philadelphia on Friday, employing a phrase that could have been lifted from a gangster movie. “Because from what I understand, folks in Philly like a good brawl. I’ve seen Eagles fans,” he said, referring to the city’s football team.

The Wall Street Journal provided a sliver of additional context to the statement:

Mobster wisdom tells us never to bring a knife to a gun fight. But what does political wisdom say about bringing a gun to a knife fight?

That’s exactly what Barack Obama said he would do to counter Republican attacks “If they bring a knife to the fight, we bring a gun,” Obama said at a Philadelphia fundraise. “Because from what I understand folks in Philly like a good brawl. I’ve seen Eagles fans.”

“I won’t, but that sounded pretty scary. You’re a tough guy,” Obama said.

We were unable to locate any video of President Obama's "knife to a gun fight" remarks, but the comments were well documented in contemporaneous news reports.