Is Breyers Labeled 'Frozen Dessert' in Canada, Not Ice Cream?

Is something different about this classic dessert? 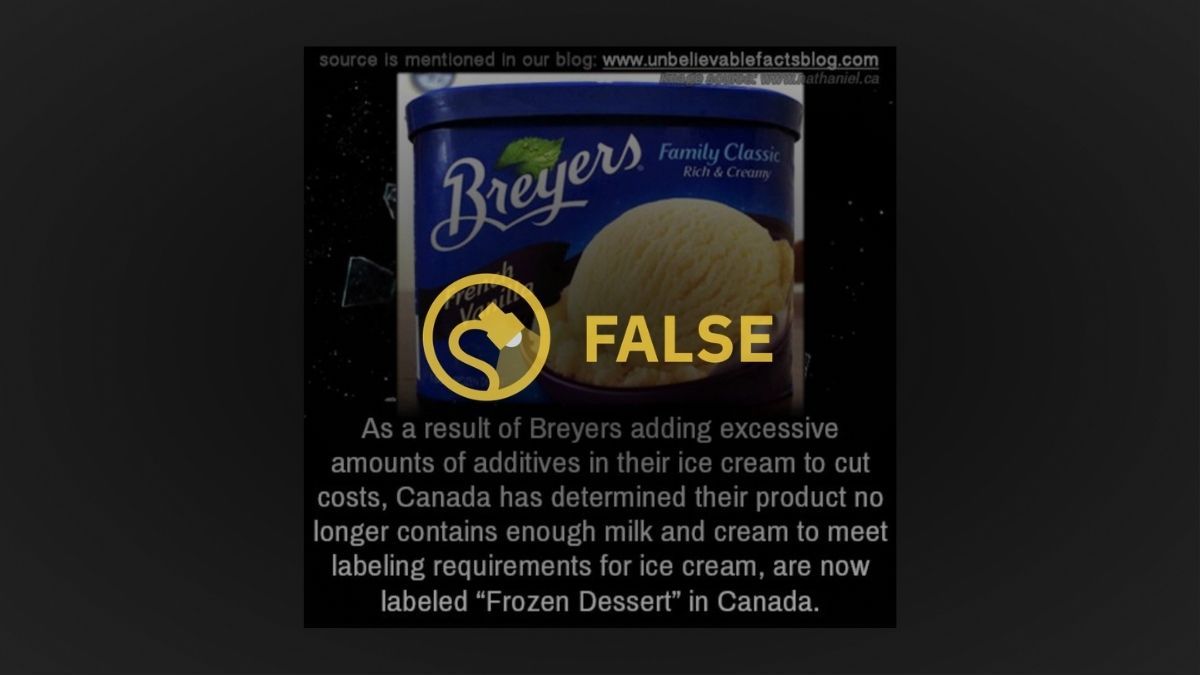 Claim:
As a result of adding excessive additives, Breyers now labels its ice cream as “Frozen Dessert” in Canada because the product no longer contains enough milk and cream to meet labeling requirements for “ice cream” in the country.
Rating:

Would ice cream taste as sweet by any other name? Maybe not if you believed an "unbelievable facts" meme circulating in June 2021 that claimed Breyers could no longer use the ice cream descriptor, at least in Canada.

Submitted to us by our readers, the meme read: “As a result of Breyers adding excessive amounts of additives in their ice cream to cut costs, Canada has determined their product no longer contains enough milk and cream to meet labeling requirements for ice cream.” The meme added that Breyers was now being labeled “Frozen Dessert” in the country.

We looked into whether or not Breyers in Canada is only labeled as “frozen dessert” and found that was not the case. According to a customer service representative we spoke to at Breyers, it is being sold as both ice cream and as frozen dessert, the products just belong to different categories.

Indeed, Breyers’ Canadian website confirms this. Vanilla flavor is still being sold as “Real French Vanilla ice cream,” while other flavors continue to be advertised as “Classic Ice Cream.”

Walmart in Canada is also still selling Breyers with the "ice cream" label. Breyers has numerous categories of products and flavors and explains the distinction in a Frequently Asked Questions (FAQs) page on its Canadian website, where a “Frozen Dairy Dessert” is described as follows:

Frozen Dairy Dessert products are made with many of the same high-quality ingredients that are commonly found in Ice Cream – like fresh milk, cream and sugar – and offer a great taste and even smoother texture. According to Canadian regulations, in order for a product to be labeled ice cream, it needs to meet the standard which includes being;

Anything that does not meet both of those requirements is not considered ice cream.

Breyers claims a number of differences between ice cream and Frozen Desserts, including “Frozen Dairy Dessert tends to have less fat than ice cream” and ice cream and frozen desserts are packaged differently. But the difference between frozen dessert and ice cream doesn't seem to indicate anything untoward is going on. Breyers' FAQs also discuss the difference in packaging between the two: “These products follow all Legal & Regulatory requirements for packaging, and thus claim Frozen Dairy Dessert on the front of the pack. Additionally, the ingredient list and nutritional information is updated to reflect changes.”

Given that Breyers in Canada is selling both ice cream and frozen dairy desserts as per its website and has not been prevented by the Canadian government from labeling desserts as ice cream, we rate this claim as “False.”