Did Obama Have Journalist Brenda Lee Forcibly Removed from Air Force One?

Barack Obama has possibly set a record for being the target of the most false political equivalencies. 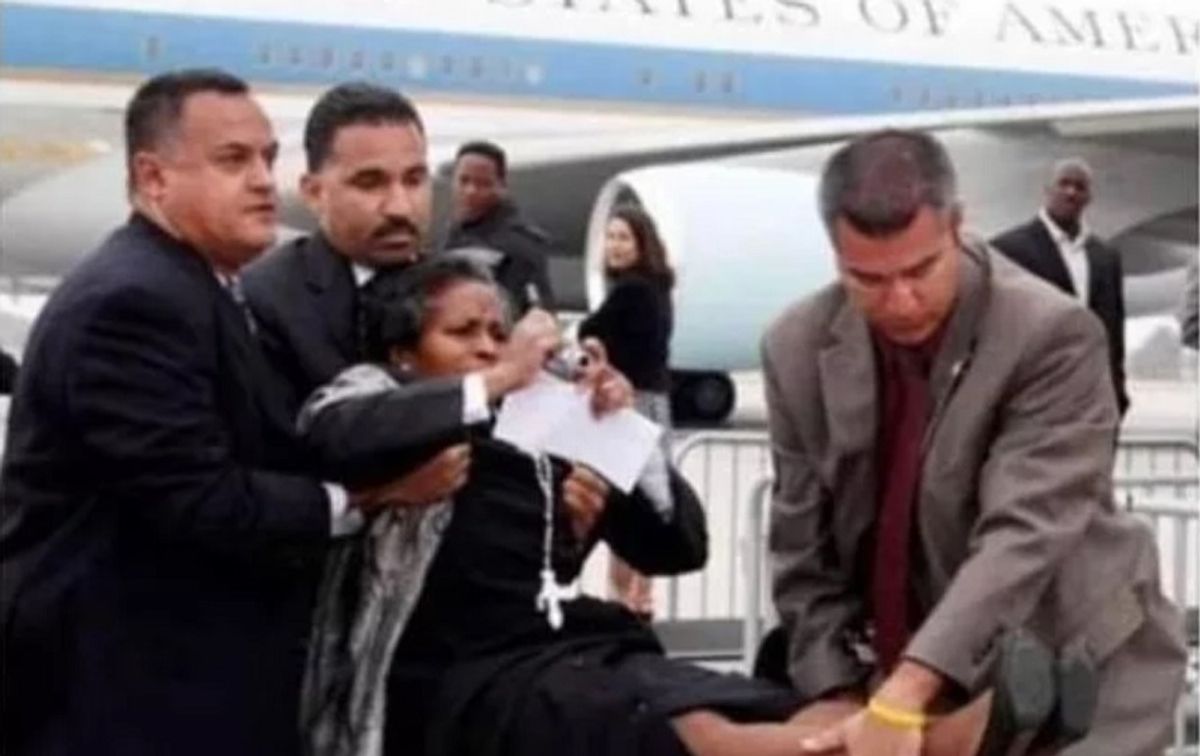 Claim:
Brenda Lee was forcibly removed from Air Force One by order of President Obama due to her pro-life views.
Rating:

As President Trump and his administration were criticized in November 2018 for their controversial decision to suspend CNN reporter Jim Acosta's press credentials, a number of Trump's defenders engaged in a round of whataboutism and claimed that President Obama had treated the media in a similar (or worse) fashion. The following image, for instance, was shared with the claim that it depicted a reporter named Brenda Lee being forcibly removed from Air Force One by order of President Obama due to her pro-life beliefs:

Remember this during Obama's criminal administration? This is Brenda Lee, a journalist from the Georgia Informer being physically removed from Air Force One in 2009 by Obama's order. She didn't grab anyone like Jim Acosta did. Brenda was removed for being pro-life. Brenda permanently lost her WH press credentials. Although the photograph was genuine, the accompanying caption contained multiple factual errors:

This photograph was taken on 28 May 2009 at Los Angeles International Airport and captured Brenda Lee, a self-proclaimed Catholic priestess and columnist for the Georgia Informer, being removed from an area near Air Force One by airport security. NBC Los Angeles reported at the time that Lee was trying to get a letter to President Obama about gay marriage but refused to cooperate with the security detail or a White House staffer who offered to take the letter to Obama. She was eventually removed from the press area by security while President Obama was elsewhere:

A reporter for a small newspaper was forcibly removed from a press area near Air Force One shortly before President Barack Obama arrived at Los Angeles International Airport to depart California.

Airport security officers carried the woman away by the feet and arms as she protested her removal.

She later identified herself as Brenda Lee, a writer for the Georgia Informer in Macon and said she has White House press credentials. The newspaper's Web site says it is a monthly publication, and a Brenda Lee column is posted on it.

Lee told the Orange County Register in an interview that she believed that she was being discriminated against because she was a priestess (Father Paul Gins of her parish denied that Lee was an actual priestess) and suggested that the White House staffer who had her removed from the press area was homosexual and had her removed because he objected to the content of her letter:

At LAX, Lee asked a Secret Service agent to take her letter to President Obama after learning that the president wasn’t scheduled to take any questions at the appearance.

The staffer came and asked to see the letter. “He said his name was Worly but I doubt that was his real name,” Lee said.

After “Worly” gave Lee the letter back, another staffer asked to see it, Lee said. Lee said that she’d rather give it to Obama herself when he walked by.

When Lee refused to surrender the letter, the man had security remove her, Lee said.

Lee said she yelled at reporters for not sticking up for her, saying “... you did nothing. What kind of reporting is this?”

Lee said she thinks she was being discriminated against for being a priestess, and that a priest wouldn’t have received the same treatment.

She said she was discriminated against because her stand for traditional marriage offended the staffer.

“The person who came to get the letter was, in my opinion, gay,” Lee said. That’s why he acted that way, she said, because, “why would a person jeopardize his job for craziness.”

Outside the terminal, a police officer chided Lee for making a scene, she said.

“‘This could’ve been much worse,'” she said the officer told her. “We could have cuffed you, put you in a black-and-white, and held you for 72 hours.'”

Lee was questioned after the incident by police and then released.

Here's a video report from the Associated Press about the incident:

This is at least the second time that internet trolls have used out-of-context images to claim that President Obama mistreated the media. A video of Obama's calling for a heckling protester to be removed from a White House event was shared as if it depicted him having a reporter thrown out for asking an unfair question at a press conference.