Was Bread Once Used To Erase Pencil Marks?

At least our modern-day erasers never get stale. 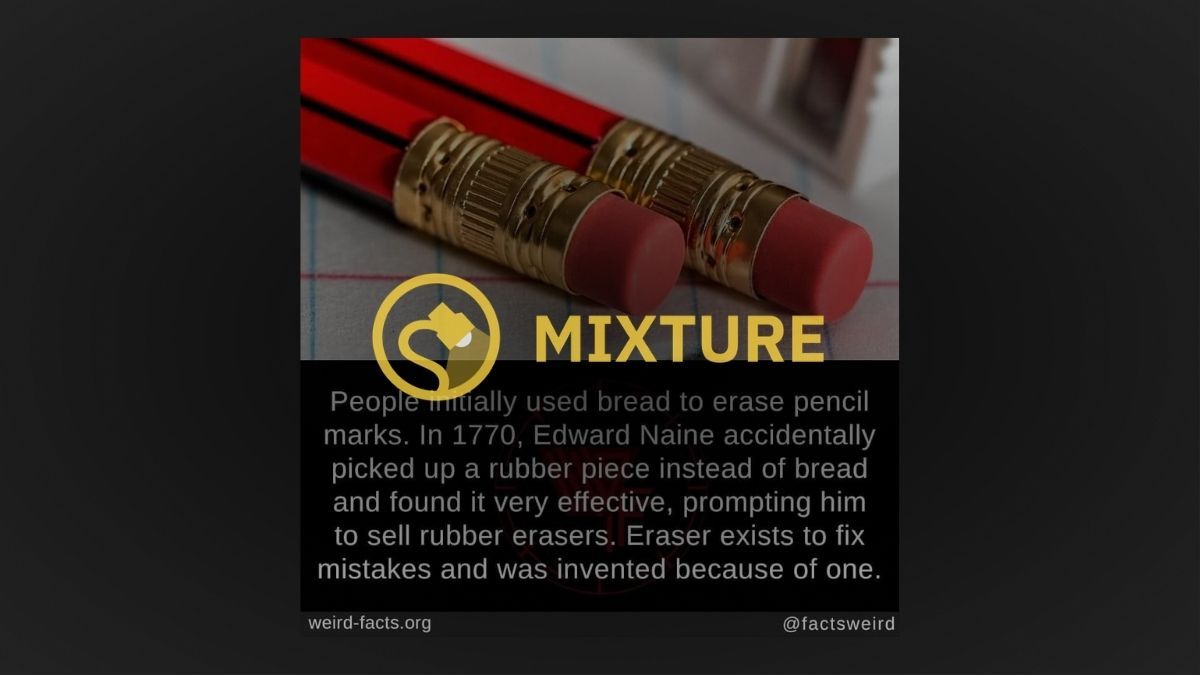 Claim:
People initially used bread to erase pencil marks until 1770, when Edward Nairne accidentally picked up a piece of rubber instead of bread to erase some marks.
Rating:

Before the discovery of the eraser, people did use bread and bread crumbs to erase pencil marks. Edward Nairne is credited with popularizing the use of rubber, which by his own account, was quite accidental.

Here is some history behind the pencil eraser you never knew you kneaded.

Snopes readers shared a meme with us that claims to highlight the history of erasers. The meme says that many people used bread or bread crumbs to erase pencil markings up through much of the 18th century. It also claims that the rubber eraser was accidentally developed by Edward Nairne in 1770, when he “picked up a rubber piece instead of bread and found it very effective.” The claim is partly true. A New Yorker story from 2012 describes how, “Before rubber, the material most suited for erasing pencil marks was bread crumbs.” This claim is echoed by Reader’s Digest, which said, “Before erasers became a stock pencil accessory in 1858, you might not be surprised to see a writer carrying around a stale baguette with his papers and gear. That’s because breadcrumbs were the writing world’s most popular erasers from 1612 to 1770.”

In chapter 3 of the book, “The Pencil: A History of Design and Circumstance,” by Henry Petroski, the author describes how ancient engineers who designed the stylus and adapted lead for writing and drawing would have justified this usage:

Thus the ancient stylus engineer could reply to the ancient stylus user that the mark could not without expense be made darker (unless one wanted to use crumbly charcoal) because no better pencil material than pure metallic lead was known. And perhaps in an attempt to excuse himself for the material’s flaw, the engineer might remind the critics of lead of the advantage that its mark could be erased with bread crumbs.

A 1908 issue of The Camera magazine also described bread as a useful erasing or lightening tool on negatives:

If more of the blacklead is required to be removed than can be got off with the friction of a clean piece of the wash-leather, recourse must be had to either quite soft india-rubber or to a piece of bread crumb [...] Somewhat new bread may be used, a small piece of crumb about the size of a walnut being kneaded between the thumb and fingers until it is rendered like dough, and this may then be used in the same way as a piece of rubber.

One account describes how the popular use of rubber as an effective eraser did indeed emerge from an accident by Edward Nairne in England. In the book, “Bizarre England: Discover the Country’s Secrets and Surprises,” by David Long, an entry about the invention of the eraser says: “Optician Edward Nairne reached for breadcrumbs — used throughout the eighteenth century to rub out pencil marks — but picked up a piece of rubber by mistake and found it worked rather better.”

But others appeared to have come upon this discovery first. According to the "Trade Promotion Series" from the U.S. Department of Commerce, in the first half of the eighteenth century, two French scientists reported the existence of rubber to the French Academy, as they traveled through South America and observed its use by the native population there. These French men gave the rubber the name “caoutchouc” and one of them, Francois Fresneau, wrote a report on its commercial importance in 1751. Meanwhile, in 1770, English chemist Joseph Priestley invited attention to “a substance excellently adapted to the purpose of wiping from paper the marks of a black lead pencil.”

While Priestley may have discovered rubber's erasing properties, Nairne is credited with developing and marketing the first rubber eraser in Europe, and by his own account, came upon this realization accidentally. Given that bread was indeed used by many people before these innovations, we thus rate this claim as a “Mixture” of truth.