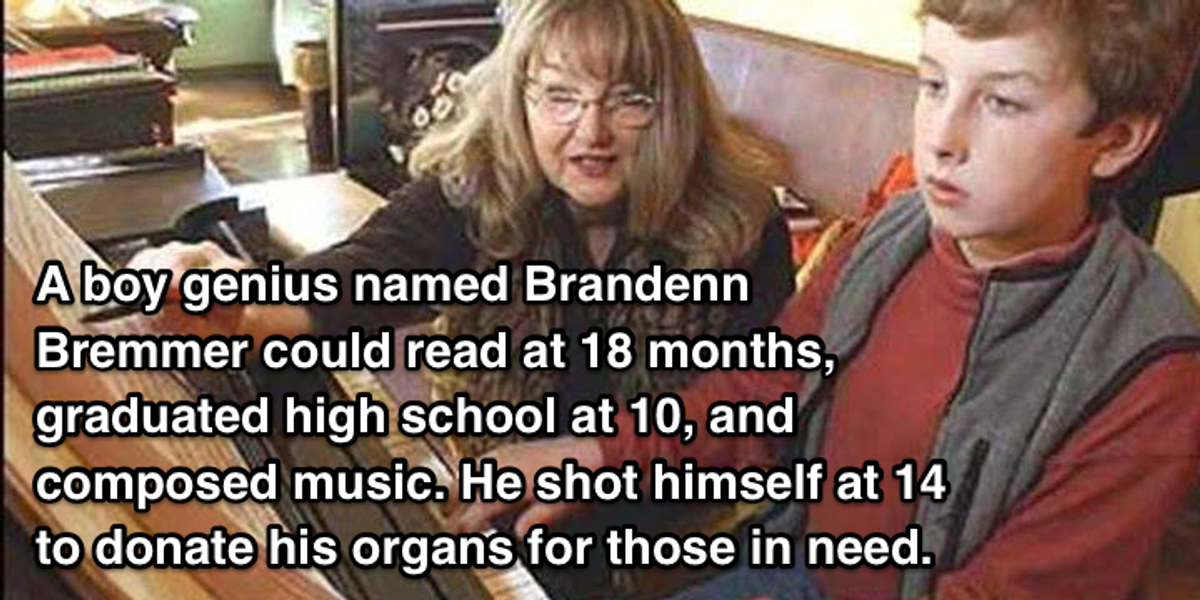 Claim:
Young prodigy Brandenn Bremmer achieved a number of successes before taking his own life at age14 so that he could donate his organs to others.
Rating:

Brandenn Bremmer was a child prodigy who died by his own hand at the age of 14.

Brandenn didn't indicate he staged his suicide to ensure his organs would go to others in need.

On 14 July 2016, the Facebook page "Creepy Nouns" published an image about the life and death of Brandenn Bremmer, asserting that the boy was a prodigy who took his own life solely so he could donate his organs to others in need:

The claim was disturbing, suggesting that Bremmer made one of life's most horrifying decisions for an unusual and selfless reason: so that others could live. Moreover, his tragic altruism occurred when he was just 14, well before he had a chance to truly put his myriad talents to use.

That the precocious Brandenn Bremmer lived and died is not in question: the New York Times profiled his life and sad demise in 2005:

At 18 months old, Brandenn E. Bremmer began to read, his mother says. At 3, he played the piano, finished the schoolwork of an average first grader and announced that he did not care to go back to preschool. At 10, he graduated from high school, his precocious accomplishments drawing the spotlight of the national news media.

This week, at 14, Brandenn died. Sheriff's deputies in his rural Nebraska hometown near the Colorado border said the gunshot wound to his head was apparently a suicide.

Noting that "Brandenn's life" held "enormous promise, like that of a handful of other child prodigies in the United States," the paper reported that Brandenn was euthymic and actively planning for his future when he unexpectedly killed himself and that he left behind "no note" nor any indication why he chose to shoot himself. In addition, his mother told the Times that Brandenn was "never depressed" and outwardly planning a career as an anesthesiologist (an undertaking involving several years of study).

Brandenn's mother, Patti, who found him shot when she and her husband, Martin, returned home from grocery shopping, said that Brandenn, who started college at 11, had been different, to be sure. But he had never been depressed, lonely or pressured to achieve.

"So many people will want to say he was maladjusted or not socially adjusted, but that's just not so at all," Ms. Bremmer said in a telephone interview. "It makes me mad. People need to understand. These kids are so much more intelligent than they are.

"We never pushed Brandenn. He made his own choices. He taught himself to read. If anything, we tried to hold him back a little."

Brandenn left no note, no goodbye. He had seemed cheery earlier in the day, before she left for the store, Ms. Bremmer said. She said he was busy with preparations to become an anesthesiologist, with his friends and with plans for the imminent release of a second CD of music he had composed, in the style, somewhat, of Yanni.

However, the paper went on to quote Ms. Bremmer's off-the-cuff inference in the immediate wake of Brandenn's death:

Ms. Bremmer, who writes mystery books and whose family raises and trains dogs, said she took comfort in her sense that Brandenn must have chosen his course because his organs — heart, liver and kidneys — were needed by ailing people.

"He was so in touch with the spiritual world," Ms. Bremmer said. "He was always that way, and we believe he could hear people's needs. He left to save those people."

The vital organs were donated the night he died, as he had long made clear was his wish, she said.

Ms. Bremmer didn't specify why she believed her son's suicide was expressly for the purpose of organ donation, merely that the thought was one that brought her comfort in what was undoubtedly the darkest time in her life. However, even Brandenn's mother didn't say he did kill himself to donate his organs, merely that she speculated that may have been the case. (And her remarks might have been addressing the manner in which Brandenn took his life, which preserved the vital organs most commonly used in transplantation, rather than the reason he took his life.)

While Brandenn's mother arguably knew him better than anyone, her comments were clearly made in a fog of grief just days after she discovered her son's body. Quite possibly she was not thinking clearly in the immediate aftermath of her child's tragic death.

A 2006 New Yorker profile of Brandenn shed no further light on why the boy opted to end his life, but it did provide a broader picture of his state of mind. In that article [PDF], Brandenn's parents discussed his plans for the immediate and distant future:

His suicide was a mystery to them. They had searched the house for clues, and found nothing. He had left no note, and they hadn't seen any warning signs. "Brandenn wasn't depressed," Patti said. "He was a happy, upbeat person. There weren't sudden changes in his behavior." Neither recalled him being particularly upset about anything in the preceding months. He hadn't suffered a breakup, or endured a personal rejection. He hadn't been giving away prized possessions. In fact, Patti said, he'd just added to what he called his "unfinished list": he was selling some old Nintendo games on eBay in order to buy a PlayStation 2 console. And they'd ruled out the possibility of an accident. "Brandenn knew way too much about guns for that," Martin said.

Although Brandenn's parents felt assured he was never "depressed," the scant group of peers with whom he was able to interact provided a different perspective to the magazine. A teen girl identified only as "K.," a girlfriend, shared correspondence between the two around Christmas 2004:

K. wrote to ask how Brandenn's Christmas had been. She said that she and her parents had spent the day at the movies. A couple of hours later, Brandenn responded that, aside from watching "Shrek 2," the Bremmers had done "nothing, as a family anyway." He explained in another email, "Yeah, that's kind of what it's like here, I mean, we're a close family ... we just don't spend much ... time ... being ... that ... way ... Yeah."

In the middle of their exchange, a gift for Brandenn arrived in the Bremmers' mailbox. It was the scarf that K. had knitted, in marled gray alpaca, with suede fringes. He wrote to thank her: Your timing couldn't have been better, for the past week or so I've been depressed beyond all reason, so this was just what I needed, thank you very much.

Now, what's this about you being depressed all week? Talk to me, I want to hear about it. Because trust me, I've been there, done that and all I got was this lame t-shirt. ;) Just let me know okay? I want to help if I can, and it's really important to me that you're happy and all that jazz.

Thanks . . . I'm glad there's someone who cares. I don't know why I'm so depressed, before it was just every now and then, and you know, it was just "bummed out" depressed. But now it's constant and it's just, "What's the point of living anymore?" I don't know, maybe I just don't spend enough time around good friends like you. But like I can. Not out there in the middle of nowhere. At least there's this family kind of near by that aren't "Cowboys," or else just plain idiots, that I can spend time with. But even still, that's only like once every other week at th most. Oh well. Well I should probably go, thanks for being such a good friend.

Brandenn and K. then fell out of touch for benign reasons, and in March 2005, the Bremmers came home from the store to find Brandenn clinging to life after he'd shot himself. In the New Yorker profile, Brandenn's mother revisited her statement that he had killed himself solely to donate his organs:

After the suicide sank in, Patti says, she became taken with the idea that perhaps he'd actually killed himself so that his organs could be put to use in those who needed them.

"Brandenn was so spiritually aware that if he sensed that people needed his help he would have helped," she told me once.

"So you're saying he had the ability to sense that people needed something from him and that's why he did what he did?" Martin put in, elaborating on the thought.

"Yes," Patti said. "I'm ambivalent about Christianity, but a lot of people have said he reminded them of Jesus. You know: 'He came, he taught, he left.'"

Hilton Silverman, who had been in the kitchen, brought a platter of Reuben sandwiches to the table. Hilton has a gray beard, a wrestler's posture, and a heavily lined forehead. He wore fleece pants, a zippered skiing turtleneck, and flip-flops with socks.

"Well, I can tell you what the spirits are saying," he said. "He was an angel."

Silverman turned to face me. "I'm not sure how much you know about my husband. Hilton is a psychic and a healer. He has cured people of cancer."

"It kind of runs in my family: my grandfather was a kabbalist rabbi in Brooklyn, and my father used to heal sick babies with kosher salt," Hilton said. "Brandenn was an angel who came down to experience the physical realm for a short period of time."

I asked Hilton how he knew this. He paused, and for a moment I wondered if he was pulling my leg and trying to think up something even more outlandish to say next. "I'm talking to him right now," he said. "He's become a teacher. He says right now he's actually being taught how to help these people who experience suicides for much messier reasons. Before Brandenn was born, this was planned. And he did it the way he did so that others would have use for his body. Everything worked out in the end."

"I'll tell you who else is an angel," Linda Silverman said. "I think Martin's an angel."

"Oh, Martin, for sure," Hilton said. "He has a positive spiritual alignment. He and Brandenn meet a lot when he's asleep."

Linda looked at me helpfully. "You see, we don't know how to explain these kids — not scientifically."

Silverman seemed to hold fast to her interpretation of events, even after she saw the unhappy email messages that Brandenn had written. She doubted they were representative, and suspected that they'd been taken out of context, or even manipulated.

Patti Bremmer, like Silverman, described Brandenn as an "indigo child" and informed correspondents on an e-mail list for parents of gifted children that several of her son's organs were apportioned in a somewhat miraculous fashion to the dying. But his friends and siblings told the magazine they "agreed that he had probably felt alone or sad or frustrated or some combination of those things, and was momentarily helpless to find a way out," adding that "unfortunately, he had been in a position to act on a suicidal impulse."

The only record of the reasons behind Brandenn's state of mind remain in e-mails exchanged with far-flung peers, during which a state of depression (and not a grand sacrifice) was the only revealing factor mentioned by the teenager before his suicide.