Did a Brain-Eating Amoeba Kill a Woman Who Rinsed Her Sinuses with Tap Water?

Balamuthia mandrillaris infections are extremely rare and largely preventable, but the few cases that do occur are usually fatal. 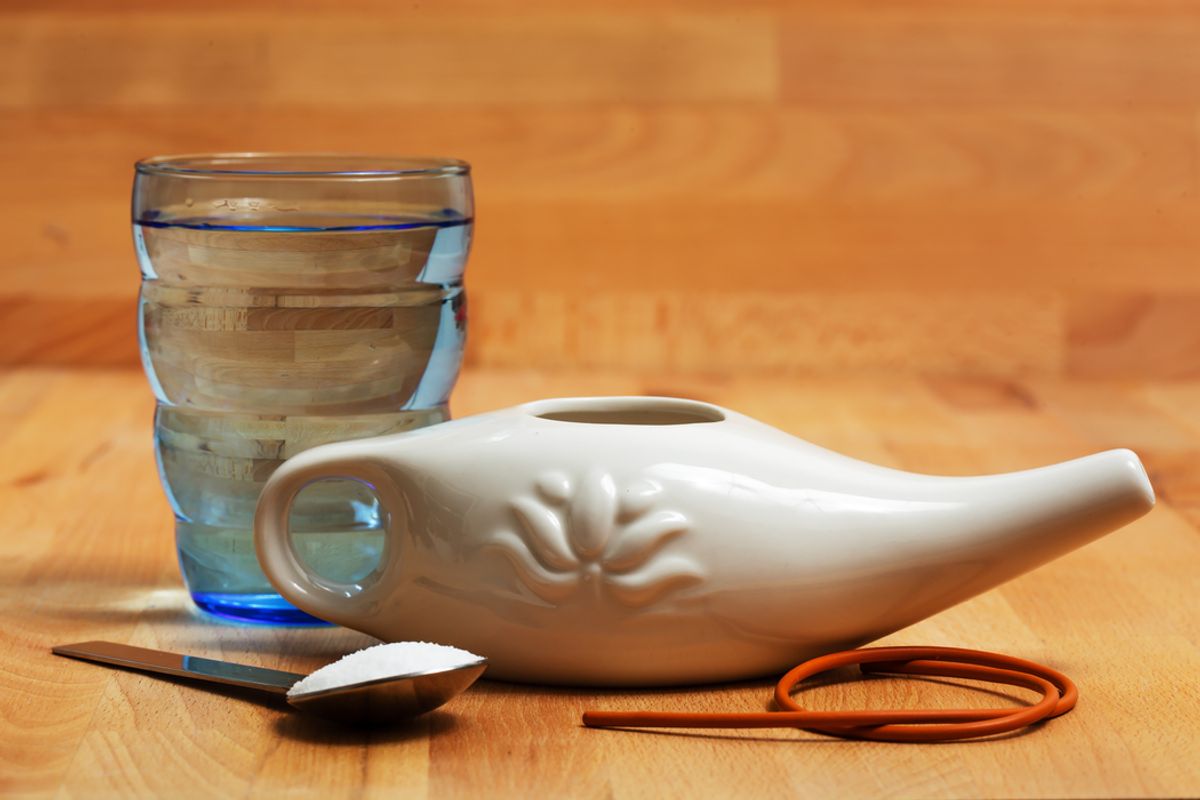 On 5 December 2018, the Seattle Times published an article whose terrifying headline ensured its own virality: “Rare brain-eating amoebas killed Seattle woman who rinsed her sinuses with tap water. Doctor warns this could happen again.”

Sadly for those who visited this page hoping to find that the reporting was exaggerated or made-up, this really happened. Though her anonymity was maintained, the story of a 69-year-old Seattle woman who used tap water in her Neti pot for over a year and then died from a Balamuthia mandrillaris brain infection was documented in a 20 September 2018 case study published in the International Journal of Infectious Diseases:

We report the case of a 69-year-old female who presented with a chronic nasal skin rash, new onset focal seizure, and a cerebral ring-enhancing lesion after a year of improper nasal irrigation. Despite aggressive and novel anti-amoebic treatment, she died as a result of a Balamuthia mandrillaris brain infection.

One year before developing the brain infection, the authors reported, the woman developed a chronic sinus infection whose symptoms were not relieved by medication. She turned to using a Neti pot to rinse her sinuses, but instead of using sterile or saline water as directed, she used tap water filtered with a Brita system. After a month of this practice, and without any relief of her sinus symptoms, “she developed a quarter-sized, red raised rash on the right side of the bridge of her nose and raw red skin at the nasal opening.” Though several misdiagnoses followed, no doctor correctly recognized the rash as a symptom of an amoebic infection.

The report stated that a year after that initial rash developed, the woman developed a seizure that required hospitalization. At that time, the doctors identified a lesion on the right side of the brain which they decided to biopsy. Some 19 days later, after a continued decline in the patient's health, scientists from Johns Hopkins University suggested the possibility that the cause of her malady was an amoebic infection, and the Centers for Disease Control rushed a novel drug for her treatment. Unfortunately, they were unable to halt the progression of the disease, and the patient's family made the decision to remove her from life support.

An autopsy determined the cause of death to be Granulomatous Amebic Encephalitis (GAE), which the CDC defines as “a serious infection of the brain and spinal cord that typically occurs in persons with a compromised immune system.” In this case, the causative agent was an extremely rare amoeba named Balamuthia mandrillaris, one of three forms of amoeba known to be capable of infecting and consuming the human brain.

What is Balamuthia mandrillaris?

Amoebas are a broad group of taxonomically mixed unicellular organisms that consume surrounding cellular material through absorption, and that express an ability to take on a variety of shapes. Several different species are associated with disease, most notably Naegleria fowleri, commonly known as the “brain-eating amoeba” that can cause a different kind of brain infection called primary amebic meningoencephalitis (PAM).

Balamuthia mandrillaris was discovered in 1986 in the brain of a mandrill monkey during an autopsy at the San Diego Zoo and is now recognized to be a cause of GAE in both humans, several primates, and other animals, with an estimated 200 cases of human infection ever documented. The amoebae are ubiquitous in soil and groundwater although their presence is not expected in city-treated water, according to Liz Coleman, a spokeswoman for the Environmental Public Health division of Washington State’s Department of Health, quoted in the Seattle Times’ reporting.

Merely ingesting the thing will not lead to health problems, but in rare cases (usually instances involving people with weakened immune systems, or those who are young or old), the organisms can infect a host through skin breakage or via the respiratory system. If they infect the central nervous system, they “ingest bits and pieces of host tissue [and produce] enzymes that degrade the tissue.”

Is the Neti Pot to Blame?

Nasal irrigation involves rinsing one's sinus cavity with distilled or sterile water (or water that has been filtered to remove potentially infectious organisms), and one such method of water delivery is a Neti pot. The need for sterility is explicitly stated due to the (extremely small) risk posed by another amoeba, Naegleria fowleri, and it is the reason the FDA requires (in the absence of sterile water) a specific kind of filter capable of removing the amoeba and similarly-sized organisms from water before it is pushed through fragile sinus tissue.

While the authors of this case report could not state with absolute certainty that the Neti pot was to blame, it is far and away the most likely explanation given the fact that the patient had been rinsing her sinuses with tap water regularly for an extended period of time:

While it is recommended that only sterile water or saline be used ... the patient used tap water that was filtered with a Brita Water Purifier ... Improper nasal irrigation has been reported as a method of infection for the comparably insidious amoeba, N. fowleri. This precedent led us to suspect the same route of entry for the Balamuthia amoeba in our case. Although this hypothesis is consistent with the patient’s history and ultimate diagnosis, the water supply to the patient’s home was not tested, hence our ability to definitively trace the patient’s infection to improper nasal lavage is limited.

Other routes of exposure are possible, according to a 2013 review of amoebic infections:

Epidemiology of Balamuthia GAE is not well understood. However, based on several case reports it can be hypothesized that gardening, playing with dirt, or exposure to dust while motorcycling may play significant roles in the acquisition of Balamuthia infection. It has been shown that Balamuthia is found in the soil and dust in air and the route of infection is probably via inhalation of Balamuthia either present in soil or carried by the wind or the amebae entering the body through a cut or puncture. Once it gains entry into the body it is likely to spread hematogenously to the brain. Additionally, there is some indication that water may serve as a vehicle for acquiring the infection.

Although the water used in the Neti pot likely caused this infection, Dr. Cynthia Maree, a co-author of the report and a member of the team that treated the woman in question, told the Seattle Times that “the risk of infection to the brain is extremely low,” adding that “people who use neti pots or other nasal-irrigation devices can nearly eliminate [that risk] by following directions printed on the devices, including using only saline or sterilized water.”

While most Balamuthia GAE cases end in death, people have survived this kind of infection. “Several patients” have recovered after treatment with a combination of powerful antimicrobial drugs, according to the 2013 review. This was the second reported case of a Balamuthia infection in Seattle, according to the Times -- the first case was reported in 2013, and that patient survived.

Rideout, B. A. et al.   "Fatal Infections with Balamuthia mandrillaris (a Free-living Amoeba) in Gorillas and Other Old World Primates.”     Veterinary Pathology.   1 January 1997.