Romantic Encounter with a Necrophiliac

A girl's unusual medical condition supposedly led to the discovery that the boy she'd been intimate with had been having sex with corpses. 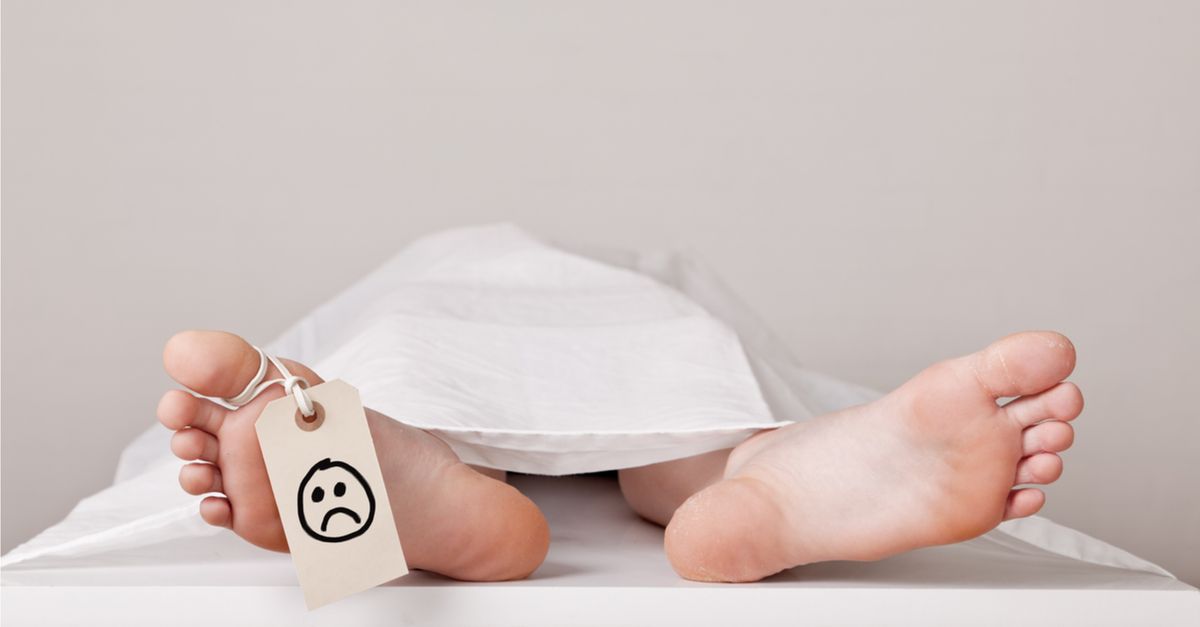 Claim:
A girl's unusual medical condition led to the discovery that the boy she'd been intimate with had been having sex with (or eating) corpses.
Rating:

In June 2010, the Malta Independent reported on a gruesome tale which had recently been sweeping that island:

Media reports about sexual intercourse with corpses in the Mater Dei mortuary were denied and condemned by Mater Dei Hospital management.

Favourite News had reported that a former worker at the Mater Dei mortuary had had sexual intercourse with corpses and, as a result, a woman who had had a sexual relationship with him had suffered from a sexually transmitted disease.

The story, which is also doing the rounds on some social networking sites on the internet, said that the woman had been hospitalised in a serious condition.

Mater Dei Hospital management said in a statement that the story was unfounded.

"Mater Dei Hospital Management denies all these facts and condemns the circulation of such unfounded morbid news which is causing great pressure on the staff who work in the Hospital Mortuary," it said.

This salacious mortuary rumor was just another iteration of a years-old urban legend, one which we originally wrote about back in 2001 and has been expressed in many forms:

A girl has just started having sex with her ex-partner again. After a few days she starts feeling itchy in her privates. Se goes to the doctor's thinking she must of caught a sd off her ex. The doctor examines her and tells her he will have to phone the police. She is in shock and asks why. The doctor replies that she has maggots inside her vagina and the only way that can happen is if she or her partner is having sex with dead people too which she replies her ex works in the morgue.

A friend of mine essentially told me the following story. He says he knows a girl whose sister is a real slut. She's at a party and meets a guy, and winds up giving the guy a blowjob. They part ways. Two days later, she's developed a rash around her mouth. She goes to the doctor and he takes some samples and tells her to find the guy. She goes back to the house where the party took place, and the guy who lives there tells her her boy's at work, and gives her the address. When she gets there she sees he works at a funeral parlor, but there's a big funeral going on, so she decides she'll contct him later. That night she gets a call from her doctor. He tells her that the rash is caused by a kind of louse that is most commonly found in the bodies of the recently deceased. When she goes to confront the necrophiliac the next day, she is told that he has died of an untreatable parasitic infection.

A young girl from central London went to visit her doctor regarding a genital rash. The doctors were unsure of the cause so took routine swabs and blood samples for testing. She was recalled the following week and asked to repeat the tests. She was concerned that the doctors had become increasingly coy about the whole mater and that she was asked not to talk to anyone else about it.

She was later stunned when the police arrived on her doorstep asking questions regarding her sex life.

It turns out that a bacteria has been found that only occurs on dead bodies. It was later discovered that her boyfriend, who worked at the local underatakers had been "overly-friendly" with his "customers" and passed the infection onto her. Her boyfriend was subsequently jailed.

Every society has its taboos, and engaging in sexual acts with the dead is one of our big ones. It seems only fitting that disgusting acts should carry their own penalty, something that repays the perpetrator for his perfidy. The notion of such contacts leaving the deviant's genitals crawling with maggots satisfies our urge to see justice in kind.

Yet this legend is an expression of misdirected retribution because it is the necrophiliac's next living partner who ends up with the infestation. Sexual juvenilia is rife with tales of icky punishments visited upon those who engage in kinky practices, but this particular legend stands out because the one suffers the consequence is the innocent party. Unlike the girl in the "Mayo Clinic" legend, whose creative use of tuna during oral sex results in a vaginal infestation of maggots, the young lady in this story pays a horrifying price for her partner's misdeeds, not her own. Her boyfriend's disgusting secret comes to light in an awful fashion: The gal is left not only with horrifying knowledge of someone she previously trusted, but with the tangible (and wriggling) mementos of his act.

Could such a scenario play out in real life? No. Despite what some versions of this legend would have you believe, there is no special "corpse worm" whose presence on the living would immediately announce close contact with the dead. That flourish is part of the legend because through it the disillusioned girlfriend comes to find out what her boyfriend has been up to. Without this contrived plot device, she would not otherwise discover his indulgence in necrophilia.

The "worms" we associate with death aren't worms at all; they're ordinary maggots, which themselves are the larvae of flies. (Earthworms are entirely innocent of the rap that's been hung on them; they have little interest in dead bodies even though what could have been their dinner is delivered to them through our practice of burying the dead.) Flies are attracted to the smell of decomposition, and after feasting herself, Mama Fly will happily lay her eggs on any fine food sources she encounters to give her young ones the best possible start in the world. Those eggs hatch out as maggots and immediately set to doing what all young ones do, which is eat. Hence, corpses wriggling with "worms."

Though we associate worms with corpses (thanks, in part, to macabre schoolchild chants featuring lines such as "The worms crawl in, the worms crawl out ..."), deceased humans do not magically erupt with such critters; they have to come into contact with a pregnant fly. There are few opportunities for this in a morgue or the embalming room of a funeral home.

If the boyfriend had been having sex with the inhabitants of a morgue, he wouldn't have come into contact with maggots. The story also flunks the logic test both with his failure to notice his penis crawling with "worms" and with his (living) girlfriend's failure to notice anything amiss with his equipment.

Versions of this legend that circulated in April 2009 were set in typical Spring Break locales (e.g., Jamaica, Florida) and changed the nature of the dark secret from necrophilia to cannibalism: Unsuspecting girls come down with puzzling medical conditions (e.g., fungi, lesions, sores) developed from having intimate contact with young men who don't merely have sex with corpses, but who actually eat them — the legend thereby intimating that these girls risked not just their health but their very lives through their injudicious flirting:

So this girl goes to Panama City, Florida for vacation. She meets a guy and the kiss. He then asks her if she wants to go on a date but she says no because she is going home soon. A couple weeks later she goes to the doctor because she has sores on her mouth and thinks it it a STD. The doctor says that it is not a STD. It is a bacterial infection caused from eating decaying flesh. The girl gives the doctor the guy's contact information. The doctor call the Florida Police and the police check the guy and he is eating two girls that he killed.

i have a story to tell you that i hope you will pass along, it happened to a girl that goes to Parkland...close to home!!!

So, 7 friends went to Jamaica and went to this same local club every night they were there. 1 of the girls kept making out with one of the locals every single night and every night he would ask her to come home with him. She refused every night and her last night there he gave her his name, number, and address and left the option open to her to come meet him at his house. Well, she never went... thankfully! She got back to the states and a few days later, she found red welts around her mouth, her chest, and neck and she didn't know what the heck it was. She went to the doc and he was surprised because he said he has NEVER seen "it", but only read about "it". He asked if she'd maybe kissed the locals and any other contact... she said yes. He asked if she had his contact info because the authorities need to be contacted IMMEDIATELY! She asked why? He said, because the local you were making contact with is a CANIBAL! WOW!! Turns out, the authorities raided his house and found 4 dead bodies of Jamaican
club-goers.

Isn't that creepy?! I had to tell you ladies so that you can pass it along, Amanda's close friend was on the trip to Jamaica with the young lady. CRAZY people are still real!!!

An intern's friend's friend said that she was in Panama City over spring break and made out with this guy at a local bar. They texted, he invited her back to his place repeatedly and she said no. When she got back to Michigan she developed a sore on her lip and went to the doctor who then called the FBI. The sore was a fungus that only occurs because of cannibalism. She then went to Florida with the FBI and they trapped the "cannibal" and found 3 dead bodies in his apartment.

here is a story going around locally (Cedar Falls, Iowa) about a teenage girl that went to Miami on Spring Break. She had a romantic encounter with a local man. Upon returning home she sought medical care for a rash or mark on the side of her face by her mouth. She was met by police when she received her test results stating there was an enzyme
found from her face site that is only left by cannibals. She gave the man's info. to the police. The man was investigated in Miami and and 2 dead bodies were found at this man's home.

If we divorce ourselves from the ickier aspects of this legend (which isn't easy with a story built around maggots, vaginal infestations, necrophilia, and cannibalism), we can see this as a cautionary tale about the dangers of incautious intimacy with those we don't know well, perhaps more broadly expressive of our misgivings about what even our long-term partners might be keeping hidden from us.

The Malta Independent.   "Necrophilia Story May Have Been Nothing More Than an Imported Urban Legend."     27 June 2010.