We tracked down the video that was originally shot in the Canary Islands in 2013. 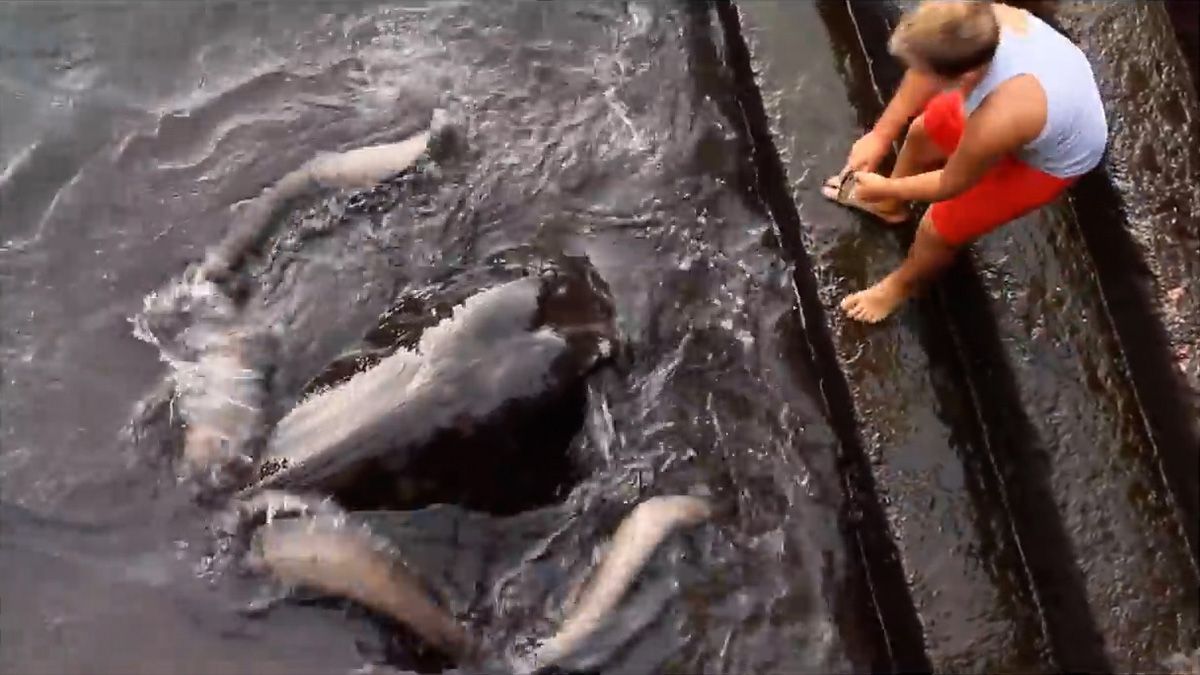 Claim:
A boy petted an unknown sea creature before realizing what it was and it "shocked everyone."
Rating:

The picture in the ad is real. It's a screenshot from a YouTube video from 2013 that was shot in the port of Vueltas in La Gomera, in Spain's Canary Islands. According to the video's caption, it showed a large manta ray or stingray approaching a boy named Joel. He and others seen in the video all appeared to be locals.

However, in the years after the video was posted to YouTube, online advertisements promoted a misleading version of the story. The ads led readers to slideshow articles that lasted 80 pages. These lengthy articles dramatized what really happened by mixing fact with fiction.

In early January 2022, online advertisements displayed a picture of a boy petting an interesting-looking sea creature. "Boy Pets Creature Before Realizing What It Is," one ad read. Another said: "Boy Pets Creature, Then Suddenly Realizes What He's Touching." We also found the same story being pushed as: "You’ll Never Guess The Sea Creature This Young Boy Befriended."

This ad and the 80-page article it led to were both misleading.

However, these ads were all misleading. According to Google's search suggestions, others who had seen the ads had looked to see if there was a Reddit thread that explained the "boy pets creature" claim. The reason: One of the ads led to an 80-page slideshow article. Clicking through 80 pages of content is not typically an enjoyable internet activity.

The headline of the long article read: "Boy Pets Something Unknown That Shocked Everyone." It claimed that the boy was on vacation and didn't initially realize what he was touching in the water. The article also named a resort the boy and his family were staying at and detailed their purported plans for the day. We found no evidence that any of this was true. This was all simply dramatized for the lengthy article.

In reality, the picture in the "boy pets creature" ad showed a boy named Joel with a large manta ray or stingray. It was a screenshot from a 2013 YouTube video that was shot in La Gomera, which is located in Spain's Canary Islands. The video's description provided some context behind the purported "boy pets creature" moment:

La Gomera 08.08.2013: In the port of Vueltas, Valle Gran Rey, stingrays, eagle rays, and butterfly rays sometimes come near the harbor. Vueltas is an old traditional port where fishing boats still sail at sea. Fish from the landing ladders are often used. They are sometimes accidentally captured near the entry of the port into the sea. This led to the animals foraging downfall time and time again. A little boy (Joel) has his fun of this and together with his friends he especially attracts a large stingray to the stairs and feeds it with fish. Slowly everything evolved into a small morning show.

While the translation from German to English didn't come through too well, the key details were clear. The setting was the port of Vueltas, Valle Gran Rey, in La Gomera. A boy named Joel and his friends appeared in the video. According to the caption, Joel fed what looked to be a large stingray, which was the moment seen in the ad. It's unclear if this was something the boys did often, but it appeared that this wasn't their first time visiting the sea creatures in the harbor. The steps where Joel stood with the boys might be the same stairs in the bottom-right corner of this photograph. (Courtesy: Westend61/Getty Images)

The YouTube video was credited to Henner Riemenschneider and Bilderwerkstatt Gekko-Vision in La Gomera.

In sum, the "boy pets creature" ads were misleading, but the picture was genuine. It was a screenshot from a video that showed a boy named Joel feeding what looked to be a stingray in La Gomera. For these reasons, we rated the claim as "Mixture." We recommend skipping the ads to head straight for the original video.