Did a Boy Find a WWII Tank Buried in Mud?

This story led us to Estonia and the year 2000. 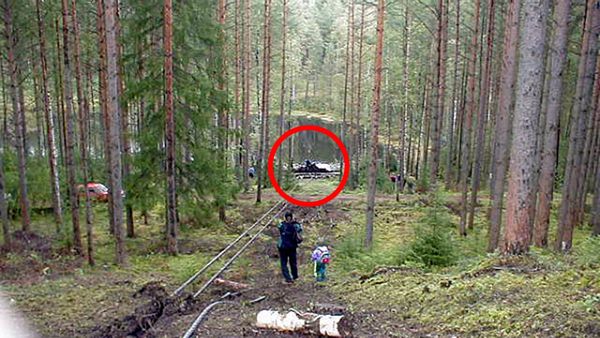 An ad claimed that a boy finds tank buried in mud and opens hatch and finds this in Estonia.

It's true that a boy's memories helped to locate a Soviet T-34/76 tank from World War II. It had been underwater in a lake in Estonia since 1944. According to the Otsing history club, in that same year, the boy noticed tank tracks near the water. Decades later, he told others of the memories. This led to the recovery of the vehicle on Sept. 14, 2000.

In November 2021, an online advertisement claimed: "Boy Finds Tank Buried In Mud, Opens Hatch And This." We clicked the ad. It led to a 35-page slideshow article on the Post Fun website that described a "Soviet-built T34/76" being found in Mätasjärv in the Kurtna Lake District in Estonia. The ad appeared to signal that the boy found something inside the tank.

A variation of the ad read slightly different: "Boy Finds Tank Buried In Mud, Opens Hatch And Realizes What Army Has Done."

In our quest to find out if this really happened, we first looked at an article that appeared to have been published around Sept. 14, 2000.

The Story of the Boy

The article reported that, in 1944, a boy noticed tank tracks leading into a lake and air bubbles rising to the surface for two months straight. According to the story, decades later he told the tale to others, so they decided to search the lake:

14 September 2000 - A Komatsu D375A-2 pulled an abandoned tank from its archival tomb under the bottom of a lake near Johvi, Estonia. The Soviet-built T-34/76A tank had been resting at the bottom of the lake for 56 years. According to its specifications, it’s a 27-tonne machine with a top speed of 53km/h.

From February to September 1944, heavy battles were fought in the narrow, 50 km-wide, Narva front in the north-eastern part of Estonia. Over 100,000 men were killed and 300,000 men were wounded there. During battles in the summer of 1944, the tank was captured from the Soviet army and used by the German army. (This is the reason that there are German markings painted on the tank’s exterior.) On 19 September 1944, German troops began an organized retreat along the Narva front. It is suspected that the tank was then purposefully driven into the lake, abandoning it when its captors left the area.

At that time, a local boy walking by the lake Kurtna Matasjarv noticed tank tracks [in the mud] leading into the lake, but not coming out anywhere. For two months he saw air bubbles emerging from the lake. This gave him reason to believe that there must be an armored vehicle at the lake's bottom. A few years ago, he told the story to the leader of the local war history club "Otsing". Together with other club members, Mr. Igor Shedunov initiated diving expeditions to the bottom of the lake about a year ago. At the depth of 7 metres they discovered the tank resting under a 3-metre layer of peat.

We were unable to find anything in newspaper archives or other traditional news sources to help us confirm the story. For example, englishrussia.com credited the same article to the "Komatsu Times." We were unable to find a history of this publication ever having existed. "Komatsu" was also purportedly the brand of equipment that was used to pull the tank out of the mud. We contacted a company spokesperson to ask questions and will update this story should we hear back.

Photographs were included with the article as well. The pictures showed a tank being unearthed from mud, just as the story about the boy mentioned: Workers prepare to pull the old tank out of the mud. (Credit: Photographer)

We also found the same photographs on Imgur and rense.com.

YouTube also hosts videos of the same tank from the pictures. In 2010, the Missing Military YouTube channel posted the following clip that showed the Sept. 14, 2000, date on top of the video:

A second video showed an alternate angle of the tank being pulled from the mud:

It also captured the moment that the tank was turned back on.

The lengthy slideshow article from Post Fun ended with the following line: "Now, the T-34 World War II tank is proudly displayed in a war museum in the Gorodenko village." We found multiple articles online that claimed the same thing about the tank and a museum.

We then found what might be the original source of the entire story.

The website diving.ee is the home of Otsing, the same history club that was previously mentioned in the article that we cited earlier. The website has a page dedicated to "the latest news about the tank." However, it appeared that it hadn't been updated since 2007.

On the Otsing history club's website, the original account of the story confirmed the story of the boy who noticed the tank tracks in 1944 and, decades later, told others of his memories. This did indeed lead to the recovery efforts of the Soviet tank on Sept. 14, 2000, as shown in the pictures and videos:

Shortly after the Germans had pulled out, a local boy walking by the lake noticed tank tracks [in the mud] leading into the water, but not emerging anywhere. For the next two months he saw air bubbles coming out of the water and he realised that there must be some sort of armoured vehicle lying on the bottom of the pond.

Over 50 years later, by now an old man, he recounted his memories of 1944 to Igor Sedunov, the leader of a local war history club named Otsing. Sedunov and his fellow-enthusiasts specialise in exploring the Narva battlefields and keeping the memory of the battles of 1944 alive. The club has two sections: one specialising in overland searches and one of trained scuba divers specialising in underwater explorations and recoveries. The latter section is led by Mihail Zenov.

Intrigued by what his witness had told him, Sedunov in 1999 hatched a plan to explore the bottom of the lake. Enlisting the help of the colleague divers of the Ikthiandr diving club, a systematic search of the lake was begun. Although there was no trace of any oil or lubricant floating on the water to betray the presence of a sunken vehicle below the surface, after several attempts the divers hit gold, discovering what was quickly identified as a Soviet T-34 tank. The vehicle was lying at seven metres depth and was covered by three metres of peat and silt. Excited by their find, and exhilarated by the prospect of obtaining what appeared to be a virtually undamaged original wartime tank, Sedunov and the other members of the club decided to recover the vehicle from the water.

The page also mentioned that "Lennart Meri, the President of Estonia, came to admire the historic vehicle" days after it was pulled from the lake. It even included information that might be the most recent details of the tank's whereabouts:

Ever since it had been pulled from the lake, the intention had been to display the T-34 as a working exhibit at the club’s war history museum to be founded at Gorodenko village. One reason that has delayed full use of the tank was that, under Estonian laws, the recovery group was obliged to wait five years to enter full possession of the tank. This period expired in October 2006 and the Otsing club and museum is now the full legal owner of the tank.

The restoration and overhaul of the T-34’s parts and components have been completed and the vehicle is now at the club’s workshop in the tractor park near the village of Sirgala (in the woods about halfway between Narva and Johvi), awaiting final re-assembly. The Estonians hope to achieve this in 2007, and finally realise their dream of being able to offer visitors to the museum a ride on a historic T-34 – and a turncoat one at that.

In sum, it's true that a boy's memories from 1944 led to a buried tank being found in the mud in Estonia in 2000. However, it's unclear where the vehicle is today. We don't yet know if the museum was ever fully established. The Otsing club's website showed dated pictures of a museum they hoped to one day open.

We emailed Mihail Zenov to learn more, including additional details about the man who, as a boy, saw the tank tracks in the mud in 1944. We will update this story should we receive a response.