Is Migrant Caravan Headed for US Because of Biden's Immigration Policies?

Biden's critics were quick to conflate immigration policies and misrepresent facts about a caravan of Honduras migrants. 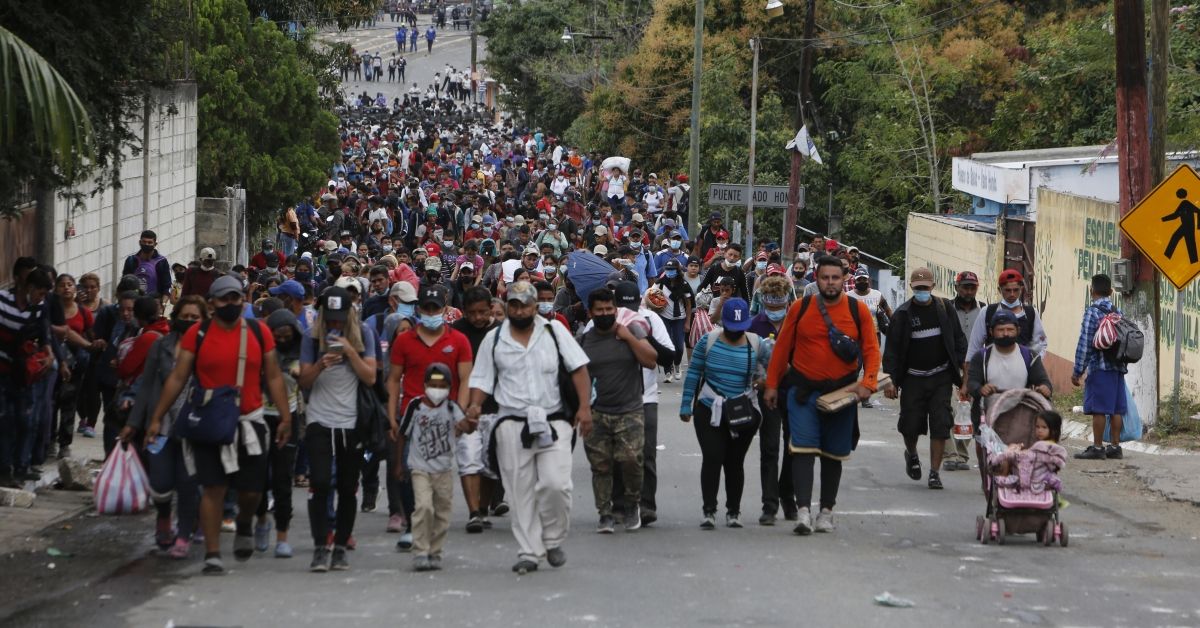 Claim:
In January 2021, a migrant caravan was headed to the U.S. because of President Joe Biden's changes to immigration policies.
Rating:

A caravan of thousands of Honduran migrants pushed its way into Guatemala in mid-January with hopes of eventually reaching the U.S. border. Some members of that group told journalists they were making the trip because of the Biden administration's approach to immigration.

By Jan. 20 — the day Biden took over the White House and signed several executive orders dealing with immigration — the caravan had reportedly dissipated. Additionally, had it continued, no evidence showed Biden's actions would have impacted the caravan's experience at the U.S.-Mexico border.

They included actions to end a ban on travel from some Muslim-majority countries and halt construction on a steel-and-concrete wall between Mexico and the U.S. that Trump framed as a solution to curb illegal border crossings by people fleeing poverty and violence in Central America.

Meanwhile, during the weeks before Biden's inauguration, a migrant caravan departed from Honduras and pushed its way through Guatemala, totaling between 7,000 to 8,000 people at its highest point, according to multiple reports from reputable news outlets.

Fleeing worsening economic and living conditions due to the COVID-19 pandemic and two major hurricanes, the group hoped to eventually reach the United States' southern border, where they would apply for American asylum or seek refuge in the country illegally.

Considering the caravan's timing, numerous people asked us to investigate if, or to what extent, Biden's stance on immigration — which was a vast departure from Trump's hardline approach — motivated the crowd of Honduras residents to make the trip or would aid their entrance into the United States. The claim was a mixture of truth and misleading information that misrepresented facts about the caravan and conflated American immigration policies.

First, we'll address the claim that the change in U.S. presidents was a factor in some people's decisions to flee Honduras or Guatemala and head north in early 2021.

In interviews with journalists, several members of the caravan expressed hope that the end of Trump's tenure and Biden's election would make it easier for them to escape poverty and violence in Central American and make the U.S. home. Those statements included:

Based on our research, no member of the caravan cited Biden's position on Trump's border wall, specifically, as a reason for their trip, discrediting any claims that stopping the barrier's construction invited migrants to America.

We should note here: The Hill tweeted a video of the latter interview, with which Fox News attempted to frame the man's opinions as potentially representative of the entire group, as well as a result of the federal government's decision to issue a 100-day moratorium on deportations for some undocumented immigrants under Biden.

It is true that Biden used his first day in office to revoke one of Trump’s earliest executive orders that made all roughly 11 million people living in the U.S. illegally a priority for deportations. Shortly after that, the Homeland Security Department announced the temporary moratorium on deportations “for certain noncitizens," beginning Jan. 22, the AP reported.

That meant people who traveled to, and started lives in, America without obtaining proper citizen documentation were no longer at risk of being sent back to the country from which they emigrated. Also, Biden proposed a bill that would provide an eight-year path to citizenship for those people, pending Congressional approval.

Those initiatives, however, have no direct effect on how, or under what circumstances, people physically enter the country at the Mexico-U.S border. The Biden administration did not immediately make, nor broadcast, significant changes to those processes, perhaps with the intention of avoiding a surge of immigrants at crossings.

For example, asylum seekers must wait in Mexico for hearings in U.S. immigration court, under Trump-era policies. On Jan. 21, Homeland Security said it would stop sending asylum-seekers back to Mexico but that people already returned should stay put for now, per the AP.

"[It] will take months to be fully up and running in terms of being able to do the kind of asylum processing that we want to be able to do," Jake Sullivan, Biden’s national security advisor, told reporters.

Now, let us discuss Biden's decision to halt construction of the border wall.

According to the AP, it is common for smugglers to guide people over or through the wall — which spans about one-third the length of the border as of this writing — and Border Patrol officials have said it was never meant to completely stop people from entering America, but rather to slow their advance.

That said, no evidence shows the caravan had planned its route to evade the barrier, undermining arguments that Biden's decision to halt its construction would make it easier for the crowd of thousands to enter America.

But perhaps the most egregious error in the claim was this: The caravan of thousands of adults and children no longer existed when Biden sat down in the Oval Office to reverse those above-mentioned Trump-era immigration policies.

On Jan. 19, with the U.S. still under Trump's presidency, Associated Press journalists in El Florido, Guatemala, reported that the "once large caravan" had "dissipated."

That news report and others said soldiers and police used tear gas and wielded batons to break up the group, injuring some members of the caravan, as well as organized government rides for thousands of them to return to their hometowns in Honduras.

Maximiliano Reyes, a Mexican deputy foreign minister, told news network Milenio authorities sent between 4,500 and 5,000 people back from Guatemala, with others considering their options, Reuters reported on Jan. 19. He estimated around 1,000 migrants had broken up into small groups and fanned out inside Guatemala.

Meanwhile, Mexico President Andrés Manuel López Obrador had sent thousands of National Guard members and immigration agents to stand guard at the country's southern border and block migrants from entering, according to the Associated Press report.

In sum, although it was true that some members of the caravan had publicly expressed hope that Biden's administration would make it easier for them to live in America, the changes to immigration policy on Biden's first day would not have affected the majority of the members of the caravan had it continued to the Mexico-U.S. border. Additionally, reputable sources reported that the caravan had broken up by Jan. 20, the date of Biden's inauguration, and was no longer headed for the U.S. border. For those reasons, we rate this claim a "Mixture" of accurate and misleading information.