Is the 14-Night 'Bora Bora Getaway' on Facebook Real? 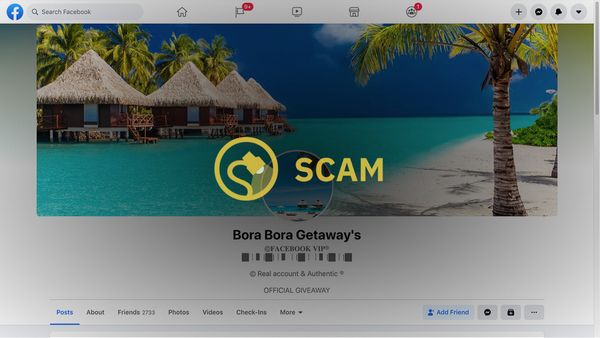 In February 2021, a new post on the Bora Bora Getaways Facebook page advertised a special giveaway. It promised "14 nights at the Le Meridien Bora Bora for 5 people." This Bora Bora getaway Facebook offer was not legitimate. It should be avoided for the possibility of phishing, identity theft, and other potential consequences. We strongly suggest that no personal information be submitted to any of these fake giveaways.

There was no indication that the real Le Méridien Bora Bora had any involvement with the scam.

?This March - We are giving away 14 nights at the Le Meridien Bora Bora for 5 people. Includes Flights, Accommodation & Transfers. You will have 2 years to use the holiday! To participate:
1⃣Like
2⃣Share
3⃣Comment: "WIN"
Closes 7th March at 9pm.

After Facebook users commented with the word "WIN," the scammers replied to each person telling them they won. "You win visit my profile."

For example, this person responded with "WIN." Then, a personal Facebook account that was renamed from Wanny Niji to "Bora Bora Getaway" responded:

ABOVE: This response was from a personal Facebook account. It was managed by someone who changed the name from Wanny Niji to "Bora Bora Getaway" to disguise itself to look like a Facebook page.

If the Facebook user clicked to visit the "Bora Bora Getaway" profile, they saw this: As a general rule, any Facebook giveaway that feels the need to type "REAL ACCOUNT" with emojis is probably illegitimate.

Eventually, the Facebook users who were trying to enter the fake giveaway were asked to visit a webpage. We chose not to link to the websites as they appeared to be dangerous. One looked like this:

Near the bottom of the page, entrants were asked to sign up for a purported streaming movie service as a next step. The "getaway" posts appeared to be a way for the scammers to receive a commission for affiliate marketing for signups on purported streaming movie websites.

Several Facebook profiles that promised a Bora Bora getaway advertised different streaming services. The entire ruse appeared to be an attempt to make affiliate money. The more people who signed up for the streaming movie website, the more referral commission the scammers received.

However, again, it should also be noted that there may be phishing, identity theft, and other dangerous motives involved.

This scheme bore similarities to previous reporting about Kosovo and suspicious Facebook activity. However, it was unclear if this Bora Bora getaway scam was coming from the same country.

In sum, a number of Facebook pages and profiles advertising a Bora Bora getaway were not legitimate. As a tip, always look for the "verified" checkmark next to a Facebook page or profile running a giveaway.