Did Russian Official Recommend No Booze for 42 Days After COVID Vaccination?

The "Sputnik V" vaccine at issue here differs from the vaccines nearing approval in the United States. 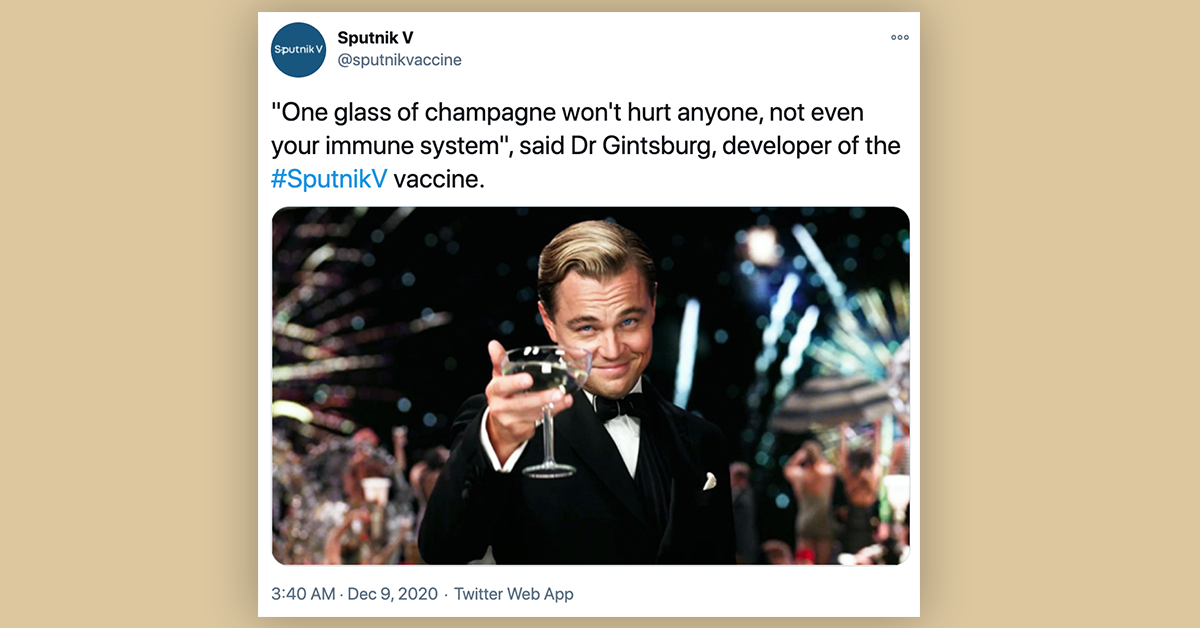 Claim:
A Russian health official recommended that people being vaccinated with Russia's Sputnik V Covid-19 vaccine abstain from drinking for two weeks before the first shot and 42 days after it.
Rating:

On Dec. 9, 2020, news of an especially stringent no-drinking recommendation endorsed by a Russian health official went viral in the United States, with stories appearing in the New York Post, New York Daily News and local outlets across the country. These stories reference a Dec. 4 interview on Radio Komsomolskaya Pravda with Tatyana Golikova, Russia's deputy prime minister for social policy, labour, health and pension provision. In the interview, she recommended that recipients of Russia's Sputnik V Covid-19 vaccine abstain from alcohol for two weeks before and 42 days after the first (of two) injections.

As has been widely reported, it is factual that Golikova made this recommendation, but health experts have criticized it as excessive. Alexander Gintsburg, the developer of the vaccine and the director of the research institute that invented it, went so far as to call it "fake news" on Twitter. "We’re not talking about a complete ban on alcohol," Gintsburg tweeted, "moderate consumption is allowed." He did, however, "advise refraining from alcohol for 3 days after each injection."

The Sputnik V account also tweeted a still of Leonardo DiCaprio holding up a glass of champagne from the 2013 film adaptation of "The Great Gatsby": The Sputnik V vaccine differs substantially from the Pfizer and Moderna vaccines that are at, or nearing, the final stage of approval in the United States. The Russian vaccine consists of two injections of a modified human adenovirus (a common virus which typically causes mild colds). The virus portion of the vaccine is different in each injection, but both adenoviruses have added genes that allow them to create small samples of the spike protein found in SARS-CoV-2, theoretically training the body's immune system to fight the virus. Both the Pfizer and Moderna vaccines are mRNA vaccines. They also induce the creation of the spike proteins, but do so without the use of a modified virus.

We reached out to Pfizer regarding any potential limits on drinking and vaccinating with their product, and will update our post if we receive a response.