Is the 'Bolton Strid' a Dangerous Stretch of Water?

England's so-called "killer creek" is often referred to as the most dangerous stretch of water in the world. 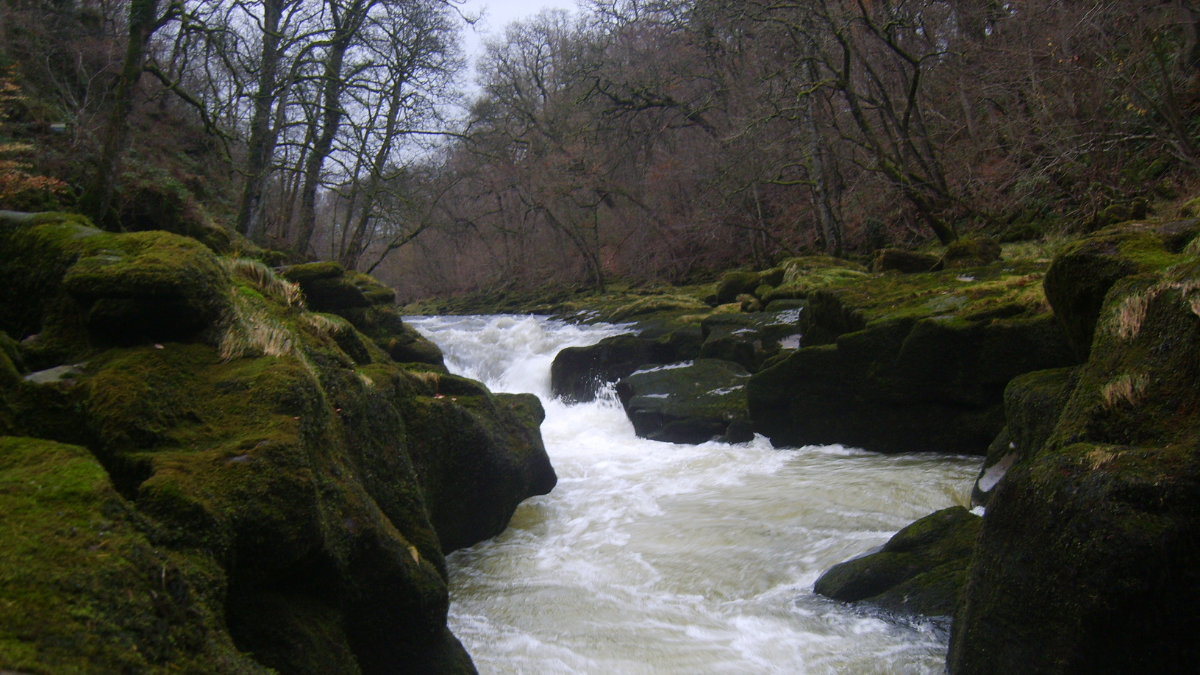 Claim:
A narrow waterway in England called the Bolton Strid is unusually dangerous and has been the site of numerous drownings.
Rating:

The Bolton Strid is a segment of the River Wharfe in England where the waterway drastically narrows and deepens, creating deadly currents that have claimed several lives over the centuries. However, a viral meme about the strid features a photograph of a calmer section of the River Wharfe, not the specific stretch of river known as the Strid. This meme reads: "Many people have died attempting to cross a seemingly calm creek called the Bolton Strid. The stream actually hosts multiple underwater cave systems and dangerous currents below the surface that have sucked numerous people to their deaths."

The contents of this meme are generally accurate. The above-displayed photograph, however, was taken by Flickr user Andy Hawkins in 2010 and shows the Bolton Abbey on the River Wharfe in England. The Bolton Strid is a specific section of this river that is much more narrow than the waterway showed in this picture. Here's a picture of the Strid from the Library of Congress: The narrowness of the Bolton Strid, in fact, is one of the factors that makes it so dangerous. The River Wharfe is a shallow but wide river, except for where it runs through the Strid. The river essentially flips on its side, creating dangerous currents that run through a series of underwater tunnels.

The Strid is a segment of the River Wharfe, which runs past the tranquil ruins of Bolton Priory, an ancient monastery. A few yards upstream from the Strid, the river is shallow and wide, about 30 feet from bank to bank. But then the terrain squeezes the river so tightly that it is effectively turned on its side. Instead of wide and shallow, it becomes narrow and deep, a powerful wedge of water racing through a crevasse riddled with underwater caves and overhangs. This is the Bolton Strid.

The Strid is often referred to as the "most dangerous stretch of water in the world." While this is a bit of a subjective statement, we can say that this stretch of water has truly claimed the lives of several people over the centuries. In 1998, for example, a honeymooning couple drowned after accidentally they went for a walk near the river and fell into the Strid. More than a century earlier in 1877, a man picnicking with friends and family drowned after he tried to jump across the Strid: 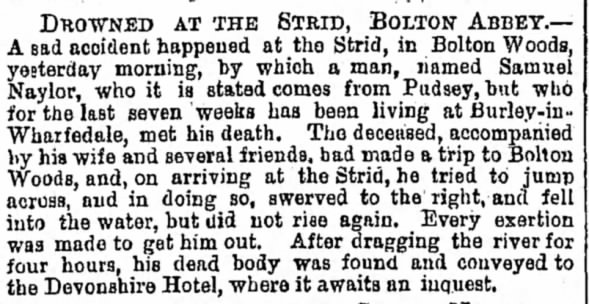 Poet William Wordsworth wrote about another young man who attempted to jump across the Strid in the 12th century. In Wordsorth's poem "The Force of Prayer; or, The Founding of Bolton Prior," he writes about a boy named William de Romilly of Egremont who drowned after attempting to jump over the Strid. Here's an excerpt from the poem:

Young Romilly through Barden woods
Is ranging high and low;
And holds a greyhound in a leash,
To let slip upon buck or doe.

The pair have reached that fearful chasm,
How tempting to bestride!
For lordly Wharf is there pent in
With rocks on either side.

This striding-place is called THE STRID,
A name which it took of yore:
A thousand years hath it borne that name,
And shall a thousand more.

And hither is young Romilly come,
And what may now forbid
That he, perhaps for the hundredth time,
Shall bound across THE STRID?

He sprang in glee,--for what cared he
That the river was strong, and the rocks were steep?--
But the greyhound in the leash hung back,
And checked him in his leap.

The Boy is in the arms of Wharf,
And strangled by a merciless force;
For never more was young Romilly seen
Till he rose a lifeless corpse.

The Most Dangerous Stretch of Water in the World: The Strid at Bolton Abbey, Yorkshire. www.youtube.com, https://www.youtube.com/watch?v=mCSUmwP02T8. Accessed 7 Feb. 2022.

“VIDEO: Shock as YouTuber Measures the Depth of The Strid, at Bolton Abbey.” Bradford Telegraph and Argus, https://www.thetelegraphandargus.co.uk/news/19587069.video-shock-youtuber-measures-depth-strid-bolton-abbey/. Accessed 7 Feb. 2022.