Was Lauren Boebert's Shooters Grill Replaced by a Mexican Restaurant?

We looked to see if the space previously occupied by Boebert's Shooters Grill restaurant truly was set to become Tapatio's Family Mexican Restaurant. 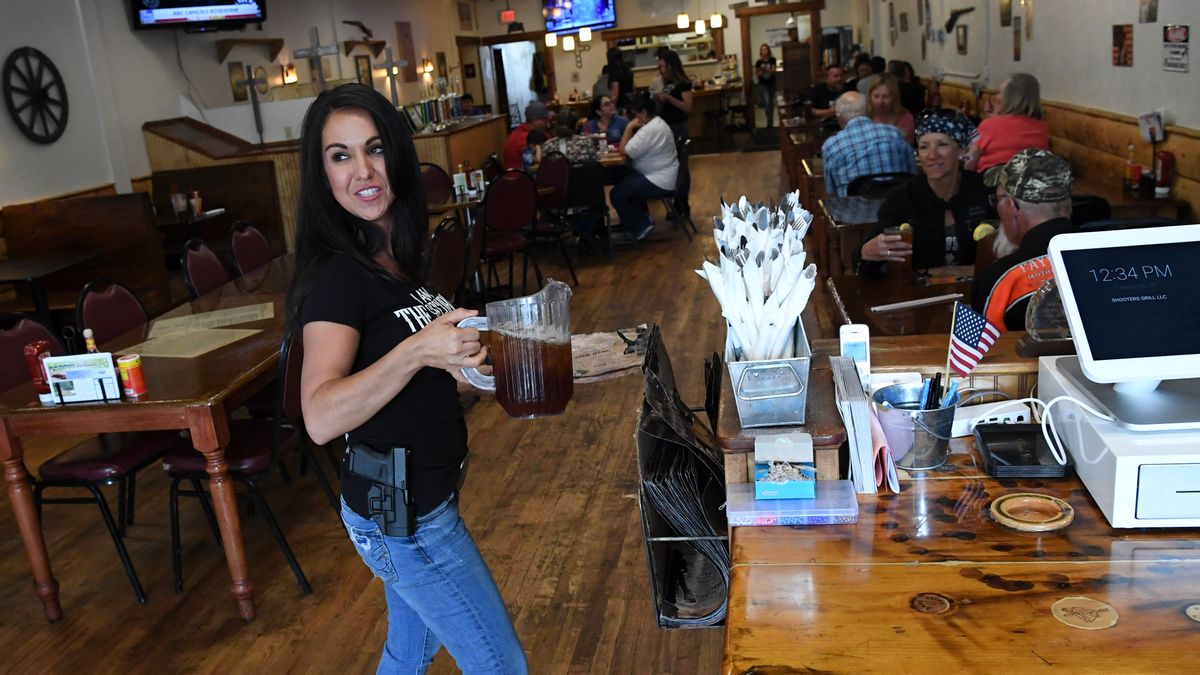 Lauren Boebert, owner of Shooters Grill, is photographed with a gun on her hip on May 29, 2018, in Rifle, Colorado. (Photo by RJ Sangosti/The Denver Post via Getty Images)

In late December 2022, we received reader inquiries that asked if a restaurant space previously owned by Colorado Republican Congresswoman Lauren Boebert and her husband, Jayson, was being replaced by a Mexican restaurant.

We confirmed by phone with a nearby business that this news was true. The restaurant space previously leased for Boebert's Shooters Grill was set to become Tapatio's Family Mexican Restaurant.

This news appeared to have first started spreading thanks to a Dec. 23 tweet. The tweet read, "Lauren Boebert's restaurant is being replaced by a Mexican restaurant!!"

A picture of the empty restaurant with a "Coming Soon" sign was included with the tweet. Still, we called around to confirm that the picture was real since the sign could easily have been faked with Adobe Photoshop. As previously mentioned, we confirmed it was real.

According to the replies under the tweet, users found the news interesting because of the Republican congresswoman's immigration policies.

Users also pointed to a past video that was posted in 2010 on a YouTube channel named Shawna Bentz (archived), the name of Boebert's mother.

In the video, Bentz and a friend named Lauren have a discussion about things each of them hate. The pair discuss an annoyance with "brown people," also referred to by them as Mexicans, playing loud music and crowding the local Walmart store on Sundays with their "whole entire family."

Years later, the description under the video was updated to read, "In no way do we hate brown people. We love all of God's people. This is just a rant of the everyday life."

The video has since been deleted from YouTube, but not before other users saved copies of the file. The part about playing loud music was featured on annelandmanblog.com, whereas the part about Walmart was shared on Twitter.

The New York Times previously reported in July that Boebert's Shooter Grill closed "after the building's landlord decided not to renew the lease." Boebert said that there was "no political motivation" to the landlord's decision.

Shooters Grill, a restaurant owned by Representative Lauren Boebert of Colorado where waitresses with guns holstered on their hips served "Shotgun" burritos, "Locked N' Loaded Nachos," "Swiss & Wesson" burgers and "Rifle Toast," closed on Sunday after the building's landlord decided not to renew the lease.

Ms. Boebert confirmed the closing in a statement posted on Twitter on Thursday afternoon, after being contacted by The New York Times, and said the landlord, Milken Enterprises, had "no political motivation."

Benjamin Stout, the communications director for Ms. Boebert, told The Denver Post in June that the lease for the congresswoman's campaign office, which is next door to Shooters, would also not be renewed by Milken Enterprises. Ms. Boebert's statement on Thursday did not address her campaign office and Mr. Stout did not respond to an email about it.

Boebert, Lauren. "Boebert: Let Me Draw Your Attention to the Crisis at Our Southern Border." The Denver Post, 13 May 2021, https://www.denverpost.com/2021/05/13/lauren-boebert-immigration-mylar-blanket/.

Jefferson, Andrea. "Lauren Boebert's Gun-Themed Restaurant Is Being Replaced by a Mexican Restaurant and People Are LOVING It." Political Flare, 25 Dec. 2022, https://www.politicalflare.com/2022/12/lauren-boeberts-gun-themed-restaurant-is-being-replaced-by-a-mexican-restaurant-and-people-are-loving-it/.

Valdez, Donald. "Valdez: Instead of Vilifying Immigrants, Boebert Should Focus on Meaningful Reform." The Denver Post, 20 May 2021, https://www.denverpost.com/2021/05/20/lauren-boebert-column-immigration-reform-donald-valdez/.