Did Police Find Bodies in Freezers with 'Black Lives Matter' Carved into Their Skin?

Reports that a Chicago man named Rasheed Thompson was arrested in connection with dead bodies found in his basement freezer were not real. 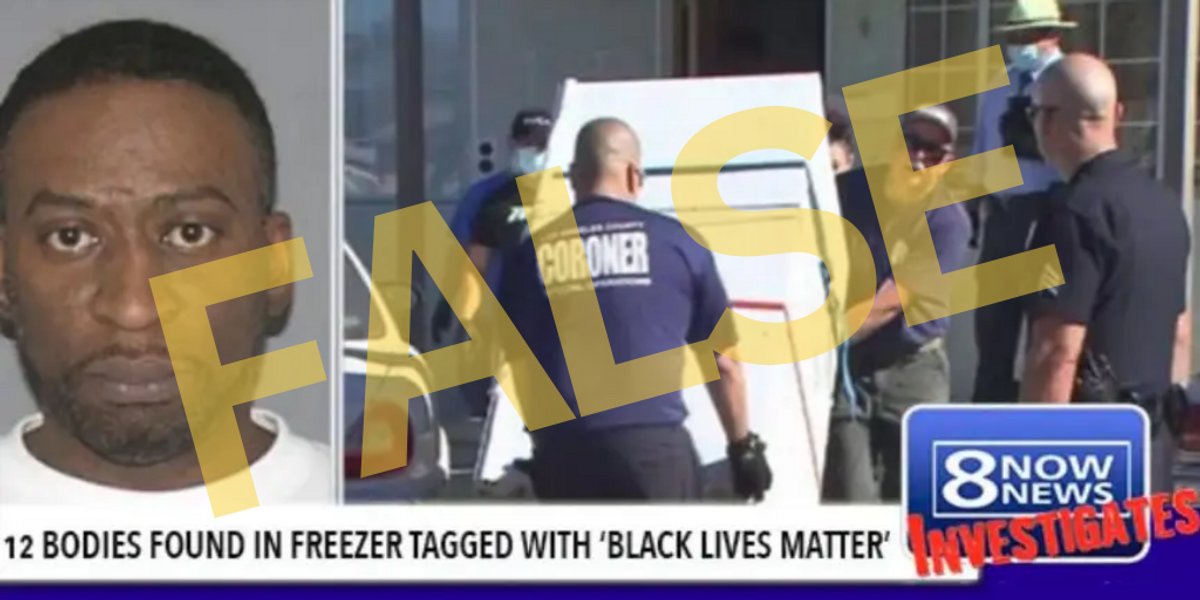 Claim:
Police in Los Angeles discovered 12 or 19 bodies in a freezer with "Black Lives Matter" carved into the victims' skin.
Rating:

On 17 February 2016, the dubious web site Now8News published an article claiming that police in Los Angeles had discovered a dozen female bodies in freezers in a private residence and that the corpses all had "Black Lives Matter" carved into their skin:

The Los Angeles corners department came across a gruesome discovery today when several neighbors called concerned about suspicious activity at a home in their neighborhood. Several 911 calls directed police to the 800 block of Woodland Avenue on Wednesday morning. Upon arriving at the scene, police knocked on the door to be greeted by a man who seemed “under the influence of drugs.”

Upon further investigation, they found a dozen frozen bodies within 6 freezers in the man’s garage. The bodies had several things in common – they were all white women in their mid-20s, blonde hair and all had the writings marked on them which read “Black Lives Matter” and “BLM.” Mathis, who was known for his involvement in the “Black Lives Matter” movement was arrested without incident and booked into the county jail on no bond. They are not releasing the names of the victims until the families are notified. Mathis tested positive for being under the influence of bath salts, which he says caused him to commit these horrible crimes.

Nothing about this story was true. It originated solely with Now8News, a fake news site that traffics in fabricated, sensationalized stories and clickbait headlines. On 18 February 2016, this story was copied by Empire Herald, another fake news site, (where the number of putatively discovered bodies was increased from a dozen to 19).

Now8News used old photographs that had nothing to do with their fake story to illustrate their article. Empire Herald also used photographs from older, unrelated news stories in their version. Neither Now8News nor Empire Herald carried disclaimers warning readers that their news articles are entirely fictional.