Did Bobby Leach Survive Niagara Falls, Only To Die After Slipping on Orange Peel?

Bobby Leach was the second person in history to survive the plunge over Niagara Falls. 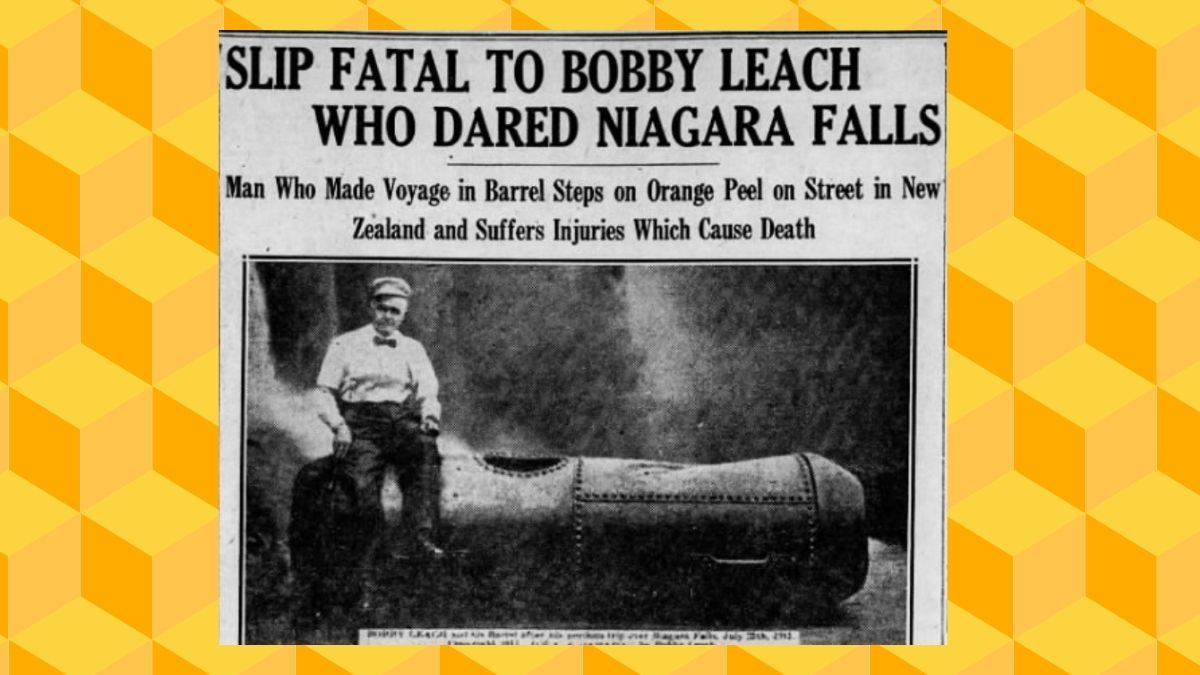 Claim:
After surviving a trip down Niagara Falls in a barrel, Bobby Leach died after slipping on an orange peel.
Rating:

On July 25, 1911, Bobby Leach became the second person to survive a trip down Niagara Falls in a purpose-built barrel. A few years later, Leach injured his leg when he slipped on an orange peel. The injury would require amputation and Leach died a few days after the surgery.

An image supposedly showing stunt performer Bobby Leach sitting on a purpose-built barrel next to Niagara Falls is frequently circulated on social media along with a seemingly ironic story about his death. According to the meme, Leach survived a trip over Niagara Falls in a barrel, only to die a few years later after slipping on an orange peel: This meme is largely accurate.

The man pictured here is truly Mr. Leach, he is really sitting on a barrel that he rode over Niagara Falls, and he truly did die after slipping on an orange peel. While Leach was the "first man" to survive going over Niagara Falls in a barrel, he was the second person to do so, as Annie Edson Taylor accomplished the feat 10 years prior in 1901. It should also be noted that Leach's death didn't immediately follow his slip on an orange peel. Leach injured his leg in the fall. After his leg got infected, he had to have amputation surgery. Leach then died due to complications from the surgery.

On July 25, 1911, Leach enclosed himself in a purpose-built barrel, floated down the Niagara River, and fell 167 feet down the Horseshoe Falls. Leach emerged from his barrel battered, bruised, and bleeding, but alive, becoming the second person in history to accomplish the feat.

The viral photograph is available via the Library and Archives Canada. Here's another image of Leach, a composite image that was used as a postcard, showing Leach and his barrel in front of Niagara Falls from the Library of Congress: LOC writes: "Postcard showing a composite photograph of daredevil Bobby Leach standing in the steel barrel he used to successfully go over Horseshoe Falls, July 1911. A view of the Falls appears in the background."

Leach survived the fall but he suffered a number of injuries. A photograph showing Leach's injuries from the falls (available via the Niagara Falls Public Library) notes that Leach broke several ribs and was in the hospital for 23 weeks following the ordeal. A few years after Leach's Niagara Falls feat, he embarked on a promotional tour in New Zealand. While walking near his room, he slipped on an orange peel on the street and injured his leg. The injury would become infected and would require amputation. A few days after the surgery, Leach died. 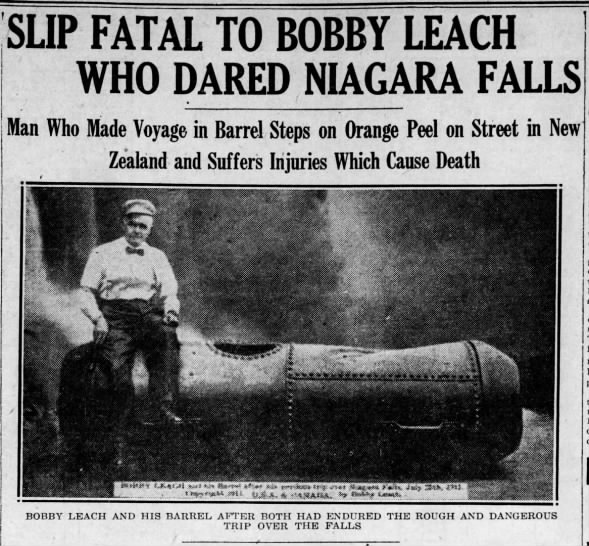 Here's an excerpt from an obituary for Leach that published in the New Zealand Herald in April 1926:

After a life of intrepid exploits and hair-breadth escapes, the actual incident that led to [Bobby Leach's] death seems like one of those ironies of fate that bestrew the pages of ancient fiction, for having defied death a hundred times he at last owed his end to a piece of orange peel. Mr. Leach had just concluded a lecturing tour in New Zealand and was strolling along the pavement close to his flat on Princes Street when he slipped on the orange peel and broke his leg. That was on February 26, since when he had been an invalid. There can be little doubt that the leg injuries he received during his memorable drift in the barrel were responsible for the weakening of the limb that was broken. Complications set in and on Monday the leg was amputated, but the patient weakened and died.

While Leach survived his trip over Niagara Falls, others weren't as lucky. William "Red" Hill, Jr., for example, attempted the stunt in 1951 but he never emerged from the waters. Interestingly, Hill was well-known in the Niagara area for rescuing people who had fallen into the river. Hill even rescued Leach a few times during previous unsuccessful stunts.