Is 'Bluetooth' Technology Named After a Viking King?

The name of the wireless technology standard apparently originated during a Toronto pub crawl one dark and stormy night. 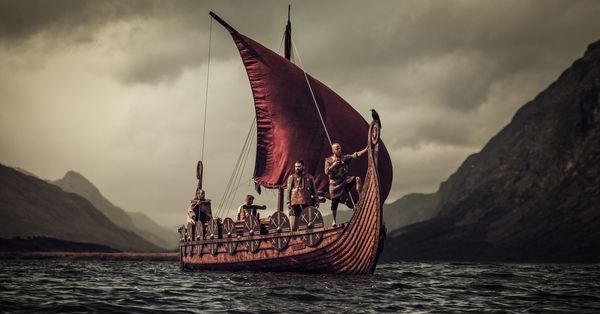 Claim:
The name "Bluetooth," which refers to the standard for shortrange wireless connections, is derived from Viking king Harald Gormsson, who is credited with uniting Scandinavia.
Rating:

Bluetooth technology has become ubiquitous since it was developed in the late 1990s, and its brand name is now synonymous with the product itself: It's a wireless method of "pairing" two different technologies using a short-range radio signal, such as linking a headset with a cellular phone.

The product's etymology has been the stuff of modern legend. The most enduring story is that Bluetooth company name was taken from the nickname of a Viking king who ruled during the 10th century and is credited with originally uniting Scandinavia.

It's enduring because it's true. Engineer Jim Kardach came up with the name in 1997:

Intel mobile computing engineer Jim Kardach was instrumental in bringing together Ericsson, IBM, Intel, Nokia and Toshiba to form the Bluetooth SIG in 1998. That group created the universal standard that is used by more than 17,000 member companies.

Kardach recalls playing the role of instigator and mediator among the founding companies, but says the group quickly agreed on a common goal to create a small, low-power consuming, low-cost, short-range radio with built-in security and the ability to connect ad hoc with other devices. Inspired by a book about Vikings that he was reading at the time, he came up with the Bluetooth name.

Back in 1996, a consortium of companies — Intel, Ericsson, Nokia, and later IBM — decided to create a single wireless standard. Each company had been developing their own short-range radio technologies, but all the names they came up with sucked. Then, along came an obscure Scandanavian king from the Middle Ages.

In Kardach's own words, the idea was developed during a while out drinking with colleague Sven Mattisson, where they were unsuccessfully pitching tech companies on the product:

After having our proposal firmly rejected, we went on a pub crawl through wintrily, blustery Toronto. Being a big history fan, I would trade stories of history with Sven.

Now Sven knew lots about radios, but not too much about history, but he had read this book (which at a later date he gave me a copy) called the Longships by Frans G. Bengtsson and would relate the history through this story.

In this book a couple of Danish warriors travel the world looking for adventure, and the king during this time was Harald Bluetooth.

When I got home from this business trip, a history book I had ordered called the The Vikings by Gwyn Jones" had arrived. Thumbing through the book, I found this (see Figure 2) picture of a giant rock, or runic stone, which depicted the chivalry of Harald Bluetooth, the guy which Sven just told me about!

Reading further, the book indicated that King Harald had this memorial made for Gorm his father and Thyri his mother: that Harald who won for himself all Denmark and Norway, and made the Danes Christian."

That unity made Bluetooth an appealing working name, since it securely builds networks (thereby unifying them) and playd to Kardach's love of history. The name stuck.

King Harald "Blåtand" Gormsson, also known as King Harald I, is remembered for unifying Denmark, converting the Danes to Christianity, and conquering Norway:

His accomplishments are inscribed in runic on a huge gravestone at Jelling, one of the so-called Jelling stones. Harald’s conquest of Norway was short-lived, however, and his son Sweyn I (Forkbeard) was forced to rewin the country. Sweyn also exhausted England in annual raids and was finally accepted as king of that country, but he died shortly thereafter. Sweyn’s son Canute I (the Great) reconquered Norway, which had been lost around the time of Sweyn’s death in 1014, and forged an Anglo-Danish kingdom that lasted until his own death in 1035.

It is thought that his nickname was Blåtand (Blátǫnn in Old Norse), meaning Blue Tooth, because he had a dead tooth that had turned bluish.

As Kardach wrote, the name was intended to just be a working title, but the alternatives were evidently forgettable (and in at least one case, cringe-inducing):

Harald had united Denmark and Christianized the Danes! It occurred to me that this would make a good codename for the program. At this time I also created a PowerPoint foil with a version of the Runic stone where Harald held a cellphone in one hand and a notebook in the other and with a translation of the runes:

In any case, the marketing group was formed under the leadership of Simon Ellis (Intel) and Anders Edlund (now with Bluetooth SIG) and they started working on official "names." The suggestion I just can't forget was "Flirt" with the catch phrase "getting close, but not touching." The naming process would continue for a long time.

The Viking era did not last long after King Harald, ending by the middle of the 11th century; Gormsson died around the year 986, reportedly during an uprising led by his own son, Sweyn. However, the original Bluetooth's legacy lives on every time devices are successfully paired.

The name is worked into the logo, as well: in it, you can see the Nordic runes that form the letters H and B, which stand for "Harald" and "Bluetooth."

"The Transition to Christianity: Christianity and Foreign Policy."     The National Museum of Denmark.