Did a Woman Find Human Ashes in a $2 Blue Heart Ornament?

An online advertisement promised a heck of a story. 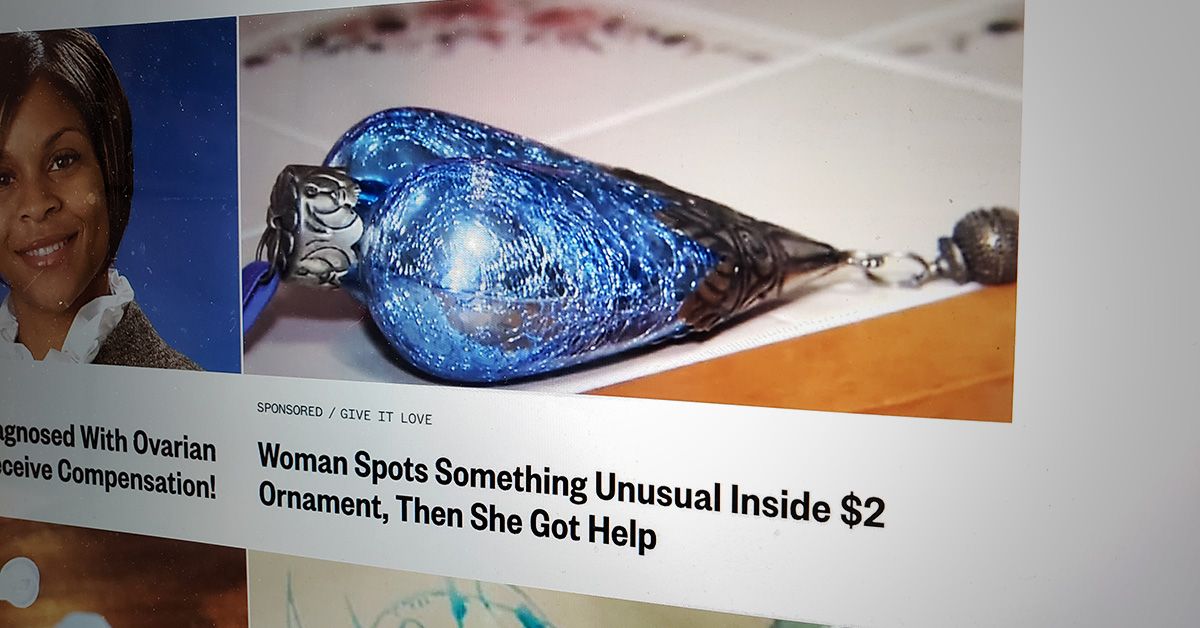 Since at least November 2020, an online advertisement with a picture of a blue heart ornament included the words: "Woman spots something unusual inside $2 ornament, then she got help." Another variation read: "Mom Buys Ornament At Thrift Store, Looks Closer And Realizes What Was Inside." Readers who clicked on the advertisement were led to a 44-page slideshow on the website GiveItLove. Unlike some other online advertisements that lead to viral content, often with nothing but misleading stories, this one about the $2 blue heart ornament was true. The story was posted across multiple viral content websites that led to lengthy slideshow presentations. The ornament was believed to contain ashes inside, although it was unknown if they were from a human or animal.

Priscilla Bailey was the woman mentioned in the ad and viral story. On Jan. 11, 2018, Bailey was a resident in Plymouth, Massachusetts, when CBS Boston reported the story:

A Plymouth woman is looking for the owner of what she believes is an urn.

Two weeks ago, Priscilla Bailey bought a blue and silver heart shaped decoration at Savers in Plymouth for $2.99.

"Right now it’s hanging up there when I do my dishes I sometimes stare at it," said Bailey. Thursday morning Bailey decided to take a closer look at the heart and discovered it has ashes inside.

Savers is a local thrift store. WCVB-TV in Boston also reported on the ornament, saying that it "seems to change color in different light":

Help From Her Daughter

Bailey then got some help in getting the word out about the ornament. The Boston Globe reported that her daughter, Kat Bartlett, who runs a side business making glass art, helped Bailey discover the ashes.

"She had put a flashlight up to it — and it’s ashes," Bartlett said. One of Bartlett's Facebook posts that asked for help finding the original owner of the ornament received at least 300 shares initially, though as of December 2020 it was unclear if the post was still publicly available.

Bartlett said she doesn't know how the glass ornament could have ended up in the store, but if she had to guess, it's possible that someone had cleaned out an estate or emptied a relative’s house and didn't realize what they were giving up.

To her, it doesn't matter. What matters is that it gets to where it belongs.

"It was probably a mistake," she said. "I just know I don't want one of my family members, whether it's an animal or not, in Savers for $2."

As of December 2020, we were unable to find any news stories that reported if anyone had claimed the ornament. However, we will update this story should any new information come to light.