Do People with Blue Eyes Have the Highest Alcohol Tolerance?

While a relationship between eye color and tolerance to alcohol may exist, the topic is far less clear than a meme suggests. 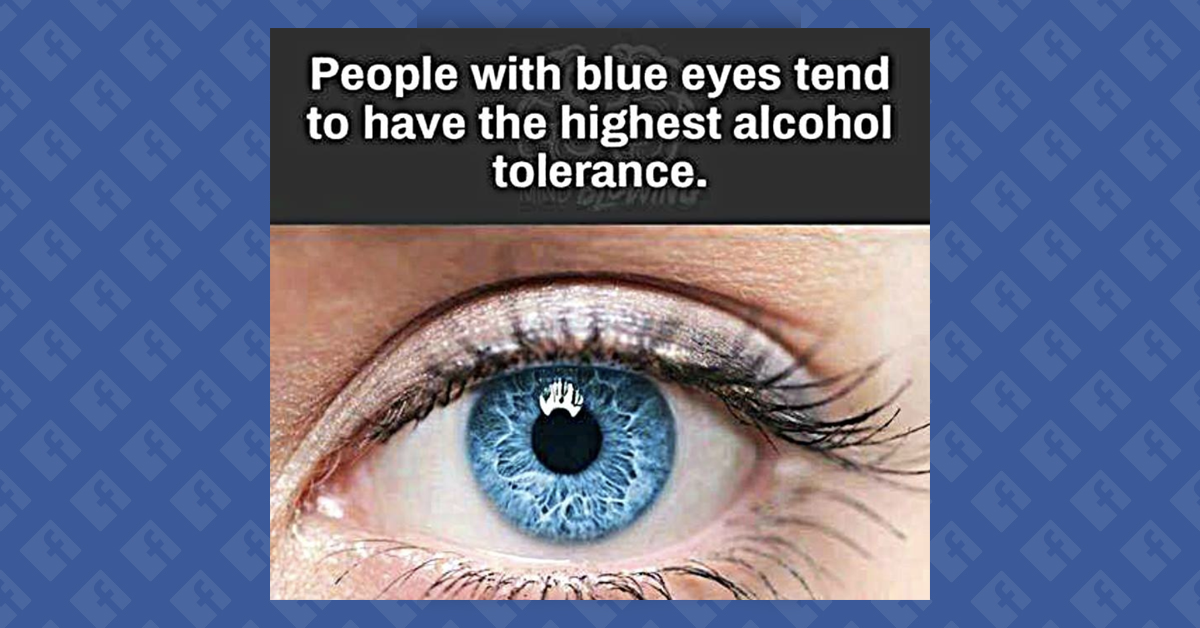 Claim:
People with blue eyes have the highest tolerance for alcohol.
Rating:

In 1999, Morgan Worthy, a research psychologist at Georgia State University, proposed the hypothesis that light-eyed individuals might be more likely than dark-eyed individuals to develop alcohol dependence. Worthy mentioned this idea in passing, after a discussion of other physical properties correlated to “dark eyes” that hinted at relationships between eye color and human behavior or function.

Eye color is determined primarily by variations in the number and particle size of just one pigment: melanin. Though other pigments may play a role, melanin is the main factor involved. More melanin results in darker eyes, “moving from blue to grey, green, hazel, brown, and black.” The amount and nature of melanin in the human iris is controlled or modified by multiple genes that serve other functions as well. That eye darkness is related to multiple genes with roles in different aspects of the human body makes finding a convincing link between eye pigmentation and human traits via genetics challenging.

In his book Eye Color: A Key to Human and Animal Behavior, Worthy made the argument that eye color and physiological reactivity (i.e., how a body physically responds to a stimulus of any kind) appear to be correlated, and that this fact could potentially demonstrate a link between eye darkness, alcohol tolerance, and alcohol abuse because it would mean that light-eyed individuals might have to consume larger quantities of alcohol to get drunk than others:

If dark eyes are positively related to physiological sensitivity this might be seen in a greater response to various drugs including alcohol. A greater or earlier response to alcohol might serve to decrease the amount of alcohol consumed by the steady drinker since a smaller amount would result in an equivalent effect. For that reason, persons who are most sensitive to alcohol would, perhaps, be less likely to drink enough to become physiologically addicted.

At the time, the notion was speculative. In 2001, researchers (also from Georgia State University) tested Worthy’s hypothesis using the information obtained from two separate surveys, one of 10,860 Caucasian male prison inmates, and another of 1,862 Caucasian women. In both samples, the researchers reported, “individuals with light eyes ... consumed significantly more alcohol than individuals with dark eyes.” This, they argued, supported Worthy’s alcoholism hypothesis:

The results may indicate that greater sensitivity to alcohol in dark-eyed individuals prevents them from drinking the large quantities of alcohol needed for development of physical dependence. Alternatively, greater behavioral inhibition may motivate light-eyed individuals to engage in alcohol consumption to achieve harm avoidance.

Generally speaking, it is this Georgia State University study, demonstrating that lighter-eyed folks generally drink more than darker-eyed folks, that people reference when they make memes about blue-eyed people having a higher tolerance for alcohol. For example, the website “MindblowingFacts.org” cited the study in a 2012 article that may have inspired later memes: That doesn’t mean the science is anywhere near settled, however, nor does it mean science has abandoned the question. While it is unknown exactly what mechanism would link eye color with alcohol dependence, one genetic explanation does jibe with the earlier research: a mutation on a gene that codes for the production of melanin (OCA2, the melanosomal transmembrane protein):

The OCA2 gene ... has a major impact on eye color by producing a protein that controls melanin formation and processing. The more OCA2 activity in the iris melanocytes, the darker the eye color ...

Why might having blue eyes put one at higher risk for alcohol dependency than having brown eyes? One possible explanation is that a gene lying near the OCA2 gene on [human] chromosome 15 carries a mutation that leads to increased alcohol tolerance, and thus a tendency to drink too much.

In 2015, a group of researchers from the University of Vermont and Yale sought to test the notion that dark-eyed persons, with their potentially greater sensitivity to alcohol, might have a lower incidence of alcohol dependence because they need to drink less alcohol to get drunk. To test that nation, the researchers looked for correlations between eye color and alcoholism in a representative sample of European-descended individuals. They did find a slightly increased risk of alcoholism in light-eyed individuals, hinting that eye color could be “a potential indicator of alcohol dependence risk.” A 2017 study approached the same question, albeit in a much more limited fashion, with a bit of breathalyzer field work. This work also supported the association:

In this field study carried out in a French barroom, we hypothesized that the average blood alcohol concentration of participants with blue eyes would be higher than people with other eye color. We measured blood alcohol concentration with a breathanalyzer among 61 customers from various occupational backgrounds, and calculated the association between eye color and BAC. Results showed that among males and females, irrespective of age, participants with blue eyes had a higher BAC than the others ... This ecological result suggests that iris pigmentation represents a biological marker for underlying factors involved in higher alcohol consumption.

Such studies remain limited in size, scope, and number, and are in some cases controversial. As a result, a more complete and confident understanding of the possible relationships between eye color and alcohol tolerance remains elusive, and the meme remains unproven.

Bègue, Laurent, and Jordane Boudesseul.   "Phenotypic Association of Alcohol Consumption with Eye Color: a Breathanalyzer Assessment.”     Journal of Substance Use.   31 May 2016.

Correction [5 February 2019]: An earlier version of this story suggested no pigment besides melanin plays a role in eye color. In fact, other pigments may play a small role in affecting certain eye colors.