Do restroom hand dryers spread disease by blowing germs and bacteria around? The jury is still out. 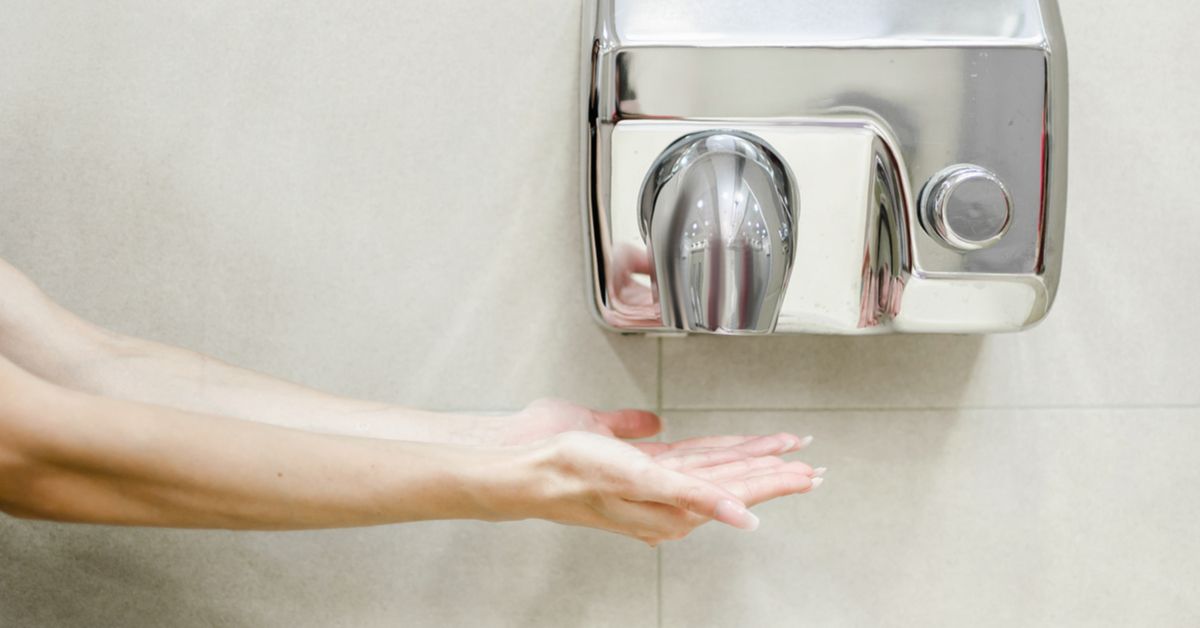 Image Via Focus and Blur / Shutterstock

An e-mailed alert began circulating in October 2009, holding that hot air hand dryers in restrooms were contributing to the spread of a flu virus:

Everyone in the cleaning industry has always been told that hand dryers in restrooms are not sanitary; they spread germs and bacteria around. I always thought that this just came from the paper companies because they are losing sales to the hand dryers.

A couple of years ago, I was working with a rep, and I noticed that after he washed his hands and noticed that there were no paper towels, only a hand dryer, he left the restroom with wet hands. I asked him about it. He said that hand dryers blow a lot of germs and bacteria around. He also told me to take a look under the hand dryer next time I was in a restroom.

There is a filter underneath the hand dryer that is supposed to be cleaned on a weekly basis. I looked at one and it looked like it hadn't been cleaned in years. It had layers and layers of caked on gunk (disgusting). Since then I will not use hand dryers in restrooms.

Now this is where the story gets really interesting. The schools and universities that have had the H1N1 (swine flue) outbreak this year are being told by the health department that they have to take out all of their hand dryers and replace them with towel dispensers because the hand dryers are spreading disease. Please pass this along so everyone knows not to use hand dryers.

The central claim that forced air hand dryers spread disease is in dispute, and we found no substantiation for this item's ancillary assertion that schools and universities that experienced outbreaks of swine flu had been ordered by their local health departments to replace such machines with paper towel dispensers. Try as we might, we found no confirmatory information about such institutes of learning being told by anyone (health department or otherwise) to remove their forced-air hand dryers.

Indeed, the Centers for Disease Control (CDC) recommends in various online publications that public sinks be stocked with paper towels or equipped with hand dryers (e.g., its Preventing the Spread of Influenza (the Flu) in Child Care Settings: Guidance for Administrators, Care Providers, and Other Staff states: "Ensure that sink locations and restrooms are stocked with soap, paper towels or working hand dryers").

Regarding the e-mail's central claim about hand dryers contributing to the spread of disease, there's no clear answer to the subject because what little research that has been done in this area is disputed. A 2008-09 research paper produced by academics at the University of Westminster claimed forced air hand dryers increased the average number of bacteria on the finger pads and palms. It also stated that the Airblade device (a super high-speed hand dryer relatively new to the market) had proved capable of dispersing microbes over a distance of up to two meters via a test involving the placement of petri dishes containing agar at 25 cm intervals to catch the particles and incubation of same to reveal any bacterial growth. The manufacturer challenged those findings, pointing out the study had been funded by the European Tissue Symposium, calling the work "flawed and questionable."

If there is any truth to the rumor that hand dryers that work by blowing hot air onto the just-washed paws of restroom patrons contribute to the spread of disease, it would lie not in the contents of these machines' lint filters (as the e-mail would have it), but in the poor handwashing practices of a significant portion of the general public. Despite their claims to the contrary, a goodly number of folks do not wash their hands after performing bathroom functions. According to the Minnesota Department of Health, (MDH):

An August 2005 observational study conducted by the American Society for Microbiology and the Soap and Detergent Association showed that while 97% of women and 96% of men say they always or usually wash their hands after using a public restroom, only 83% of adults actually did so. An August 2003 survey of handwashing habits in airport restrooms further bore out that observation: reported the American Society of Microbiology, more than 30% of people using restrooms in New York airports, 19% of those in Miami’s airport, and 27% of air travelers in Chicago didn’t wash their hands.

However, it is not the interaction of unwashed hands and hand dryers that is the concern (because, after all, no one is trying to dry unwashed hands, since they're not wet to begin with), but rather of poorly-washed hands. Precious few nasty microbes are dislodged by tap water alone: merely rinsing one's hands under running water and then drying them with a blower is doing little other than putting microbe-laden (albeit wet) hands in front of a wind generating machine.

Also, of those that use soap in the ablutions, not all that many wash their hands long enough to rid themselves of whatever nasties their hands have accumulated. For handwashing to be effective, folks need to lather up and then scrub for no less than 20 seconds before rinsing (roughly the same amount of time it takes to twice run through "Happy Birthday to You").

Those who don't wash all that well or for long enough are putting still-germy hands under a blower. Whether germs, microbes, or viruses could be blown off still-wet hands and into the surrounding air by such devices is an unanswered question, though.

Paper towels offer a couple of advantages that electric hand dryers do not. Since their use is frictional (you rub your hands with them), the act of drying with them can aid in the removal of some bacteria. Also, given that the four most microbe-laden areas of public restrooms are the toilet, the floor around it, the counter area, and door and flush handles, using a paper towel on the door handle when exiting the restroom rather than handling it directly can keep one from coming into contact with one of microbial "hot spots" of such venues.

However, paper towels also have their microbial downside as used ones are discarded in bins, which means whatever got wiped onto them is now lurking in a communal garbage can, happily multiplying away in that warm, damp environment.

One downside inherent to hand dryers is that folks tend not to use them correctly. Whether it's the noise, or a sense of the user's being made the center of attention, or just the amount of time such air blasting takes, people tend not to keep their hands under the blower until drying is complete, instead preferring to walk away with damp hands. (Which defeats the purpose, in that wet hands pick up microbes the way a magnet picks up iron filings.)

A study by the Mayo Clinic in 2000 found that four potential drying methods — paper towel, cloth roller towel, warm-forced-air dryer and "spontaneous room air evaporation" — were all about equal in removing bacteria.

In April 2018, the issue of a hand dryer’s potential ability to disperse and deposit bacteria captured the internet’s attention again thanks to a paper published in the journal Applied and Environmental Microbiology. That study cultured bacteria from dryers in 36 bathrooms at the University of Connecticut, finding higher levels of bacteria — including the disease-causing Staphylococcus aureus — from the dryer air than the bathroom air in general. That study concluded that “hand dryers [are] a possible mechanism for spread of infectious bacteria including spores of potential pathogens if present.”

Sightings:   In an episode of the television comedy The Big Bang Theory ("The Griffin Equivalency," original air date 13 October 2008), Sheldon Cooper rants about the university's decision to provide hand blowers rather than paper towel dispensers in the facility's restrooms, stating "Hot air blowers are incubators and spewers of bacteria and pestilence. Frankly it'd be more hygenic if they just had a plague-infested gibbon sneeze my hands dry."

American Society for Microbiology.   "As Many as 30% of Travelers Don’t Wash Hands After Using Public Restrooms at Airports."     15 September 2003.

Updated [12 April 2018]: Added information about a 2018 study published in Applied and Environmental Microbiology.