What Does a Blobfish Look Like in Its Natural Environment?

The "world's ugliest fish" isn't as ugly in its natural environment. 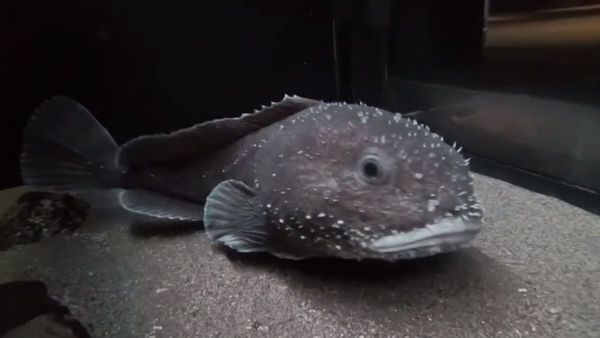 Claim:
A photograph shows what a blobfish looks like in its natural habitat.
Rating:

This is a genuine image of a living blobfish underwater. This photograph was taken at an aquarium in Japan, however, so "natural habitat" might not be the most apt description of the setting.

The blobfish is often regarded as the "world's ugliest fish" (it was even "awarded" this title during a British Science Festival in 2013) in large part because most people encounter this deep-water dwelling creature after it's been hastily pulled to the surface in a fishing net. The change in pressure between the blobfish's natural environment (a depth of about 3,000 feet) and the open air has a dramatic effect on the fish's body, and causes this deep-water creature to resemble, well, a blob. There are several species of blobfish in the family Psychrolutidae, all of which are deep sea dwellers that make their homes between 2,000 and 4,000 feet below sea level. At these depths, the pressure is up to 120 times greater than at the surface, forcing blobfish to adapt. They don’t have much bone or muscle, allowing the pressure of the deep sea to provide their with body structural support. When brought to the surface, the blobfish decompresses, giving it the iconic gelatinous look that we all know and love.

In its natural habitat, however, the blobfish is much less blobby.

In April 2021, an image started circulating on social media that supposedly showed a blobfish in its natural habitat: This is a genuine picture of a blobfish that was taken circa 2017 at an aquarium in Japan. While this may not be the blobfish's natural habitat, it does show a living blobfish underwater.

In 2020, the Aquamarine Fukushima aquarium caught another bobflish that was put on display. There are several photographs and videos of this blobfish, which which they lovingly named Bob, on the aquariums social media accounts:

Here's another video of Bob the Blob feeding:

The fish (Psychrolutes phrictus) is called blobfish or blob sculpin in English. Because the fish is grotesque appearance when it is caught as by catch in bottom trawling nets. But the living blobfish (we call Bob) is so cute with a big head, small eyes and many small fleshy threads like mustache. Bob started eating sweet shrimp (Pandalus eous). We believe that Bob will live long. Come see cute Bob!

For a true look at a blobfish in its natural environment, here's a video taken by the E/V Nautilus research vessel off the California coast in 2016: