A seemingly inadvertent hand gesture received some social media attention after it was shared out of context. 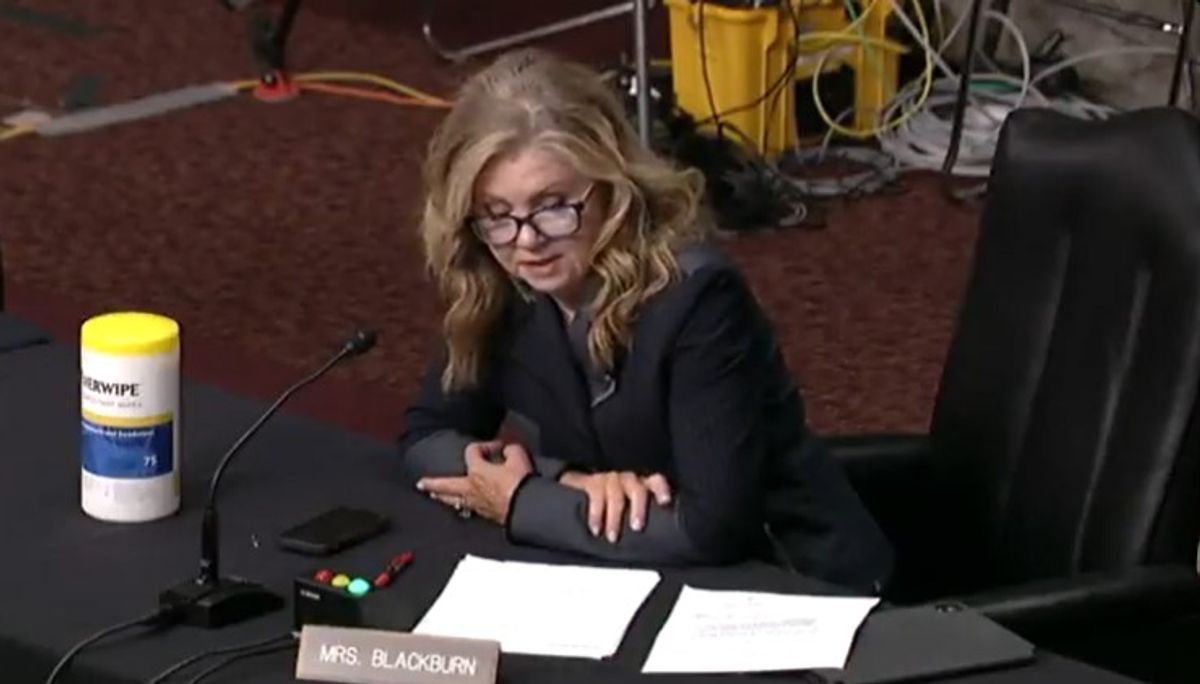 Claim:
Photos show Sen. Marsha Blackburn flashing a "white power gesture" during a Senate hearing (or vote) on the confirmation of Ketanji Brown Jackson to the Supreme Court.
Rating:

In April 2022, a picture was circulated on social media that supposedly showed U.S. Sen. Marsha Blackburn, R-Tenn., making a "white power" gesture during a Senate hearing or vote to confirm Ketanji Brown Jackson's nomination to the Supreme Court. This example was shared on Twitter: While the photograph is real, it was not taken during a hearing or vote on Jackson's confirmation, and there's no evidence that Blackburn was intentionally "throwing a white power sign" with her hand.

The picture appears to have been taken from video footage of an April 7, 2022, Senate Armed Services Committee hearing with Defense Secretary Lloyd Austin and Gen. Mark Milley. Blackburn posted a video of herself questioning these officials to her own Twitter account. The hand position above can be seen around the 1:30 mark of the following video.

While what is more generally known in the U.S. as the "OK" hand symbol has truly been adopted (or co-opted) by some white supremacists, not every instance of this gesture is necessarily related to a hateful ideology. In most cases, the OK symbol simply means "OK." The same gesture has also been used as part of a game and by Kappa Alpha Psi, a Black fraternity that was formed in 1911. In other cases, someone might rest their hand in this position without any thought or meaning behind it.

When we watched the entirety of the six-minute-long video of Blackburn's questioning, it seemed most plausible that Blackburn's hand position falls into the latter category: a random, momentary hand movement without any meaning behind it.

The notion that Blackburn was making a white power gesture appears to have been based largely on the false captioning of the photo by social media users who claimed it showed Blackburn gesturing during a hearing (or vote) on the confirmation of Jackson to the Supreme Court. As Jackson would be the first Black female Supreme Court justice in history, the hearings were fraught with racial undertones. The Washington Post reported:

But as the first Black woman nominated to the high court, Jackson also bears certain burdens that have become evident during her confirmation hearings. She has been subjected to questioning from some Republicans on the Senate Judiciary Committee that has been explicitly or implicitly all about race.

She has been asked about critical race theory and the history of America’s slaveholding past and whether she has been too lenient in her sentencing as a trial judge — issues that are cultural flash points in today’s caustic political debate but the first two of which have little to do with the actual work of the Supreme Court.

During Jackson's hearing, Blackburn asked the judge to define the word "woman" and accused Jackson of being an advocate for judges to consider critical race theory when considering sentencing. Blackburn voted against Jackson's nomination along with all but three of her Republican colleagues.

When this image was shared with the false claim that it showed Blackburn during Jackson's hearing, some social media users may have been primed to believe that Blackburn was acting out of some sort of racial malice. This, in turn, made it seem plausible, to some, that Blackburn was flashing a white power sign. But the image shown above was taken at an entirely different Senate hearing, one that was far less racially charged.

The claim that Blackburn made a white power gesture at Jackson's confirmation hearing (or vote) is false. While this is a real image of Blackburn, it comes from a different Senate hearing and no evidence has been provided to suggest that this was anything other than an inadvertent hand position.

“Remarks by President Biden, Vice President Harris, and Judge Ketanji Brown Jackson on the Senate’s Historic, Bipartisan Confirmation of Judge Jackson to Be an Associate Justice of the Supreme Court.” The White House, 8 Apr. 2022, https://www.whitehouse.gov/briefing-room/speeches-remarks/2022/04/08/remarks-by-president-biden-vice-president-harris-and-judge-ketanji-brown-jackson-on-the-senates-historic-bipartisan-confirmation-of-judge-jackson-to-be-an-associate-justice-of-the-supreme-court/.