Did a Statue Called Black Agnes Kill a Teenage Girl?

Horror legend holds that a teenage girl was found dead in the arms of a graveyard statue. 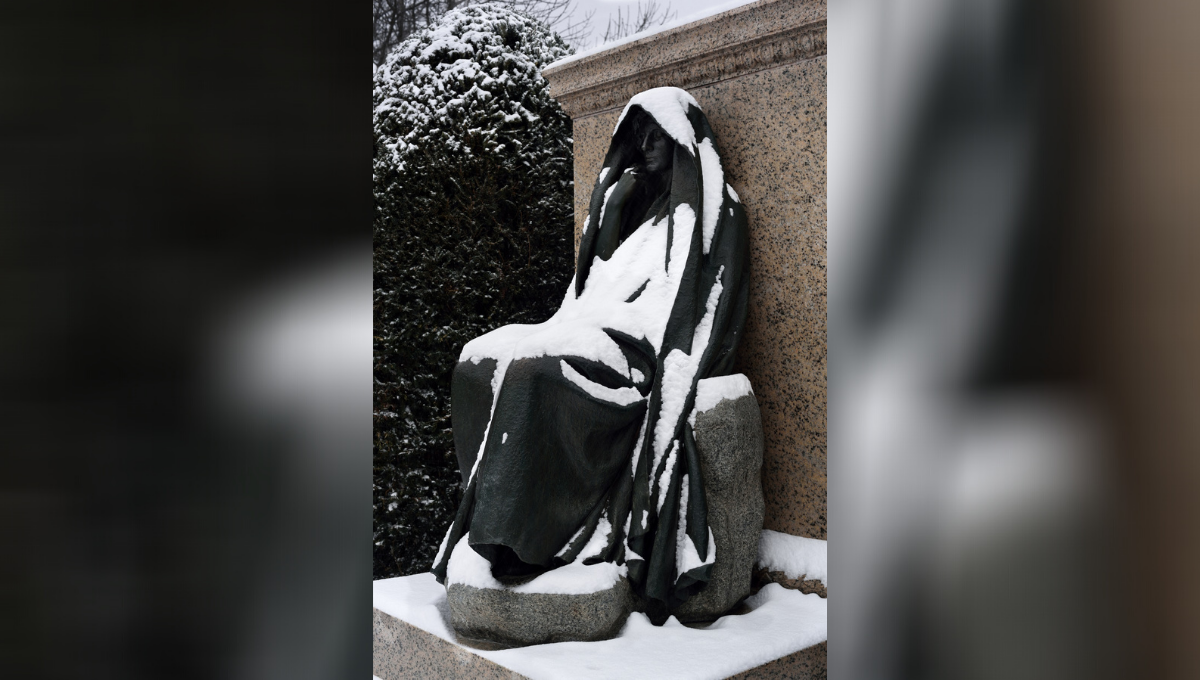 Claim:
A teenage girl who bets her friends she can spend the night in a cemetery is found dead in the arms of a graveyard statue.
Rating:

Told as having happened in various parts of the United States, this legend has been with us for quite a while. The victim is always a teenage girl, and a sorority initiation dare is what usually serves to impel her to sit in the statue's lap. The flourish in the example below that tells of the girl being related to the man who'd done the ghost wrong is unusual: most versions make no mention of a connection between victim and murderous spirit. (It's probably more frightening that way, because then the victim could very well be anyone.)

A marble gravestone in an old deserted cemetery in West Virginia was the legend trip site for a particular group of young adults in the vicinity. The marble statue was of a seated lady, her hands outstretched to all that pass by the resting place. The legend stated that the woman in the grave had died of a broken heart when jilted by her fiancé. The legend trip was an initiation rite: new members had to spend the night sitting in the statue's lap. But the last time anyone tried this, the young woman who sat in the statue's lap met with a tragedy. The difference, you see, was that the young woman was a direct descendant of the fiancé!

The next morning the young girl was discovered, still sitting in the statue's lap. She was dead. On her body were found marks as though she had been held in a superhuman clutch. Perhaps the seated lady had gained revenge.

Other versions have it that just falling under the statue's malevolent gaze is enough to seal one's fate:

I remember reading a story about a graveyard in the Midwest (Chicago?) with a statue in it called "Black Aggie". It was said that if you fell under her gaze after dark, you would die. They say her eyes glow red at night.

The "killing statue" story is closely related to another venerable legend, that of the girl who accepts a dare to spend a night in the graveyard. (Variations on its basic theme go back to the Middle Ages in Europe.) As part of the dare — or prompted by her own disrespect — she plunges a knife into a grave. In the morning she's found lying dead across the plot, the knife pinning her skirt to the ground having prevented her from escaping. Died of fright, they say, with a look of terror etched on her face. (One is left to work out whether a ghost had actually killed her, or whether her fear at finding herself held to the grave had done her in.)

My grandmother used to tell this: A young girl had a pajama party with several of her teenage friends attending. Shortly before midnight she told her guests that there was a grave in the edge of the woods behind her house and anyone going there on a full moon and standing to close to the grave would be pulled into the grave by the bony hand of the old man buried there. One 15 year old girl scoffed at the story and after much teasing accepted the challenge of going alone to the grave. As proof she had actually gone all the way she was to stick a fork into the top of the grave for inspection by all the others the next morning. The girl left and did not return. The others mourned her absence until morning - afraid to wake the adults in the house - fearful they were in serious trouble. Next morning they all huddled together and nervously made their way to the grave. There they found their friend lying dead beside the grave with her long night gown pinned to the grave where she had stuck the fork thru her night gown and into the hard clay covering the grave.

We all thought this was a true story until we got older.

Getting back to killer statues, we note the legend of Black Agnes is peculiar to Baltimore, Maryland, and it sprang up around a sculpture that started out as a grave marker in Loudon Park Cemetery. The evocative statue of a seated, mournful figure of indeterminate gender was christened Black Aggie, and fraternity/sorority initiations sprang up around it. In an effort to thwart those rituals, Black Aggie was moved to Druid Hill Park. The problems continued there, so in 1967 the statue was dispatched to the Smithsonian Institution. She now resides at the federal courts building in Washington, D.C., off I Street, in a rear courtyard of the Dolley Madison House.

The statue did once mark a final resting place in Baltimore — but not of a woman, as you might suppose. No, the person buried under Aggie was Felix Agnus (1839-1925), a Union Civil War general. Facts be damned though, kids were determined to believe Aggie was the representation of the person in the grave, and further that the dead person had died a heartbroken woman, hence her need to wreak vengeance from the other side. Aggie's eyes were said to burn bright red at midnight, permanently blinding anyone foolish enough to look into them. Lying in her arms was said to be fatal.

Up against that, a Civil War general wouldn't even register. Even if he were one that H.L. Mencken once said had so much lead in him that "he rattled when he walked."

Oddly enough, the statue that started out in Baltimore and ended up in Washington was a copy of one already in Washington. The original can be found in Rock Creek Cemetery, where it marks the graves of Marian and Henry Adams. In 1866, depressed by the death of her father, Marian Adams swallowed potassium cyanide while her husband was paying an emergency Sunday visit to his dentist. Grief-stricken over her loss to the end of his life, Adams commissioned a special monument from the well-known sculptor Augustus Saint-Gaudens. The statue has come to be called "Grief," although it never was officially so named either by its creator or its patron. There is no writing to be found on it, so very few know it's actually the grave marker of both Henry and Marian (he joined her underneath there in 1918) and not just a lovely bit of statuary.

It's ironic that the original statue (which is erected over the grave of a grief-stricken woman) never became a target either for fraternity initiation rites or for murdering ghost legends, whereas the Baltimore copy (erected over the grave of Civil War General who'd lived a full and rewarding life) did. Just goes to show that facts never get in the way of a good ghost story.

A number of communities have "killer statue" legends, and Black Agnes is only one of them. Adding to the confusion is the superimposing of one legend onto another. A scary pre-teen belief has it that chanting "Bloody Mary" or "I believe in Mary Worth" a specified number of times in front of a darkened mirror will cause a vengeful spirit to appear. At times this gets crossed up with Black Agnes legends and the chant is rendered as "Black Aggie" or "Black Agnes."