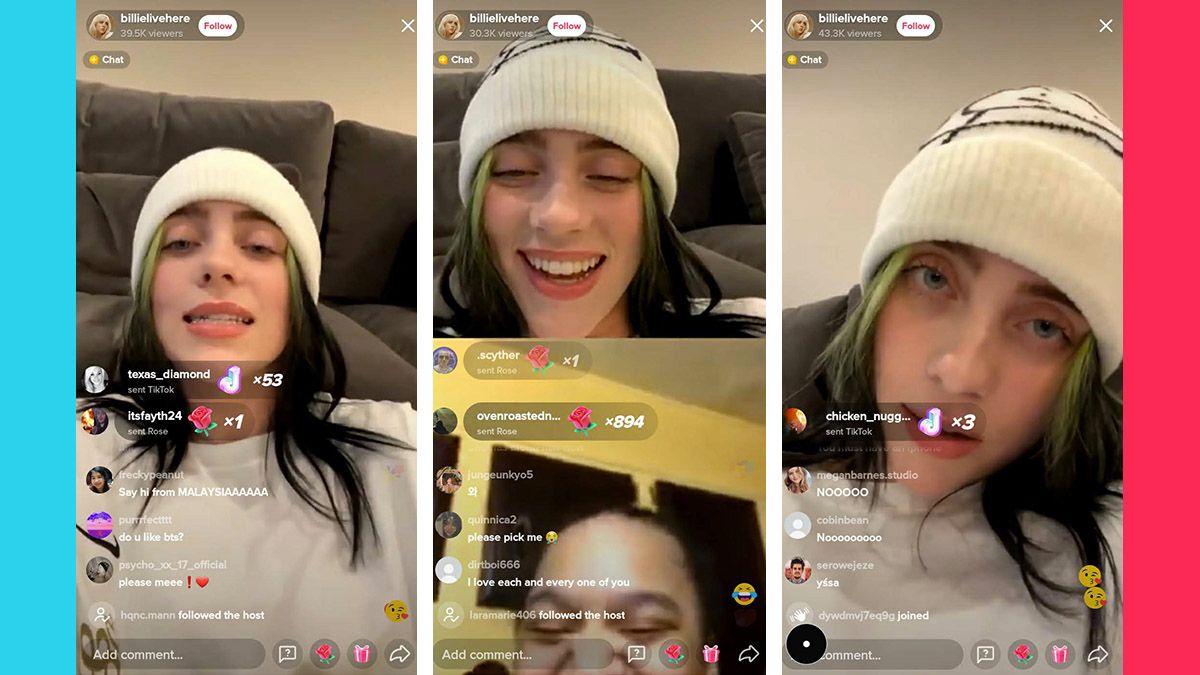 Claim:
Billie Eilish livestreamed from @billielivehere on TikTok in the early hours of June 24, 2021.
Rating:

An old livestream from Billie Eilish was replayed live months later by a TikTok account posing as the musician, fooling thousands of viewers in the process.

In the early hours of June 24, 2021, singer and songwriter Billie Eilish appeared to be livestreaming on TikTok as @billielivehere.

Then on July 5, it happened again under the name @billibillieeilishlive. Was she live?

TikTok commenters, some of whom were fans of Eilish, begged the musician in the comments to be chosen to go live with her. It appeared that she was indeed randomly selecting several fans and talking to them during the stream. One comment was posted constantly: "Pick me!"

While the live video did indeed show a 19-year-old Eilish doing a livestream, she was not live on June 24 or July 5. An unknown TikTok user simply replayed an old livestream video during a new live broadcast from a TikTok account posing as Eilish.

At the end of the old Eilish livestream, she says goodbye to her fans. After the old stream replayed on TikTok once and Eilish bid farewell, the video immediately restarted. This was the moment that the TikTok viewers who stuck around realized that they had been fooled.

We were able to locate the same archived livestream on YouTube, which matched content seen during the fake Eilish livestream on TikTok. It may have originally occurred on Jan. 27.

The TikTok accounts that played the old Eilish livestream were named @billielivehere and @billibillieeilishlive. The TikTok accounts went live and appeared in the feeds of at least hundreds of thousands of people. In fact, the total number of people who saw the old livestreams replayed on TikTok likely went well into the millions.

At one point on June 24, more than 43,300 people were watching @billielivehere at the same time at around 3 a.m. EDT, a massive audience for the dead of the night in the United States. It's not known for how long the account was streaming, but it appeared to be for at least one hour.

A zoomed-in screenshot showed at least 43,300 live viewers at one moment during the stream.

The account also had more than 60,000 followers after being created hours before. After the fake stream began, it was receiving new followers at a rate of more than 1,000 per minute. Later on June 24, the account was no longer available.

Eilish's real TikTok account is @billieeilish. One easy way to tell if a big celebrity is actually livestreaming is to look for the verified badge of a white checkmark in a blue circle.

Big-name celebrities will have a special verified badge on their social media accounts.

Eilish has a verified badge on her TikTok profile.

In March, Eilish won the Grammy Award for record of the year for "Everything I Wanted," a year after winning the same award for "Bad Guy."

For more coverage of TikTok rumors, hit up our TikTok Rumors tag.

On July 5, another fake Billie Eilish livestream popped up again on TikTok.