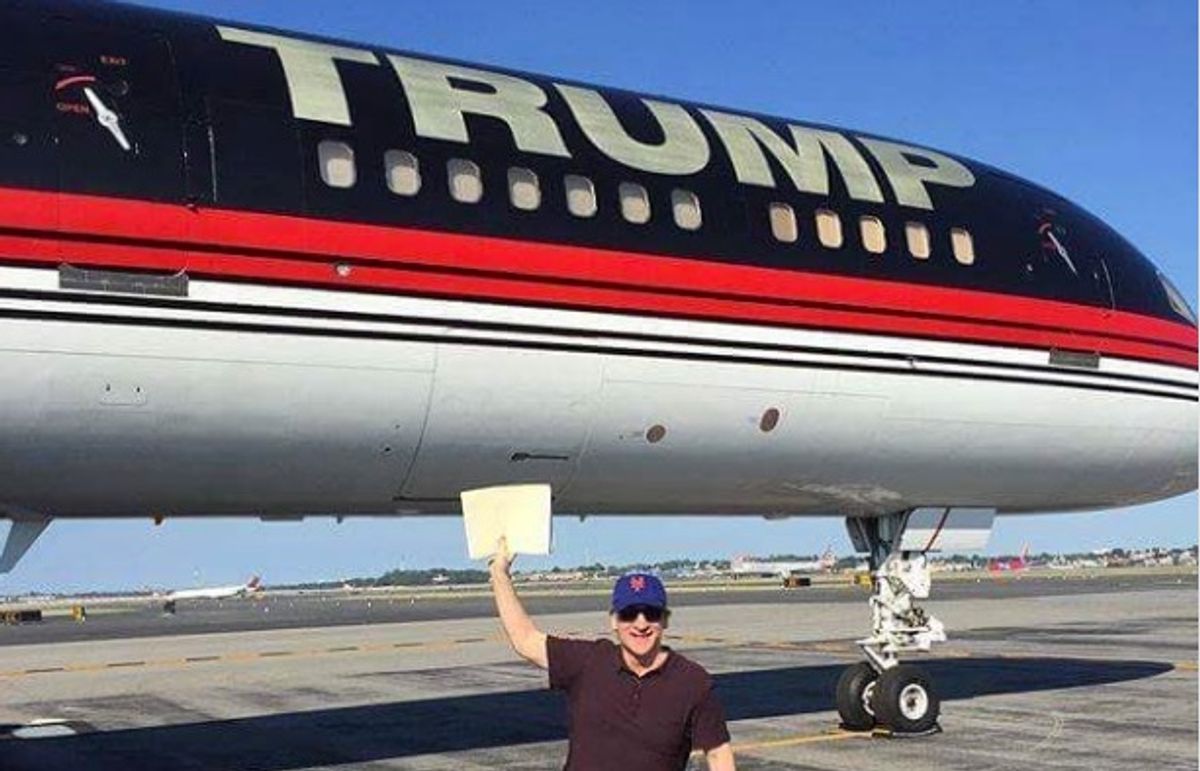 On 28 August 2016, comedian Bill Maher and filmmaker Michael Moore engaged in what was a fairly obvious humor bit on social media regarding the much discussed tax returns of Donald Trump.

As of late August 2016, Trump had not made his tax returns public, despite a decades-long tradition among politicians seeking office to do so. On 28 August 2016, Moore published a series of tweets and an Instagram post while apparently attending a baseball game with Maher: Blocks from the "birthplace" of Donald J. Trump in Queens (we believe he was actually born in… https://t.co/9JlI7EcE8a

So sitting next 2 the Mets stadium is LaGuardiaAirport-& what do u think is sitting there in full view? Trump's plane! So, we had an idea... — Michael Moore (@MMFlint) August 28, 2016

Moore also posted a variation of the story to Facebook, alongside the same photograph of Maher apparently emerging from a Trump jet with a nondescript manila envelope in his hand:

So sitting next to where the Mets play is LaGuardia Airport-- and right there in full view of everyone is Trump's plane! Bill saw it last night when he landed there and posted on Instagram that he ran up the stairs and into Trump's jet and "stole his peanuts." A day later, the plane is still parked there! So we had an idea. I said,"Bill, you know he's probably been guarding those tax returns he doesn't want anyone to see with his life. He probably takes them with him wherever he goes! They're probably sitting on that plane right now!" So Bill runs up the steps and onto Trump's plane and re-emerges with...wait... Trump's tax returns! So easy!

The stunt received some media coverage (as it involved two high-profile, politically involved entertainment figures) most of which consistently framed it as a joke.  However, within days, social media users began believing that the claim was meant to be straightforward.

Neither Moore nor Maher explained the mechanics of the bit (such as how they came to be on the steps of what looked like Trump's plane, or on a presumably secured LaGuardia runway), further advancing the idea the claim was genuine.  The likeliest explanation for the photographs was that Maher and Moore were in the process of boarding a private plane that happened to be adjacent to a Trump jet, and Maher was simply photographed holding a plain folder on and next to the craft's steps.

No part of the tweets suggested that the stunt was anything but a humorous take on the absence of Trump's tax returns, and neither Moore nor Maher has referenced the bit in any way since the 28 August 2016 tweets were published (as they certainly would have had they captured a major election year scoop). Even if the the scenario took place — presuming Maher boarded a Trump plane without permission with the intent of "snatching" private documents — there was no plausible reason that Trump's personal papers would be stored on the jet, or that an aircraft transporting a high-profile presidential candidate would be unsecured on a relatively public runway.