Did President Trump Share a Photo of a 'Bikers for Trump' Member with a Nazi Tattoo?

President Trump may have greeted the 'Bikers for Trump' at one of his golf courses, but he didn't tweet a photograph of one of them bearing an 'SS' tattoo. 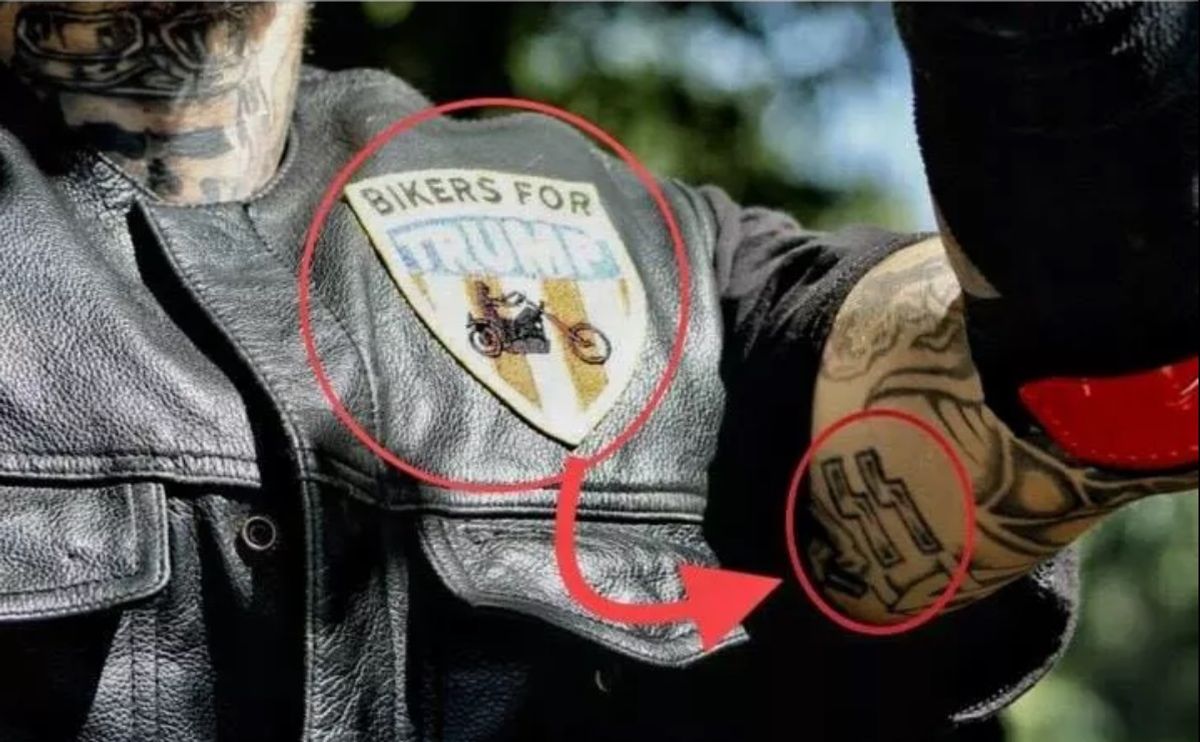 Claim:
President Trump shared an image of a "Bikers for Trump" member with Nazi tattoos, one of those who visited him at his golf club in Bedminister.
Rating:

This photograph was not shared by President Trump in his tweet about "Bikers for Trump" visiting his golf course in Bedminster, New Jersey. The text shown above was taken from a tweet posted by President Trump, but that tweet did not include the photograph seen above.

The President posted four photographs from the Bedminster event, none of which (as far as we can tell) prominently featured a biker with a Nazi tattoo on his arm. Here's a screenshot of President Trump's actual tweet: The biker photograph itself was snapped by Lauren Hudgins at the right-wing "Patriot Prayer" rally held in Portland, Oregon, a week before Trump's Bedminster event:

This is one of the dudes I saw today at the #PatriotPrayer rally with just straight up Nazi tattoos. pic.twitter.com/hI5nMiizqr

It's unknown exactly who first combined President Trump's tweet with the photograph of the "Bikers for Trump" member bearing the apparent Nazi tattoo, but that idea was suggested by Twitter user @ASchmalbert shortly after Trump posted his message about the bikers' visit to Bedminster (although that suggestion did not state that the resulting mash-up should necessarily be cast as something the President himself had tweeted in its entirety): The pictured tattoo appears to be an SS Bolt, a white supremacist symbol derived from Schutzstaffel (SS) paramilitary organization in Nazi Germany. (Some social media users offered that the tattooed "SS" was just the latter part of a larger tattoo showing the KISS rock band's somewhat similar logo. This argument doesn't appear to be valid, however, as the SS symbol in the biker's photograph does not appear to be preceded by the letter "I.")

The Anti-Defamation League (ADL) noted that while SS Bolts are symbols commonly used by white supremacists and neo-Nazis, it's difficult to determine a user's intent based solely on a picture:

The photograph of the "Bikers for Trump" member with an 'SS' tattoo on his arm was taken in Portland, Oregon, during a "Patriot Prayer" rally. That photograph was not shared by President Trump, nor did any other information suggest the same person was in attendance at the 'Bikers for Trump' rally in Bedminster, New Jersey.